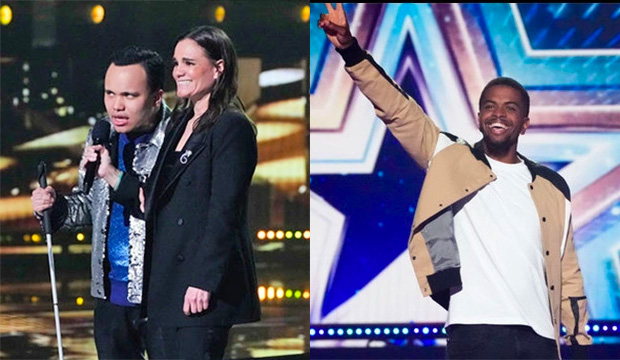 Over the first two weeks of “America’s Got Talent: All-Stars,” the superfans had the option of voting for people who’d already won various “Got Talent” shows around the world, or branching out and anointing other talented acts. So far, they’ve chosen to snub former winners. Champions like Terry Fator (“AGT” Season 2) and Dustin Tavella (“AGT” Season 16) failed to earn enough votes from the superans to advance to the Finals, so they were eliminated from the competition (barring any future wild card save). What does this mean for upcoming fan-fave contestants like Kodi Lee and Brandon Leake, who won their original “AGT” seasons?

In Week 1 (which aired January 2), the two winners competing were singer Jeanick Fournier from “Canada’s Got Talent” Season 2 and ventriloquist Terry Fator from “America’s Got Talent” Season 2. After light-up dance group Light Balance Kids earned Howie Mandel‘s Golden Buzzer, the superfans voted for their Top 3 acts of the night. They chose to advance acrobatic trio Bello Sisters to the finale, while Terry nabbed their runner-up spot and singer Caly Bevier placed third.

SEE Simon Cowell disses Sethward ahead of ‘America’s Got Talent: All-Stars’ premiere: ‘I don’t like him’ [WATCH]

In Week 2 (which aired January 9), the two winners competing were beatboxer & flautist Divyansh & Manuraj from “India’s Got Talent” Season 9 and magician Dustin Tavella from “America’s Got Talent” Season 16. Host Terry Crews pushed his Golden Buzzer for chorale group Detroit Youth Choir, and then it was the superfans’ turn to have their say. Their favorite act was aerialist Aidan Bryant, while their number-two choice was Divyansh & Manuraj and their third place finisher was ballerina Vitoria Bueno.

The two remaining American winners, Kodi Lee and Brandon Leake, have found great success since triumphing on their original seasons. Both acts headlined “America’s Got Talent Las Vegas Live” at the Luxor Hotel and Casino and both continue inspiring fans around the world. So the question remains: will the all-powerful superfans feel the need to give them another win, or will they instead snub them like they did for Terry Fator and Dustin Tavella? Stay tuned.

“America’s Got Talent: All-Stars” is a spin-off of the popular “AGT” summertime series. Terry Crews is back as host, along with judges Simon Cowell, Heidi Klum and Howie Mandel. At the end of this eight-week competition, one act will earn the title of “Got Talent Superstar” and take home the $25,000 cash prize.