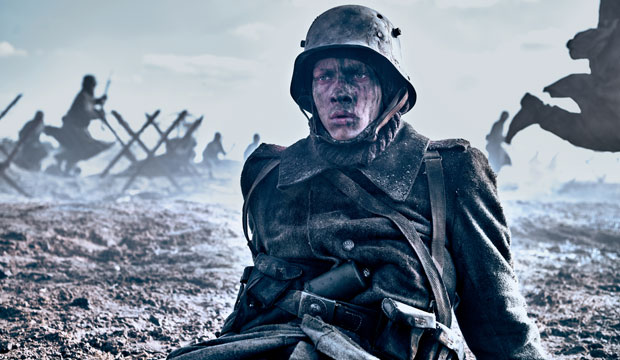 Germany’s anti-war epic “All Quiet on the Western Front” based on Erich Maria Remarque’s 1929 classic World War I novel made a lot of noise at the 95th annual Oscar nominations January 24th. The Netflix production earned nine nominations just two behind the “Everything Everywhere All at Once” and tying with “The Banshees of Inisherin.”

The Oscar nominations for “All Quiet” come a week after the war drama dominated the BAFTA nominations earning 14. Only two other foreign language films have earned more Oscar nominations: both Ang Lee’s exhilarating “Crouching Tiger, Hidden Dragon” from 2000 and 2018’s “Roma” received 10 nominations with “Tiger” winning four Academy Awards while “Roma” picked up three including Best Director for Alfonso Cuaron.

As predicted, “All Quiet” was nominated for Best International Feature, and it has made history by becoming the first German-language movie to be nominated for Best Picture. Its nine nominations topped the six earned 40 years ago by Wolfgang Petersen’s acclaimed World War II submarine suspenser “Das Boot.” Petersen received two of the six nominations for helming and writing.

Though “All Quiet” director Edward Berger failed to get a nomination in the director category, he shares in one for adapted screenplay with Lesley Paterson and Ian Stokell. His film also contends for cinematography, makeup & hairstyling, production design, score, sound and visual effects.

This “All Quiet” would be the second adaptation of Remarque’s novel to win the Best Picture Oscar. Universal’s lavish 1930 production won two Oscars: Best Picture and Best Director for Lewis Milestone and made its young lead, Lew Ayres, a star.

Germany has submitted films since the category’s inception in 1956 as Best Foreign Language Film with a comedy — yes, a comedy — called “The Captain of Kopenick,” which lost to Fellini’s “La Strada.” The first German film to win this Oscar was Volker Schlondorff’s 1979 “The Tin Drum” based on Gunther Grass’ novel. Only two other German films have won: “Nowhere in Africa,” which was released here in 2002 and 2006’s “The Lives of Others.” Before West and East Germany was unified in 1990, one East German production was nominated for foreign film, 1976’s “Jacob the Liar.”