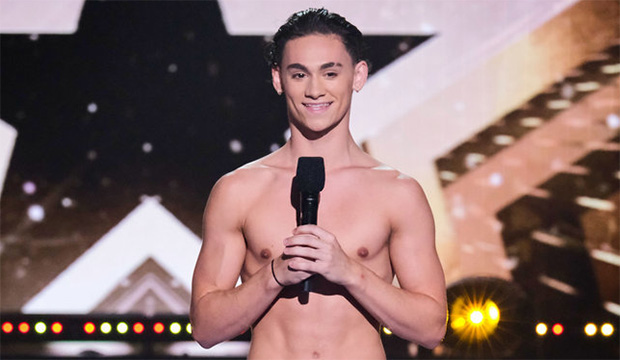 And just like that, Aidan Bryant is headed to his second consecutive “America’s Got Talent” finale. During the January 9 episode of “AGT: All-Stars,” the 18-year-old aerialist earned enough votes from the superfans to advance to the Finals, beating out, among others, magician Dustin Tavella, who previously beat Aidan during the Season 16 finale. The only other “All-Star” act from this week to advance to the Finals was Detroit Youth Choir, who earned Terry Crews‘ Golden Buzzer.

When host Terry Crews announced the results of the superfan vote, it was Aidan that finished at the top of the leaderboard. The Top 3 was rounded out by beatboxer & flautist Divyansh & Manuraj in second place and ballerina Vitoria Bueno in third place. Shockingly, Dustin didn’t hear his name called at all, which meant he placed between fourth and ninth in the superfan vote.

SEE Simon Cowell disses Sethward ahead of ‘America’s Got Talent: All-Stars’ premiere: ‘I don’t like him’ [WATCH]

“I’m nervous that I have to go up against [Dustin] again,” a visibly nervous Aidan admitted before stepping out on the big stage. “I feel like I have to bring a lot more.” And bring it he did, as the talented teen took to the skies in one of the most eye-poppingly beautiful aerial routines “AGT” has ever seen. Even though he briefly slipped on the harness, judges Simon Cowell, Heidi Klum and Howie Mandel jumped up to their feet and gave him a rousing standing ovation.

As for the panelists’ critiques, Heidi raved that it was the “best performance yet” from Aidan. Howie stated he’s “not a fan” of single person aerial acts, but that Aidan’s latest routine was “scarier” and “more dangerous” and “much better” than anything he’d done previously.

Simon recalled how he “watched Aidan’s face” at the end of the Season 16 finale and he’d “never seen anyone look so gutted in [his] life.” He then added, “You’ve come back stronger, better, more confident, a better performer. I mean, that was a 10. That was incredible.” He ended his comments by saying he’d be voting for Aidan if he was a superfan. Well, the superfans clearly agreed, and the rest is history.

“America’s Got Talent: All-Stars” is a spin-off of the popular “AGT” summertime series. Terry Crews is back as host, along with judges Simon Cowell, Heidi Klum and Howie Mandel. At the end of this eight-week competition, one act will earn the title of “Got Talent Superstar” and take home the $25,000 cash prize.