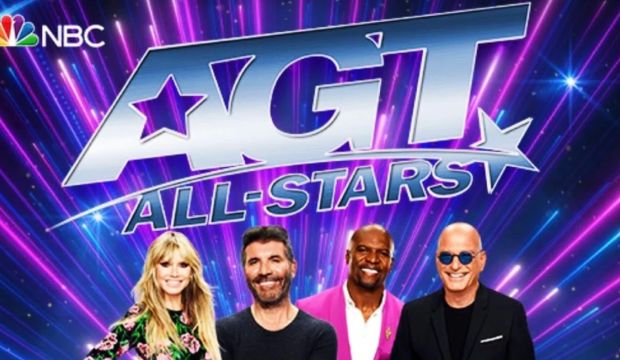 “America’s Got Talent: All-Stars” premiered Monday night with the first 10 acts performing for a coveted spot in The Finals. The new spin-off series features former “Got Talent” contestants from America and across the global franchises in an seven-week showdown to determine which ultimate all-star will claim the title of “Got Talent World Champion.” Longtime series judges Howie Mandel, Simon Cowell and Heidi Klum return to judges’ panel with Terry Crews on stage for hosting duties.

In each of these first rounds, only two of the 10 acts will advance to The Finals. One will be hand-selected by one of the judges via the Golden Buzzer and the other picked by a collection of superfans from across the country.

Follow along with our episode 1 recap live blog of the performances and the judges’ critiques below:

8:03 p.m. – In tonight’s premiere, Howie was given the power of the Golden Buzzer, putting the duty of selecting one act to go to The Finals in his hands. He said it’s a lot of pressure, but it means more than it ever has before.

8:04 p.m. – The first audition of the season came from Bello Sisters, a top 10 finalist from season 15 when performances were presented virtually due to the pandemic. They did not make the finale that year so “All-Stars” marks their first time back on stage live in front of the judges since their very first audition. Tonight the acrobatic trio created towering shapes by contorting and balancing their bodies on one another’s limbs while blazes of fire erupted around their elevated stage. Heidi said that they have the kind of act that the audience doesn’t want to stop, referring to their “beauty and strength and excitement.” Howie called them the “epitome of women supporting women” and Simon called it “as close to perfection” as he’s ever seen.

8:13 p.m. – Next up was seven year old conservation influencer Aneeshwar Kunchala, a top 10 finalist from “Britain’s Got Talent” season 15. Prior to his performance, Aneeshwar won over Heidi and Howie by throwing Simon under the bus for sticking his old chewing gum under the desk on BGT. Concerned with the state of our environment, Aneeshwar’s performance was an instructive heartfelt campaign for the audience to care about the planet as much as he does. Howie called it “adorable” as well as inspirational and important. Heidi said he’s “beautiful inside and out” and that his plea was moving. Simon pointed out that his message travels really well and that it’s all written by him.

8:24 p.m. – Simon’s very first Golden Buzzer act Caly Bevier was next to take the stage. Since finishing as a semi-finalist on season 11, Caly moved to Los Angeles and started working on her own music full time with a band. Tonight she sang “Head Held High,” the first song she ever wrote. Howie said she’s a great writer and singer, comparing her to Halsey, and thinks that the hurdles in her life provided depth to her performance. Heidi appreciated Caly’s style and noticed how comfortable she seems on stage. Simon expressed how impressed he is that she managed to grow so much since the show and come back with this much talent to perform again.

8:35 p.m. – Comedian Lioz was divisive among the judges in his original run so this series is about redemption for him. His “Got Talent” career began with season 13 where he lasted until the Judge Cuts, but then he also appeared on both “Australia’s Got Talent” and “Britain’s Got Talent” after that. Tonight his goal was to “change Heidi’s mind” about him by having her assist him on stage as he spoofed mentalists with a comedic magic act. As Lioz closed out his set, Simon hit his red X buzzer calling it “bad stupid.” Howie disagreed and made a plea to the superfans that Lioz is silly in a funny way. Heidi’s mind was not changed and so she sided with Simon.

8:47 p.m. – The next performer Jeanick Fournier was a fresh face to Heidi who did not see her on her winning run of “Canada’s Got Talent” season 2. Tonight she sang the Lady Gaga soundtrack song “I’ll Never Love Again.” Heidi opened commentary by saying that Jeanick is “meant to be on stage” because of her gift. Simon noted that he saw her on finale night and has respect for her having bigger ambitions than winning and being done. He also said that she showed a lot of control on the song. Howie agreed with Simon, proud of her for not being afraid of potentially losing in this second run on the show.

8:57 p.m. – Finalists from season 14, Light Balance Kids returned to the stage from Ukraine where they not only escaped the devastation of their country but also to show the world that “light always wins.” Their light show tonight took on the theme of arcade games. At the end of the performance the kids explained that because some of their members couldn’t make it, original members of Light Balance volunteered to help them out. Simon called it their best performance “by a mile,” calling it brilliant on top of their story. He said that they define “all-star.” Howie said they’ve always been one of his favorite acts in the history of the show and  with their important message they are even more deserving than ever of receiving his Golden Buzzer! That strike of the button means they advance straight to The Finals for a chance to win.

9:10 p.m. – With over 200 million views, Berywam claimed the most watched AGT audition in history, vaulting them to stardom despite being eliminated in the season 14 quarter-finals. Their return to the show is to prove that they can win in America and are not just a French sensation. Heidi called it “a real treat” because of how incredible it is that they make the sound of so many instruments come out of their bodies. Howie is also a big fan of how they’re rappers, musicians and singers all in one. Simon called them better now than when they were on the show before and it’s exactly why they wanted to do an all-stars season.

9:20 p.m. – Also hoping to prove he can be a champion, aerialist Alan Silva returned with the added goal of showing vulnerability on top of the danger. He first appeared on season 15 and finished in the top 5. Tonight he startled the judges by ending his act on a ribbon trick right in front of their table. Howie called it “a step up” from anything he’s shown them before. Heidi understood Alan when he explained that he’s risking his career by returning, but said his performance was beautiful. Simon said that Alan has gotten better and called it the best aerialist act the show has seen.

9:32 p.m. – The judges were excited to see Jimmie Herrod again after his top 10 finish on season 16. In the original run, Jimmie claimed the ability to change Simon’s mind about the song “Tomorrow,” one Simon said was his least favorite ever before Jimmie sang it. Tonight he sang the Joji song “Glimpse of Us.” Simon said “that’s how you do it,” calling the performance brilliant. Heidi said that his tone is one of her favorites and she thinks he’s fantastic. Howie called him the best male vocalist in the history of the show.

9:43 p.m. – The second champion to return to the stage and the final act of the night was season 2 winner Terry Fator. Simon explained that he’s inspired more contestants than anyone ever, especially in terms of variety acts, and he signed he biggest Vegas contract at the time following the show. Tonight Terry and his turtle puppet Winston sang Andrea Bocelli in Italian. They also surprised with a puppet of Elton John singing “Rocket Man” before Winston joined in with the Dua Lipa version of the song as well. Howie said that it’s “not a fluke” that he won the show or that he’s so big in Vegas, thanking Terry for what he’s accomplished. Heidi said it was an honor to have him there and Simon acknowledged that they wouldn’t have done this season if Terry didn’t compete because they needed him in order to claim that it’s “best of the best.”