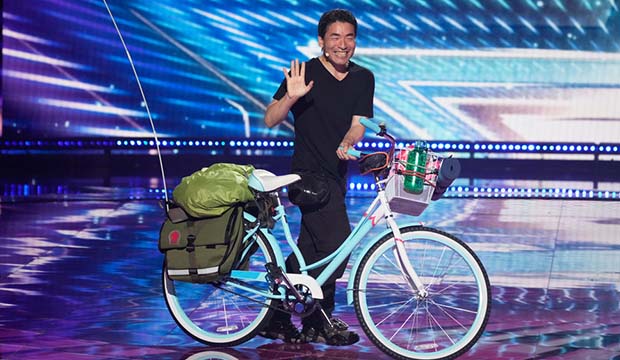 “America’s Got Talent: All-Stars” aired its third episode Monday night with 10 more acts performing for a coveted spot in The Finals. The new spin-off series features former “Got Talent” contestants from America and beyond, competing in a seven-week showdown to determine which ultimate all-star will claim the title of “Got Talent World Champion.” Longtime series judges Howie Mandel, Simon Cowell and Heidi Klum return to the judges’ panel with Terry Crews on stage for hosting duties.

In each of these first rounds, only two acts from each episode will advance to The Finals. One will be hand-selected by one of the judges via the Golden Buzzer and the other is voted through by a collection of superfans from across the country. Last night Mike E. Winfield earned the Golden Buzzer and Avery Dixon was voted through to the next round. These acts join Detroit Youth Choir, Aidan Bryant, the Bello Sisters and Light Balance Kids in the Finals.  Did the fans and judges get it right? Below are my Top 10 rankings for Monday’s third episode of “AGT: All-Stars.”

10. Peter Antoniou: The semi-finalist from Season 16 of “America’s Got Talent” is a fan favorite for many — just not me. His last performance is still one of the worst from a mentalist in recent memory, which is saying a lot. I tend to keep track of mentalist acts from these franchises in recent years. I loved that Howie’s question was about his son and put his son on the spot on national television. Where the act loses a bit of excitement for me is his timing. I mean, c’mon we’re on a time crunch here, it’s a two-hour show. I wholeheartedly agreed with Simon and his red X. Howie disagreed with Simon as did Heidi.

9. Viviana Rossi: Coming off of Season 17 of “America’s Got Talent” and the 10th season of “Romania’s Got Talent,” Viviana was on a mission to win (much to the chagrin of her doctor). After seeing two similar acts in past episodes this season, I could not help but compare her to them. Sure, she was great, but the others were more memorable. The judges and audience loved the performance though, especially Howie. I don’t know about anyone else, but I agreed with the kudos at the time, but by the end of the night, I had forgotten all about her.

8. Mike E. Winfield: Mike may not have won Season 17 of “AGT” but he has become a star in the standup community. With his pink leather jacket, he returned to the stage to the delight of the audience. “Here’s the thing I didn’t win. That’s why I was here.” Loved the attitude! Unfortunately, this specific set of material was not as memorable as his past performances. The judges and audience loved his performance with Heidi calling him a “superstar.” There is a definitive confidence boost in his overall attitude. Simon agreed and gave him the Golden Buzzer. Compared to the other acts in the finals, he might have a tougher road to a win though.

7. Dustin’s Dojo: From Season 9 of “America’s Got Talent,” Dustin’s Dojo returned to do whatever he thinks is karate. The performance was pretty awful. However, it was kind of hilarious that the audience hated it as much as Heidi and Simon. Good? Hell no. Memorable? Yes. I don’t think that he’s a qualified black belt though.

6. Bir Khalsa: In their fourth appearance in franchise history, Bir Khalsa looked to best their performance on “India’s Got Talent” where they placed third. The crowd was thrilled to see this act return to the AGT stage, complete with a manager now. This act scares the living heck out of me in all honesty — they are completely unhinged. Yet, they are thoroughly enjoying themselves the entire time. Do not try this at home kids! Incredible performance, but my heart is not built for acts like this. To quote Simon, “This was one of the rare times where you want your nuts to be hit.”

5. Captain Ruin: This daredevil act from the ninth season of “Australia’s Got Talent” received the best advice from Howie before the act began: “Don’t Die.” Turns out this particular act could end with him suffering the same fate as a “Looney Tunes” character, complete with a piano dropping on his head. Captain Ruin asking for complete silence was a tad bit annoying. His placement this high in my ranking is based on two factors: Amusement and danger without being completely insane. Other than that, nothing to write home about.

4. Dance Town Family: I love this act, which comes as a surprise to nobody since I adore “Dancing With the Stars.” This particular group has flair that is equally as impeccable as their technical abilities. Everything about this performance screamed fun and that is what this show is all about at the end of the day. They mixed salsa cha-cha-cha, and a bit of samba from what I could see, which was even more exciting to me since this was a full blown all-star performance that in any other season would have received a golden buzzer. Heck, if the buzzer was not used already, I think Simon would have given it to them.

3. Keren Montero: The winner of “Dominicana’s Got Talent” in 2021 is arguably one of the best singers to ever step on the AGT stage. She is also a silent assassin, coming across as shy and timid, then unleashing that voice. Once again, I thought, “If she auditioned for the regular season, she would probably win.” The crowd and judges loved her performance, especially Howie. Simon was not sold on the song choice.

2. Avery Dixon: The resident saxophonist from “America’s Got Talent” Season 17, returned for another shot at AGT victory. He seems to have developed even more confidence since then, which showed in his performance. The judges were thrilled to see him, but nobody was more excited than the audience. Kicking off the show with such an inspiring act was a great choice and Avery’s performance set the tone for the rest of the night. In the end, Avery advanced to the finale, where he stands an excellent shot at winning.

1. Keiichi Iwaskai: The opening video of a pleasant bike ride was a wonderful way to introduce viewers to this kind soul. Iwaskai was a finalist recently on “Britain’s Got Talent” but also has appeared on multiple versions of the “Got Talent” franchise. His performance was a lot of things. Hectic yet insane. Amazing yet hilarious. I was not expecting Keiichi to be this fun to watch but now that I know of his existence, he has a fan for life. I say this every week but if there is a wild card spot of any kind in this season, Dustin Tavella and Terry Fator could have some serious competition.