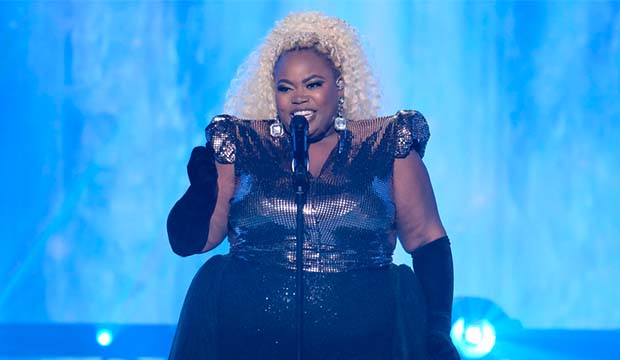 “America’s Got Talent: All-Stars” aired its fourth episode Monday night with 10 more acts performing for a coveted spot in The Finals. The new spin-off series features former “Got Talent” contestants from America and beyond, competing in a seven-week showdown to determine which ultimate all-star will claim the title of “Got Talent World Champion.” Longtime series judges Howie Mandel, Simon Cowell and Heidi Klum return to the judges’ panel with Terry Crews on stage for hosting duties.

In each of these first rounds, only two acts from each episode will advance to The Finals. One will be hand-selected by one of the judges via the Golden Buzzer and the other is voted through by a collection of superfans from across the country. Last night Aidan McCann earned the Golden Buzzer and Power Duo was voted through to the next round. These acts join Mike E. Winfield, Avery Dixon, Detroit Youth Choir, Aidan Bryant, the Bello Sisters and Light Balance Kids in the Finals.  Did the fans and judges get it right? Below are my Top 10 rankings for Monday’s fourth episode of “AGT: All-Stars.”

10. Darius Mabda: The winner of “Romania’s Got Talent” is an interesting case for me. Darius has personality to spare and the talent to back it up. Saying that, I was not that impressed by this performance. His nerves were very much apparent from the start. The performance was solid, but boring outside of a couple flips. If I am brutally honest, I am not sure if he would make it too far on “So You Think You Can Dance,” but give him a few years to calm those nerves and I would love to see him there since that show seems tailor made for him. Baryshnikov? I’d say more on par with Ricky Ubeda.

9. Human Fountains: In season 13 of “America’s Got Talent,” the Human Fountains became quarter-finalists, for reasons that are beyond me. Fans either loved them or were completely disgusted. Count me in the latter. This act is a super-spreader nightmare. Also, a casual reminder that Tyra Banks even got in on the act, which I would imagine is something she might want to forget about. This performance was, in lack of a better term, unnecessary. The hotdog was just gross on an entirely different level. I agreed with Simon on this one as did most of social media. So why are they not ranked last you may ask? Well, they were at least memorable.

8. Power Duo: Power Duo may have won “Philippine’s Got Talent” in 2016, but I will forever associate them with their run on “Asia’s Got Talent,” which was beyond incredible. For anyone who has not googled their performances on that show, it is definitely worth it. Saying that, they were not as memorable tonight for me. In terms of personality, they are unbeatable. This duo’s superpower truly is that of extreme likability. As adorable as the performance was, I must compare them to the other aerialist acts of this season. It doesn’t quite measure up to Aidan Bryant or Alan Silva. The super fans voted them through to the final though, so it will be interesting to see how they fare against Aidan.

7. Ndlovu Youth Choir: I would love to know who decided to put two choirs in a row so closely together in an episode, since I found it to be a poor choice. This finalists from the 14th season of “America’s Got Talent” is forever one of my favorites, but it pains me to say that this particular performance was not exactly memorable for me. An original song was not the best choice as most original songs tend to be pretty forgettable, which is something I have learned from this show and “American Idol.” Performance was an A+ but the song unfortunately was not on the same level.

6. Mini Droids: The winners of “Belgium’s Got Talent’s” seventh season is quite honestly one of the most interesting acts of the season to me. Their routine to a Backstreet Boys hit that season went viral. This notoriety might have made them immediately recognizable to some in the audience as they received a great reception for just walking onto the stage. These dancers may just be kids but they can definitely bust a move. The audience seemed especially impressed by them. This particular performance was a lot of fun to watch, but even I could tell that they were not finals-bound.

5. Aidan McCann: Magicians have had a bit of a rough go of it this season, but this finalist of the 14th season of “Britain’s Got Talent” was more than up for the task. He has met celebrities, performed in Vegas, and has appeared on talk shows, but matching with Terry Crews is the biggest street cred he will ever get style-wise. The young Harry Potter lookalike even took a jab at Howie and Simon, which earned him bonus points in my eyes. The trick was pretty cool and definitely something that I can see adult magicians borrowing. The judges loved it as did the audience and social media. Heidi gave him a well-deserved Golden Buzzer, which was completely unexpected.

4. Robert Finley: Did you hear that? That was the sound of me screaming in excitement that Robert Finley has returned to the AGT stage. Let’s be honest here, the 14th season of “America’s Got Talent” was stacked with talent but Robert only made it to the quarterfinals that year. I’m still bitter about that. Luckily, he returned to grace the AGT stage once more after a highly successful career was born. The song was great and his performance electrified the stage. Everyone loved it, especially social media. Saying that, Robert was not finals-bound.

3. Sacred Riana: Sacred Riana is one of those acts that simultaneously makes me happy yet makes me want to have a squirt gun of holy water handy, which is a compliment since this illusionist won the second season of “Asia’s Got Talent” and took her act all over the world, notably “America’s Got Talent,” where she scared Scary Spice, Mel B., herself. There is just something about this performance that was especially captivating to me since she reminds me of the M3GAN doll (except nonverbal for the most part and without the dancing).

2. Emil & Dariel: In the ninth season of “America’s Got Talent,” this cello duo was not my favorite act but made it all the way to the finale. In 2023, that changed as they became one of my favorites of this spin-off series. There was just something about this performance that struck a chord with me that I cannot quite explain. By the end of the performance, I truly thought that they were bound for the finals, where I would be rooting hard for them to get the win. The physical transformation threw me off at first since now they are full-fledged adults that have mastered their craft. Howie naturally played party pooper once more as did Simon, who called them boring. Heidi tried helping them and honestly, I love that they are just two regular guys that are beyond talented. There is an audience for this act at the end of the day and if that is not Simon nor Howie, well that’s fine.

1. Cristina Rae: The third place finalist of the 15th season of “America’s Got Talent” was largely favored to win her season by many. Some people still use her as a benchmark for singing excellence on this series, and deservedly so. The crowd and judges were thrilled to see her return to the stage that made her a star. Bonus points for THAT outfit, which screamed “Superstar.” The song choice of “Hold My Hand” complimented her voice perfectly and was also very timely on the eve of Lady Gaga’s Oscar nomination. Cristina returned even better than before and blew the minds of the studio audience and viewers at home. Can we get a full concert from her NBC?