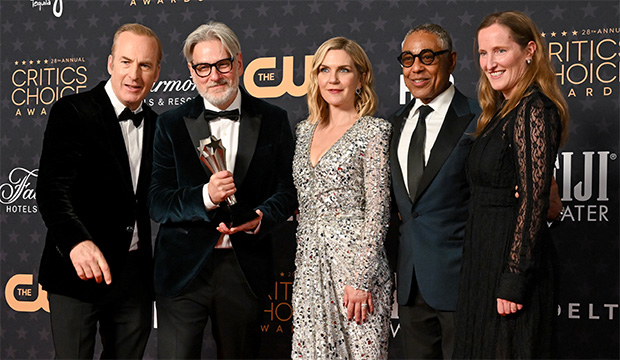 In all, “Better Call Saul’s” three trophies made it the biggest TV champion of the year. Previously at the Critics Choice Awards, the AMC show that served a spin-off/prequel/continuation of “Breaking Bad” took home two leading awards for Odenkirk (2015 and 2016) and one supporting trophy for Jonathan Banks (2015).

“Thank you so much, critics,” Gould declared at the podium. “You indulged this very unlikely spin-off. Lightning struck twice because of you guys and because of our brilliant, brilliant audience. I have to say, there should be about 200 other people standing here with us because the truth is that what we do is collaboration — it’s play, it’s fun. And as we say, teamwork makes the dream work. We have the best, the kindest, most generous cast, crew, writers, directors, producers anywhere. We finished a while ago and I miss every single one of you more than I can say. I have to thank our friends and allies at Sony and AMC because they stuck with us through thick and thin, and there was some real thin there.”

Gould concluded by saying, “My God, it’s been 15 years of this? It’s crazy! Nobody gets to do this for 15 years straight. So thank you so much for that. I am sick with pleasure!” For those keeping track at home, “Better Call Saul” is now the first spin-off to win a series prize at the Critics Choice Awards. Its parent show “Breaking Bad” claimed the top Best Drama Series trophy twice in 2013 and 2014. Franchise creator Vince Gilligan was not there to celebrate the big victory, though Gould gave him a shout-out at the podium.

Other big TV winners at the Critics Choice Awards included comedy series “Abbott Elementary” and limited series “The Dropout.” Both programs claimed their series trophies as well as one individual acting statuette: Sheryl Lee Ralph for “Abbott” and Amanda Seyfried for “Dropout.” The only category that “Better Call Saul” lost was Best Drama Supporting Actress, as Seehorn and Carol Burnett both came in behind victor Jennifer Coolidge (“The White Lotus: Sicily”).

Over the past several years, “BCS” has acquired an unfortunate reputation at awards shows for being “always the bridesmaid, never the bride.” Indeed, it has lost an astounding 46 Emmy Awards, as well as six Golden Globes and six Screen Actors Guild Awards. Now, with its three wins at the Critics Choice Awards, is the tide starting to turn for AMC’s legal series when it matters most, for its final season? We’ll find out soon, as the SAG Awards are up next: it’s nominated there for three trophies for ensemble cast, Odenkirk and Banks.