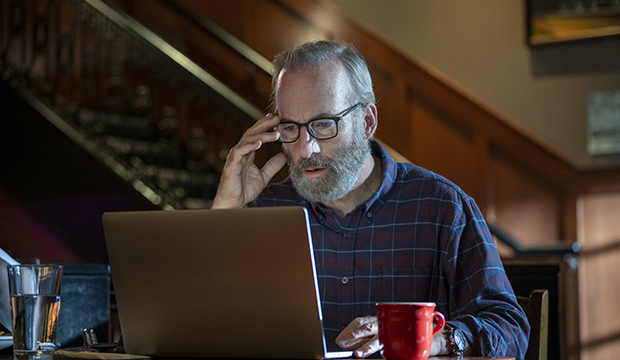 Bob Odenkirk’s return to AMC has a date: His new series “Lucky Hank” (formerly “Straight Man”) will premiere on Sunday, March 19 on AMC and AMC+, the network announced Tuesday at the Television Critics Association winter press tour. No time was specified.

“Lucky Hank” will launch just seven months after Odenkirk finished his 13-year stint playing Saul Goodman/Jimmy McGill/Gene Takovic across two shows with the conclusion of “Better Call Saul” last August. He was sent the “Lucky Hank” script while shooting the final season of “Saul” and was taken by the comedic tone of “Hank,” given his career roots.

“Especially in connection with the work that I’d been doing on ‘Saul,'” Odenkirk said during Tuesday’s panel for the series. “As crabby as he is, he loves his wife. Saul was really alone. He wanted Kim (Rhea Seehorn) to love him, but they were never going to be fully embracing each other. I liked that this guy loved his wife, she loved him. … I like the humor of him, he’s funny, he knows he’s being funny, which is where the original title came from.

SEE Can Bob Odenkirk pull a Bryan Cranston at the Golden Globes?

“He is a lucky guy, as it turns out. He may think he’s unlucky, but the more you watch it, the more you think, ‘Wow, you got lucky, man.’ So I like the positive sides to it,” he continued. “Saul was very funny at times, but he wasn’t aware of how funny he was. He wasn’t part of the joke. Hank gets to be the wisecracker. He gets to laugh at his situation while he’s part of it too. … I think I loved the ways it was different from ‘Saul’ and the way I could do comedy.”

After “Saul” ended, one might think Odenkirk would want to take a lengthy break. The actor also suffered a heart attack while filming the final season in July 2021, the recovery from which Odenkirk says he’s “still in the middle of.” The “Lucky Hank” deal “happened so quickly.” “It was a long enough time for me to grow a beard. I grow a pretty great beard, I gotta say,” he quipped. “I don’t think you can sit around hoping you can be perfect again. You can’t. I got so lucky with ‘Saul.’ … All you an do is read another project and risk and hold hands and jump off the cliff together. Think of what a risk ‘Saul’ was. There was no guarantee it’d work.”

The Emmy winner is still “trying to get the work-life balance” in the wake of his health scare. “I don’t think I’ve figured it out,” he said. “I have to figure it out. I wanna make the right choices so I can feel like I can do the best I can with the time I have left with the things that I love in this world.”

“Lucky Hank’s” spring premiere means Odenkirk will have two shows in the running at Emmys this year. The final six episodes of “Better Call Saul,” which has never won an Emmy despite 46 nominations, are eligible one last time. It’s unclear where “Lucky Hank,” which will have eight episodes this season, will be submitted, but it’ll likely be comedy.