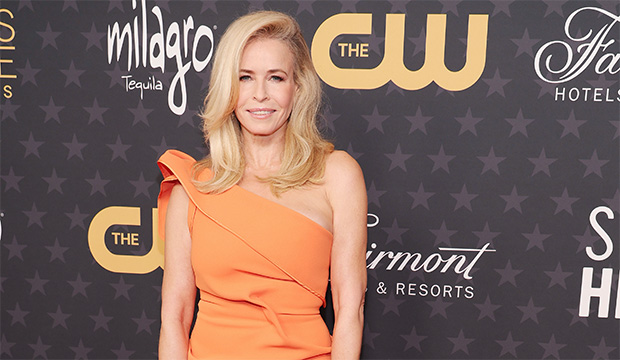 The 28th Annual Critics Choice Awards on Sunday had a little bit of everything (and a lot of “Everything Everywhere All at Once”) and, as such, it was everything the Golden Globe Awards the previous Tuesday was not. It had winners who were super-excited to win (see: Brendan Fraser, Bob Odenkirk, Sheryl Lee Ralph, Niecy Nash Betts), entertaining presenters, and a host (Chelsea Handler) who knows how to play to the audience. It felt like a party and was thus a kick to watch on The CW.

There are of course a few caveats, namely that the winners had to make giant hikes up to the stage to claim their trophies, seemingly sponsored by Fitbit. Couldn’t they figure out a way to seat nominees closer than San Pedro? And a dozen or so winners in what was deemed the “lesser” (read: non-acting) categories didn’t receive their statues on camera, relegated to announcer voiceovers leading into and out of commercial breaks. It seemed a small step removed from launching the hardware into the audience by catapult and dispensing with the stage part altogether.

Moreover, forcing several of the TV acting victors to accept their wins in tandem making back-to-back acceptances is an idea whose time will never come. Even presenter Quinta Brunson – a winner in comedy series for “Abbott Elementary” – was moved to observe, “Not my choice.”

Lastly, Handler disappeared for big chunks of time and really only briefly reappeared on a handful of occasions to introduce presenters following her opening monologue. There were also several announced nominee no-shows due to COVID, including Jamie Lee Curtis, Michelle Pfeiffer, Colin Farrell and Brendan Gleeson.

But that’s essentially it for the major negatives.

SEE 2023 Critics Choice Awards winners list: ‘Everything Everywhere All At Once’ leads the way with 5 wins

That monologue from Handler was terrific, smart, biting and timely but never crossed the line to mean-spirited. A few of her greatest hits:

It was an old-fashioned, take-no-prisoners awards show opening, and it set the tone for an evening of great fun, even if Handler herself wasn’t such a big part of it after that first 10 minutes. Hey, they had a zillion awards to get to, and not nearly enough time. They couldn’t even manage to allow the Best Young Actor/Actress victor Gabriel LaBelle of “The Fabelmans” to actually accept his award onstage. But the ones that were permitted to talk mostly didn’t waste the opportunity.

Jennifer Coolidge, in the latest stop on her awards show tour of wins for “The White Lotus: Sicily,” was positively restrained on Sunday compared to her previous long-running epic acceptance speeches and ended with what could be a battle cry for humanity itself: “It’s not over till you’re dead.” And she is decidedly very much alive.

An emotional Niecy Nash Betts ended her acceptance for supporting actress in a limited series or made-for-TV movie by thrusting her hardware skyward and announcing, “In your face!” to the doubters. And in her win for supporting actress in a comedy, Sheryl Lee Ralph of “Abbott Elementary” – who had already delivered a memorable acceptance at Emmys last September – was possibly even more intense and grateful this time. She began, “Every mistake. Every bad break. Every ‘no.’ Every rejection. In an industry that when I was 19 years old, was quick to tell me there was no place for me. But Sidney Poitier looked at me and said, ‘You’re a damn good actress.’ She concluded, “To all of you watching here, come close to the screen and listen. (Pause) People don’t have to like you. People don’t have to love you. They don’t even have to respect you. But when you look in the mirror, you better love what you see.”

Then up came fellow winner Henry Winkler. After waiting patiently beside Ralph, he said, “I was so sure I wasn’t gonna win that I didn’t have this shirt cleaned after the Golden Globes. I just hung it up.” Despite having the toughest of acts to follow, he more than held his own.

A pair of special awards on Sunday also proved ceremony highlights. The first went to “Glass Onion” star Janelle Monáe, the first nonbinary person to win the SeeHer Award that recognizes people who advocate for gender equality, defy stereotypes and portray characters with authenticity and push boundaries in the industry. “If you know my story, you know I wasn’t supposed to make it out of Kansas City, Missouri and be here tonight. I wasn’t. I didn’t see the vision clearly for myself. I couldn’t see my gift. I couldn’t see what my purpose was supposed to be at that time. But thank you, God, so many other people did. They didn’t give up on me and they gave me opportunity despite my own lack of confidence. So anyone out there like me watching right now, I just want you to know that I’ve seen you, but I challenge you to see you.”

Also heartfelt and adorably freewheeling was Jeff Bridges, honored with the Lifetime Achievement Award. He paid tribute to his father Lloyd Bridges, to the late filmmakers Peter Bogdanovich and Bob Rafelson, and – charmingly – even to his longtime personal stand-in. “Telling stories, that’s the privilege,” he said. “That we get to do it as actors. We get to see some wonderful lines…we can make something beautiful.”

A presenter that drew laughs, some of them nervous, was Seth Rogen, who came on and essentially went into rant mode to trash the broadcasting network The CW for the lame time-saving practice of giving out two awards at once. “Are we crunched for time?” he asked. “Get another hour! This show airs at 4 p.m. on The CW. That cannot be expensive. I’m not saying The CW is bad, (but) it’s the one network to receive zero Critics Choice nominations.”

But the most electric, moving moment of the ceremony had to be Brendan Fraser’s win as Best Actor for “The Whale,” the culmination of an inspiring comeback story for the performer. He was sobbing from the moment his name was read and began by thanking the critics for “waking up for me. He noted through tears that his movie is “about love, it’s about redemption. It’s about finding the light in a dark place, and I’m so lucky to have worked with an ensemble that is incredible.”

SEEOscar spotlight: Brendan Fraser should still be the man to beat for Best Actor

Fraser went on, “(Director) Darren Aronofsky, I was in the wilderness, and I probably should have left a trail of breadcrumbs, but you found me. And like all the best directors, you merely just showed me where to go to get to where I needed to be.” The actor’s gratitude led to even greater difficulty speaking as his acceptance went on, such an emotional place was he in. He added, “If you, like a guy like (his character) Charlie, who I played in this movie, in any way, struggle with obesity, or you just feel like you’re in a dark sea, I want you to know that if you too can have the strength to just get to your feet and go to the light, good things will happen.” He received a standing ovation after leaving the stage.

A decidedly different vibe emerged from Liz Meriwether following her win near the conclusion as creator of the limited series winner “The Dropout.” Besides thanking “White Lotus” creator Mike White for not being nominated in the category, she said, “Thank you to my ridiculously hot parents. They’re looking for a third. Talk to me after.”

It was proof that the Golden Globes hardly have a monopoly on all the good lines. And it put a tight bow on a show with its heart very much in the right place.