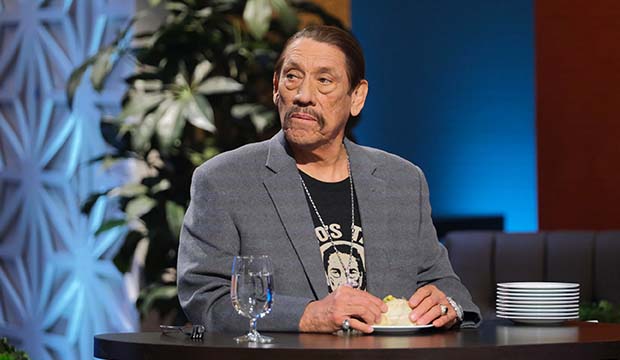 Tonight, the final nine chefs are put to the test, creating elevated tacos with various proteins. Actor turned restauranteur Danny Trejo joins Gordon Ramsay to judge each of the tacos. Who will make the ultimate taco and impress the taco connoisseur in the all-new “Everyone’s Taco’ing About It” episode of “Hell’s Kitchen” airing Thursday, January 5 (8:00-9:01 PM ET/PT) on FOX?

Below, read our minute-by-minute “Hell’s Kitchen: Battle of the Ages” recap of Season 21, Episode 10, titled “Everyone’s Taco’ing About It” to find out what happened Thursday, January 5 at 8:00 p.m. ET/PT. Then be sure to sound off in the comments section about your favorite aspiring chefs on Fox’s reality TV show and who you think has what it takes to join the “HK” winners list. See which contestants are still competing below.

8:00 p.m. — “Previously on ‘Hell’s Kitchen’!” In Episode 9, Brett was sent over to join the ladies on the Red Team. Next, contestants competed one-on-one in an ingredient game show. Following dinner service, Gordon chopped Vlad Briantsev, stating, “It’s called cake tester for a reason. It tests cakes, not steaks. Vlad, that was bad!”

8:05 p.m. — Tara is relieved that Gordon appears to believe in her even if her team doesn’t. Up in the dorm, the Red Team says they have never given up on Tara they just think she’s a poor communicator. The next morning Abe’s high energy seems to be driving everyone a little nuts, particularly Sommer.

8:10 p.m. — Gordon calls everyone to the kitchen for their next challenge. When they arrive he explains they’ll be taking comfort foods and elevating to restaurant quality. He then reveals Danny Trejo’s screaming head hidden underneath a silver platter. Terrifying! Trejo will be there to guest judge this challenge where each chef will elevate tacos. The actor has a successful chain of restaurants called Trejo’s Tacos. They exist in Los Angeles, Miami and Chicago. He says the key is to come up with something unique and cater to everyone — whether they’re vegan, gluten free or whatever else! In this challenge each team will be responsible for making five tacos (each with a different protein). Since the Blue Team has just four members, their fifth taco will be a team taco. They have 40 minutes…starting now!

8:25 p.m. — Time is up and now chefs from the Red Team will go head-to-head against chefs from the Blue Team with Trejo picking the winner. He declares a tie between Sommer and Alex for their chicken tacos. Sakari’s shrimp taco defeats Tara’s. Abe’s fish taco defeats Brett’s. Cheyenne’s steak taco defeats the Blue Team’s beef taco. Dafne’s chicken taco defeated Alejandro’s. Because the score is tied 3-3, it comes down to a tie-breaker between the best taco’s from each team: Dafne’s for the Red Team and Abe’s for the Blue Team. Trejo gives the edge to Dafne, saying it tastes just like his mom’s cooking. The Red Team has won this challenge! They’re off for an afternoon of food and fun while the Blue Team stays back, chucking corn and hand-rolling tortillas.

8:40 p.m. — Hell’s Kitchen has opened for dinner service. Special guests include actresses and comedians Cheryl Hines and Rachel Harris in the Blue dining room. In the Red kitchen, Tara seems to be overcompensating after being told she doesn’t communicate well. She’s screaming over everyone and getting on Gordon’s nerves. Meanwhile, Brett is being dragged along by Sommer. She basically has to hold his hand through everything. Over on the Blue Team Alejandro is working on his voice after receiving a pep talk from Gordon. Both teams push through appetizers and the Red Team is ready for their first entree.

8:50 p.m. — In an attempt to put out a small fire, Cheyenne suffers a burn. She’s rushed off to the medic and begins to cry — probably more from anger than pain. She’s disappointed this could potentially send her home. Back in the kitchen, Dafne takes over the meat station to great success and the entrees continue to go out as scheduled. Over on the Blue Team things aren’t going as smoothly. Abe didn’t hear anyone call out a salmon order and falls behind. They recover nicely. When each team has just three tickets left, Gordon says whoever finishes first will win dinner service. It goes down to the wire, but the Red Team wins!

9:01 p.m. — The Blue Team has nominated Sakari and Abe. They both plead their case to stay and then Gordon shocks everyone by calling Brett down from the Red Team instead. He says Brett had a rough service and was bailed out by the women, so he must turn in his jacket. Just when it looks like Brett is being sent home, Gordon sends him back to the Blue Team instead. Next, Gordon eliminates Abe from the competition, stating, “Abe’s performance tonight was more like a C-. With only the best chefs left in the competition, his grades just don’t make the cut.”