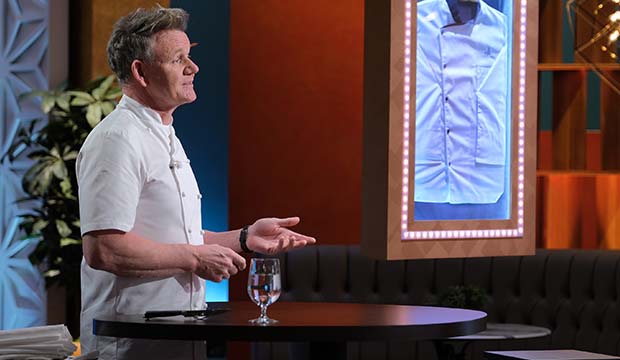 “Hell’s Kitchen” is in its 21st season. For the first time ever, the well-seasoned 40-somethings take on the fresh up-and-coming 20-somethings in a battle of the ages. 18 all-new chef-testants entered the kitchen, with Christina Wilson and Jason “Jay” Santos returning as sous-chefs for the Red Team and Blue Team, respectively. At stake for the winner? A $250,000 cash prize and the head chef position at Gordon’s brand new Hell’s Kitchen Caesar’s Atlantic City. Who will take the title?

Below, read our minute-by-minute “Hell’s Kitchen: Battle of the Ages” recap of Season 21, Episode 12, titled “What in Hell’s Kitchen?” to find out what happened Thursday, January 19 at 8:00 p.m. ET/PT. Then be sure to sound off in the comments section about your favorite aspiring chefs on Fox’s reality TV show and who you think has what it takes to join the “HK” winners list. See which contestants are still competing below.

8:00 p.m. — “Previously on ‘Hell’s Kitchen’!” In Episode 11, Gordon put the chefs to the ultimate test of their individual palates in the 21st annual blind taste test challenge. Then, Eric McCormack (“Will & Grace”) and Justin Turner (professional baseball player) attended the dinner service for their respective charities. Following dinner service, Gordon chopped Brett Binninger-Schwartz, stating, “Attention to detail is vital in a fine dining kitchen. When Brett couldn’t even count 12 plates correctly, I knew I couldn’t count on him.”

8:08 p.m. — Dafne is feeling the pressure after being nominated for elimination last week. She breaks down, admitting she’d love to hear from her family to give her an extra push towards the finish line. The next morning the chefs gather outside to set up a welcome banner for some special guests. People begin skydiving down to the lot outside as Gordon introduces them as the HK Flyers. Next, he announces, “It’s time for black jackets!” Back in the kitchen, Gordon reveals there will be just five black jackets handed out. For round one, contestants are told to make a “stunning dish” honoring an important mentor or loved one in their lives. They have 45 minutes.

8:15 p.m. — Sommer’s dish dedicated to her mother has “rustic charm” and “packs a punch.” Alex dedicates his scallops to his wife. Gordon loves the spice, but warns him about adding too much butter to the risotto. Cheyenne made fettuccini inspired by her dad, which Gordon calls “slightly overcooked.” Alejandro’s stew for his wife looks delightful and Gordon calls his broth “the winner” of the dish. Tara’s lobster and gnocchi is “tasty” but it needs a sauce to bring it together. Dafne serves up stuffed chicken for her mentor and Gordon calls it “beautiful” with “amazing” seasoning. Sakari is last, serving a lobster dish dedicated to his mother. The puree is “exceptional” but the lobster is 30 seconds undercooked. Gordon compliments everyone’s dish and says, “It confirms I have the right seven.” The first chef to receive a black jacket is Sommer! Gordon congratulates her and calls the dish “exceptional.” Next, he decides to hand out a second black jacket to Dafne!

8:40 p.m. — Sommer and Dafne leave while the remaining five duke it out for the last three black jackets. For the next challenge, Gordon tests each chef’s creativity. They’ll have a chance to put their spin on one of Gordon’s signature dishes. Another 45 minutes later, it’s judgement time. Tara goes first with a Steak Diane. Gordon loves the elevation and calls it a “good start.” Next, Alex presents an heirloom carrot puree with a raw fennel grapefruit salad. Gordon wishes it had more seasoning, but the puree is “exceptional.” Cheyenne’s scallops dish needs some “editing” but the protein is good. Alejandro’s lobster ravioli “looks beautiful” and the egg yolk is “bursting with flavor.” Gordon instantly hands Alejandro a black jacket and says, “That’s exactly what I was looking for.” Sakari nailed his salmon dish, but there’s too much sauce. Gordon hands out the fourth black jacket to Alex!

8:55 p.m. — Just one black jacket remains with three chefs vying for it: Cheyenne, Sakari and Tara. For the final challenge, each chef will receive one of the most difficult proteins to perfect — a pork chop. After everything is plated, Gordon sends all three contestants up to his office. Next, Gordon calls Sommer to the dining room. He instructs her to taste all three dishes and tell him what she likes best, without knowing who cooked what. She chooses Sakari’s. Next, everyone else with black jackets does the same thing. Dafne chooses Cheyenne’s. Alejandro’s choice is hidden. Alex chooses Tara’s. It all comes down to Alejandro’s mystery choice!

9:01 p.m. — The first chef eliminated is Sakari. The finale recipient of the black jacket is Cheyenne, meaning Tara has been eliminated. The top five are officially Alejandro, Alex, Cheyenne, Dafne and Sommer. In this “Battle of the Ages” the 20-somethings go into the final stretch with a 4-1 advantage.