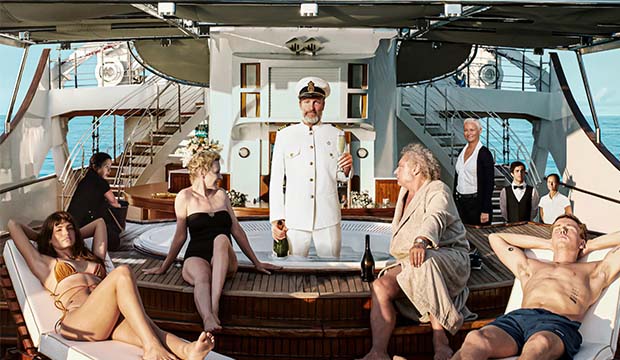 In the film, Harrelson stars as a drunk, inept captain of the super yacht who does nothing but makes matters worse when the ship hits extremely choppy waters. The wealthy guests (including supermodels played by Dickinson and Dean) and the crew alike must survive on their own. Here’s how to watch “Triangle of Sadness” online.

How to watch “Triangle of Sadness” online

Is “Triangle of Sadness” still in theaters?

Yes. “Triangle of Sadness” first premiered at Cannes Film Festival in May 2022. The film was released in theaters in the U.S. on October 7, 2022. It is available to watch in select theaters such as Regal (check local listings) in anticipation of the Oscars.

Is “Triangle of Sadness” streaming?

Currently, Triangle of Sadness is not streaming for free on any platform. Neon owns the North American distribution rights. While a 4K UHD, Blu-ray, and DVD disc is set to be released by The Criterion Collection in April 2023, there is no announced plan for digital streaming. In the past, many Neon titles have streamed on Hulu.

Will “Triangle of Sadness” win an Oscar?

The satirical film has already received a number of accolades. After winning the Palme d’Or at the Cannes Film Festival, “Triangle of Sadness” won Best Film at the European Film Awards and received nominations for both a Golden Globe and a Critics’ Choice Award. At the 2023 Oscars, “Triangle of Sadness” will compete for three awards, including Best Picture, Best Director, and Best Original Screenplay.