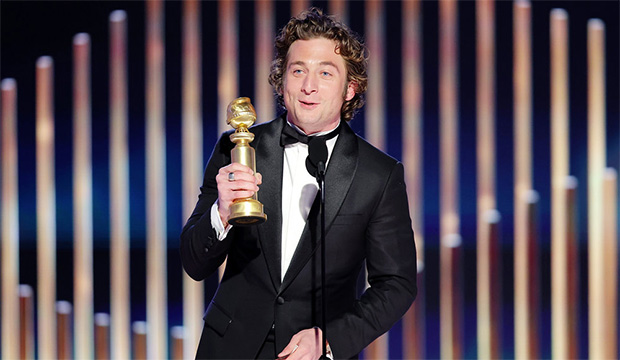 After being a featured player on “Shameless” for over a decade, Jeremy Allen White is now the lead on his very first TV show … and he won a Golden Globe for his efforts. White prevailed during Tuesday’s ceremony for his role of Carmen “Carmy” Berzatto on FX on Hulu’s freshman dramedy series “The Bear.” He beat out co-nominees Donald Glover (“Atlanta”), Bill Hader (“Barry”), Steve Martin (“Only Murders in the Building”) and Martin Short (“Only Murders in the Building”). See the complete winners list.

“I love acting!” White proclaimed at the podium after thanking his fellow “The Bear” cast members and those who helped him get to where he is. At Gold Derby, White was the overwhelming favorite to claim the trophy for Best Comedy Actor, with 13 out of 15 Globe Experts predicting him to win. That translated in leading 16/5 racetrack odds.

On “The Bear,” Jeremy Allen White plays Carmy, a young chef who returns home to Chicago to work at his family’s Italian sandwich shop following the shocking suicide of his brother. The critically acclaimed laffer streamed on FX on Hulu earlier this summer and had fans around the country shouting, “Yes, Chef!” to White’s awards chances.

Second place in our odds was Steve Martin (“Only Murders in the Building”). Season 2 of Hulu’s whodunnit mystery comedy welcomes back Martin as Charles-Haden Savage alongside his co-leads Martin Short as Oliver Putnam and Selena Gomez as Mabel Mora. As the trio tries to solve a brand new murder within the walls of their ritzy apartment complex, it soon becomes all too personal for Charles, who starts to wonder about his late father’s various secrets.

Third place in our odds was Bill Hader (“Barry”). Hader is a two-time Emmy winner for starring as Barry Berkman in HBO’s hitman-turned-actor comedy, but he has yet to take home a Golden Globe. The show went to even darker depths in Season 3, as Barry’s true identity was found out by his acting coach, Gene Cousineau (supporting actor nominee Henry Winkler), and his relationship became strained with his girlfriend, Sally Reed (Sarah Goldberg).

SEE How did Jerrod Carmichael do as 2023 Golden Globes host? [POLL]

Fourth place in our odds was Martin Short (“Only Murders in the Building”). Short’s storyline in “Only Murders” Season 2 takes a dramatic turn as Oliver Putnam begins to question whether he’s actually the father of his son, Will Putnam (Ryan Broussard). But it’s the death of Bunny Folger (Jayne Houdyshell) that dominates the proceedings this year, with Oliver re-teaming with his podcast buddies Charles and Mable to try to crack the case, no matter the cost.

Fifth place in our odds was Donald Glover (“Atlanta”). Globe voters have two seasons’ worth of material to consider, as Season 3 aired from March to May and Season 4 aired from September to November. The actor is recognized for his role as Earnest “Earn” Marks, a college dropout who now manages his cousin Alfred “Paper Boi” Miles’s (Brian Tyree Henry) rap career. Glover won this category in 2017, and this marks his third overall bid for the FX dramedy.