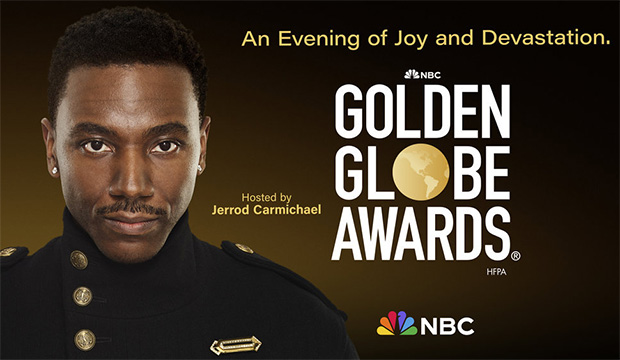 The last time the Golden Globes graced our television screens was February 28, 2021, when Tina Fey and Amy Poehler hosted a bi-coastal ceremony because people were still afraid to travel amidst the Covid-19 outbreak. The 2022 kudos weren’t televised due to controversies regarding diversity and ethical voting habits within the Hollywood Foreign Press Association. Flash-forward to January 10, 2023, and Jerrod Carmichael served as the ringleader of NBC’s comeback gala in which 14 film trophies and 13 TV statuettes were doled out from the Beverly Hilton Hotel in Beverly Hills, CA.

While this was the comedian’s first time emceeing the Golden Globes, he is no stranger to awards shows, as he recently won the Emmy for writing the variety special “Jerrod Carmichael: Rothaniel,” and he earned a Best Comedy Guest Actor bid for hosting “Saturday Night Live.” So how did Jerrod Carmichael do as the 2023 Golden Globes host? Vote in our poll below.

SEEGolden Globes winners list in all 27 film and TV categories

With so much in-house drama to pull from, Carmichael had no shortage of jokes for his opening monologue. He came out on stage wearing all black with a white collar and instructing the crowd to “let’s be a little quiet here.” He then stated unequivocally, “I’m here ’cause I’m Black,” referencing the diversity controversies from recent years.

“I won’t say they were a racist organization, but they didn’t have a single Black member till George Floyd died. So do with that information what you will,” he joked. Carmichael then sat down on the edge of the stage looking somewhat forlorn as he told the story of how he was asked to emcee the ceremony. “One minute you’re making mint tea at home, the next you’re invited to be the Black face of an embattled white organization. Life really comes at you fast, you know?”

Carmichael revealed he is being paid $500,000 to host the show, and it was his friend Avery who convinced him to take the gig … for the money. As it turns out, he declined having a one-on-one sit-down with Helen Hoehne, the President of the HFPA, and said he was “unfireable” because of his status as the first Black host. “I heard they got six new Black members — congrats to them,” he applauded on stage.