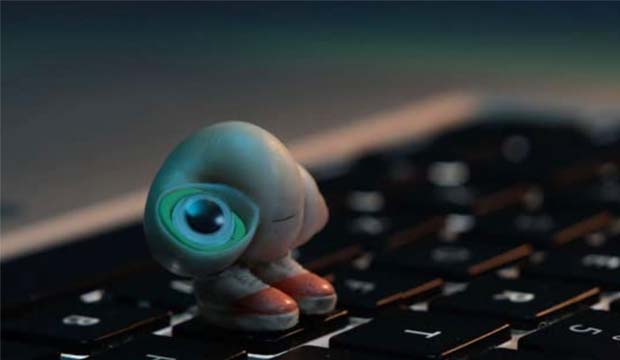 Meet your new role model, a soft-spoken but assertive, empathetic yet caustically witty one-eyed shell that’s an inch tall and named Marcel. You can bet your bottom craisin that no other movie you saw this year had a character with bigger heart. He’s also a reservoir of stoic wisdom and DIY home hacks! Here are five rules for a meaningful life we learned from the star of “Marcel the Shell with Shoes On.” As we celebrate the new year, perhaps we can all try to incorporate more of these values in 2023.

As adorable as he is, Marcel’s most endearing quality is the appreciation he seems to feel for, well, everything—even a clump of lint he pulls around on a string and calls his pet. The shell portraits Marcel’s etched on the back of a rotational mirror commemorate neighbors and teachers for everyday displays of grace and generosity—qualities some of us too often take for granted. Having first lost his mollusk and then his family, Marcel takes nothing for granted. Instead of striving for more, he wants simply to conserve what he already has to not wind up with less.

Many people intellectually understand the virtue of practicing moderation but choose instead the convenience of immediate gratification. I consider myself lucky if a newly bought container of Tate’s cookies survives the commute between the grocery store and the pantry. Marcel, however, knows the value of a craisin. “It’s a treat,” he emphasizes while inviting us into a well-maintained snackpile behind a removable tile in the kitchen wall. There’s at least one bee with an unhealthy relationship to nectar that should heed this advice.

OK, so this one may be borrowed (from Sly Bletchley? Will Gletsky? Whale Jet Ski!), but it’s nevertheless a valuable piece of wisdom. In fact, it’s a lesson Marcel must learn himself (with a little help from Nana Connie) while trying to find his family. The chances he takes—for example, a “60 Minutes” interview about which he’s initially quite ambivalent—ultimately restore his community, but they also help Marcel achieve self-actualization. By the film’s ending, he’s shed his stage fright and come into himself, all because he accepted necessary risks and braved the big, unfamiliar world outside his window.

All those trailer and poster blurbs promising that Marcel will “change the way you see the world” aren’t just abstract hyperbole. Practically speaking, Marcel and Nan’s solutions to the daily challenges they face in a habitat sized for humans render familiar objects and appliances novel. From the tin cylinder around a pencil’s eraser which he repurposes into a knapsack to the toenails he uses as skis, Marcel’s innovations are ingeniously resourceful and endlessly creative. The great thinkers of antiquity informed their ideas on mathematics and physics through tactile interactions with the world. Marcel’s command of his environment — his orange-collection method incorporates some serious engineering!—proves he’s not just an armchair intellectual.

Harmonize with the universe

The call to be a higher power’s instrument for good in the world is one Marcel intuitively hears without doctrine or ideological subscription. Raised in a tight-knit community, he is all too happy to place personal gain aside and work toward a shared purpose. In the film’s closing moments, a gentle breeze hums through his shell while he’s perched on a windowsill. Speaking to Dean – whom he earlier urges to lead a more “integrated” life instead of just using people as documentary subjects–he says, “If I wasn’t here, the sound wouldn’t exist…I like the sound of myself connected to everything.” Call it string theory for dummies, but there’s something profoundly beautiful about the way the film distills this tenet of Marcel’s personal philosophy.