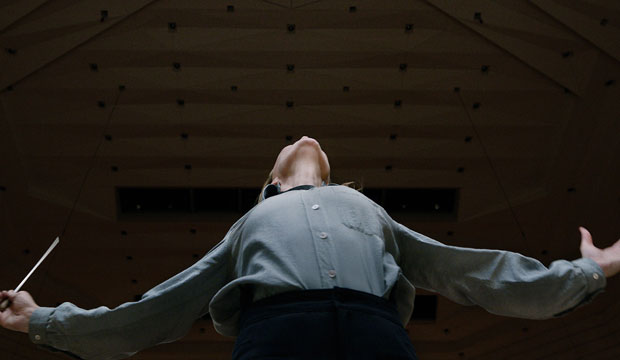 Appearing on screen in the highest of resolutions, Scorsese raved about Field’s drama, which also won star Cate Blanchett the NYFCC award for Best Actress.

“For so long now, so many of us see films that pretty much let us know where they’re going. I mean, they take us by the hand, and even if it’s disturbing at times, sort of comforting us along the way that it will be all okay by the end,” Scorsese said. “Now, this is insidious, as one can get lulled into this, and ultimately get used to it. Leading those of us who’ve experienced cinema in the past — as much more than that— to become despairing of the future of the art form, especially for younger generations. But that’s on dark days. The clouds lifted when I experienced Todd’s film, ‘TÁR.’ What you’ve done, Todd –– is that the very fabric of the movie you created doesn’t allow this. All the aspects of cinema and the film that you’ve used, attest to this.”

In speaking about the film, which follows an elite conductor (the title character, played by Blanchett), Scorsese praised Field for the way his filmmaking skills allow the audience to “exist in her head.”

“We experience only through her perception. The world is her. Time, chronology, and space, become the music that she lives by. And we don’t know where the film’s going,” Scorsese said. “We just follow the character on her strange, upsetting road to her even stranger final destination. Now, what you’ve done, Todd –– it’s a real high wire act, as all of this is conveyed through a masterful mise-en-scène, as controlled, precise, dangerous, precipitous angles, and edges geometrically kind of chiseled into a wonderful 2:3:5 aspect ratio of frame compositions. The limits of the frame itself, and the provocation of measured long takes all reflecting the brutal architecture of her soul — TÁR’s soul.”

As New York Film Critics Circle chair and Gold Derby contributor Jordan Hoffman explained, while the group doesn’t often allow for video presentations during the dinner, an exception was made for Scorsese who wasn’t able to appear at the event in person. “For you, we’ll do a video, it’s okay,” Hoffman told Gold Derby about his approach to handling Scorsese’s appearance.

For a full recap of the NYFCC dinner, listen below to a special episode of the Gold Derby Show about this year’s ceremony.