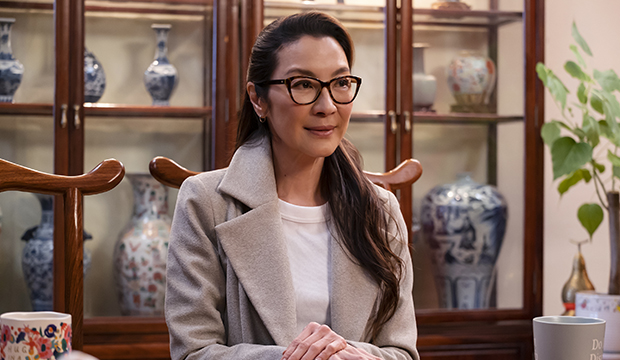 After the success of “Everything Everywhere All at Once,” Michelle Yeoh hopes “we’ve broken that glass ceiling” for Asian actors and Asian stories in Hollywood. She’ll even go a step further (no pun intended).

“I hope we’ve ninja-kicked it to hell and it will never come back like Humpty Dumpty together again,” Yeoh said Friday during the panel for her new Disney+ series “American Born Chinese” at the Television Critics Association winter press tour. But the newly minted Golden Globe winner cautioned that for this “true representation” to continue, TPTB must be invested in the telling stories about people who’ve for too long been left behind at the margins.

“The only way we can keep this going is by getting the right storytellers, having the studio executives understand and keep putting it forward, which will create more jobs, which will create more opportunities,” she continued. “And I think that’s what we’re asking for. Give us equal opportunities to prove that we are capable of doing all these things. I was very blessed with Evelyn Wang [in ‘Everything Everywhere All at Once’]. I could do comedy. Five years ago, nobody believed that I could do comedy. I could do drama, I could bring my martial arts into it. It was all the things an actor can hope for.”

Yeoh reunites with her “Everything Everywhere” co-star and fellow Globe winner and Oscar favorite Ke Huy Quan in “American Born Chinese.” Premiering in the spring and based on the graphic novel by Gene Luen Yang, the series comes from showrunner Kelvin Yu (“Bobs Burgers”) and Destin Daniel Cretton, who directed Yeoh in “Shang-Chi and the Legend of the Ten Rings” (2021). It follows Jin Wang (Ben Wang), an average teen whose life turns upside down after meeting foreign exchange student Wei-Chen (Jim Liu), leading him to become entangled in a battle of Chinese mythological gods. Yeoh plays one of them, Guanyin, aka the Goddess of Mercy.

“When you’re casting that role, American audiences may not know that, but it’s sort of casting the Queen of England or ‘The Great Gatsby.’ You need somebody that has that kind of weight,” Wu said. “I don’t know if there’s anybody more than Michelle Yeoh that can enter a room and you’re like, ‘Yeah, that’s a goddess.’”

Yeoh worked with Wu, Yang and Cretton to bring Guanyin to life to the small screen. And while you’ll once again see the actress flexing her martial arts skills on “American Born Chinese,” the Goddess of Mercy is a lover, not a fighter. “We were always, always very respectful of the Goddess of Mercy because she’s very iconic in our world, so we had to be careful of how we did that without taking too much liberty and sort of damaging her persona. But it was really fun,” Yeoh said. “The challenge, of course, was we had fight sequences in there. Working together with our stunt coordinator — she is the Goddess of Mercy, she doesn’t hit people. She’s not supposed to be, like, throwing punches and kicking, and boom! …. We did it in a such a way [that] it was always deflected. It’s almost like a dance. So it was nice to see the contrast of differences of fight sequences. That was what I thought our directors and writers brought to the forefront.”

Quan plays Freddy Wong, an actor who starred on a popular ’90s sitcom called “Beyond Repair,” on which his character was a cringey Asian stereotype. Quan was nervous about accepting the role, which was offered before “Everything Everywhere” came out. “When they offered me the role, I was so scared and I said, ‘You gotta promise me one thing. When the show comes out and people hate my character and nobody wants to hire me again, you have to promise to give me a job.’ And they said, “Yeah, don’t worry!’” he shared. “But under the hands of Destin, Gene and Kelvin, of course, it hits the right tone. It’s just perfect.” 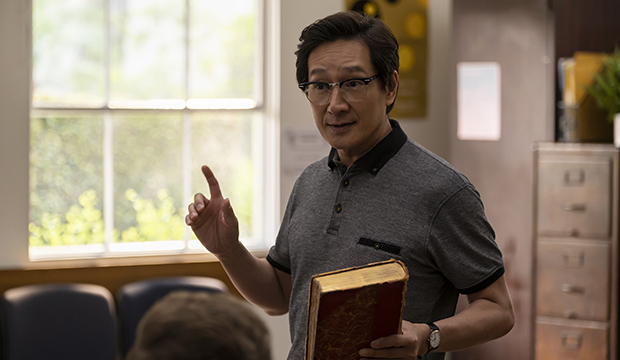 Ultimately, the actor took the role because “it was important to show the audience today what it was like to be an Asian actor in the late ‘80s and early ‘90s.” Quan, of course, left acting for 20 years because of the lack of roles for Asian performers following his breakthrough roles as a child actor in “Indiana Jones and the Temple of Doom” (1984) and “The Goonies” (1985). He was inspired to return to acting after the release of “Crazy Rich Asians” (2018), starring Yeoh, the first studio film with an all-Asian cast since “The Joy Luck Club” (1993).

“When the show comes out, I think the audience is going to have a range of emotions. Some are going to be very angry with it, some are going to think it’s funny. In fact, when I was on set playing this character, I went through that range of emotions, and it’s OK,” Quan said. “Because that is something for us to talk about today and to make progress. To be better. But it’s a conversation that needs to be had. Of course, a lot has changed, but I want the audience to see it. And there’s a big reason why I was very enthusiastic about this character after the discussion and it doesn’t come later until later [in the season], so for the audience that watches it, please be patient and you’ll understand what this character will be on the show.”