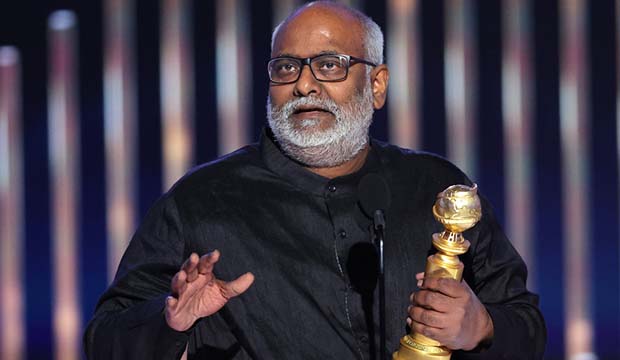 “Naatu Naatu” was a surprise winner for Best Song at the 2023 Golden Globes on Tuesday night. Composer M.M. Keeravani went into the ceremony ranked third in our odds for his dance number from  S. S. Rajamouli‘s epic action film “RRR.” Lady Gaga‘s anthem “Hold My Hand” from “Top Gun: Maverick” was favored to win, followed by Rihanna‘s emotional ballad “Lift Me Up” from “Black Panther: Wakanda Forever.” Rounding out the field of five were Taylor Swift‘s “Carolina” from “Where the Crawdads Sing” and “Ciao Papa” from “Guillermo del Toro’s Pinocchio.”

It wasn’t a total shock to all prognosticators, some of whom foresaw a potential vote split between the trio of pop’s biggest powerhouses. “Naatu Naatu” also stood out as an infectious, uptempo banger amongst more somber competition. It weaves itself seamlessly into an unforgettable musical number in a film that has become a worldwide phenomenon.

“Naatu Naatu” now leads our Gold Derby odds for Best Song at the upcoming 95th Oscars. If it wins it will be only the fourth song in a language other than English to take the prize. It would join the Greek “Never on Sunday” from the film of the same name, the Spanish “Al Otro Lado Del Rio” from “The Motorcycle Diaries,” and the Hindi “Jai Ho” from “Slumdog Millionaire” on the short list of non-English songs to prevail.

As of this writing nine of the Expert journalists we’ve surveyed from major media outlets are predicting “Naatu Naatu” to win, compared to five for “Lift Me Up” from “Black Panter: Wakanda Forever,” four who predict “Hold My Hand” from “Top Gun: Maverick” and one betting on “Stand Up” from “Till.” “Naatu Naatu” also has a slight edge with the Editors who cover awards year-round for Gold Derby. However, the All-Star Top 24 Users who got the highest scores predicting the last two years’ Oscar nominations and our Top 24 Users, the best predictors of last year’s Oscar noms, lean ever so slightly towards “Lift Me Up.”