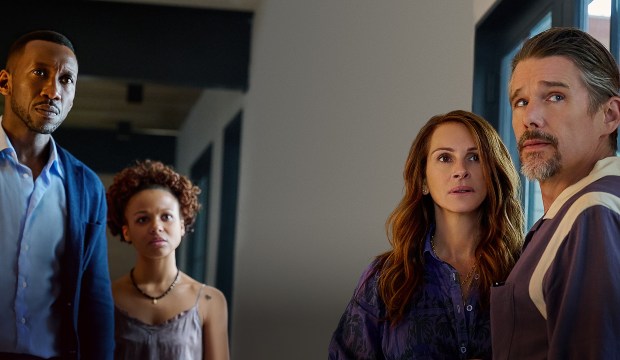 Netflix released a  “Save The Date” video Wednesday morning, highlighting its most mainstream (and likely biggest budget) titles from now until the end of the year. (The “Save The Date” did not say where they were registered or if the affair was black tie.)

To the tune of “Industry Baby” by Lil Nas X and Jack Harlow, the sizzle reel is bursting with action and a surprising amount of A-list stars. Some are sequels, like Chris Hemsworth back for the international thriller (and chase scene-primed) “Extraction 2,” out June 16, and Adam Sandler and Jennifer Anniston cracking wise and solving crimes in “Murder Mystery 2,” out March 31. Also, Idris Elba is back as the British detective John Luther after five seasons of BBC television in “Luther: The Fallen Sun,” out March 10.

Other notable titles include “The Killer,” from director David Fincher, starring Michael Fassbender and Tilda Swinton (out November 10), based on a French graphic novel, not the John Woo film. Also, Jennifer Lopez stars as an assassin in Niki Caro’s “The Mother” (out May 12), Gal Gadot is in heavy action mode with Jamie Dornan in “Heart of Stone” from “Peaky Blinders” alum Tom Harper, out August 11. And Julia Roberts, Mahershala Ali, and Ethan Hawke star in the adaptation of the bestseller “Leave The World Behind” (out December 8).

F. Gary Gray collected a slew of stars led by Kevin Hart and Gugu Mbatha-Raw for the airborn heist picture “Lift” (out August 25) for what looks like a quality action-comedy, and Sandler is back again voicing some kind of lizard in an animated film “Leo” (November 22).

It’s a lot of material and it’s all in the video—including Millie Bobby Brown in a high fantasy called “Damsel” (October 13) and Zack Snyder’s explosive science fiction adventure “Rebel Moon” with Sofia Boutella out December 22. Check out the full reel below.

But wait, there’s more. While Netflix didn’t show footage of these titles in the save-the-date teaser, the streamer did note that each will arrive in 2023: Bradley Cooper’s “Maestro” about Leonard Bernstein is due in fall 2023 as is Oscar winners Elizabeth Chai Vasarhelyi and Jimmy Chin narrative film “Nyad” starring Annette Bening. Another fall 2023 movie to consider is “Spaceman” starring Sandler, Paul Dano, and Carey Mulligan. Titles flagged as 2023 releases without a corresponding season attached include Dev Patel’s directorial debut “Monkey Man,” George C. Wolfe’s “Rustin” with Colman Domingo, John Ridley’s “Shirley” with Regina King, and an untitled Wes Anderson film based on the works of Roald Dahl.