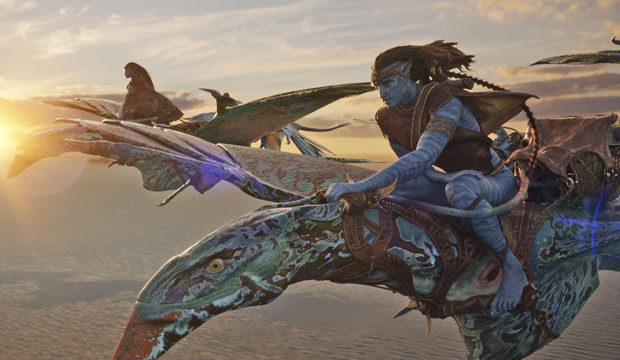 As has normally been the case for the last weekend of the year, there were no new wide releases, so it was safe to assume the top five would remain the same under normal circumstances. But we haven’t been anywhere close to “normal circumstances” going on three years now, and sure enough, there were more than a few surprises.

SEE January 2023 box office preview: ‘M3GAN’ kicks off a month full of thrillers and other odds and ends

James Cameron’s “Avatar: The Way of Water” did even better than expected in its third weekend, bringing in an estimated $66.8 million for the three-day weekend – up 5% from last weekend – and $86.3 million, including Monday, bringing its domestic total to $444.4 million. That officially makes it the second-highest grossing movie of 2022, even if that includes two days of box office from 2023. There’s a good chance that the movie will hit $500 million sometime in the next week or two, but as of now, it’s the 24th highest-grossing film of all time, domestically. Although “The Way of Water” started its run $21 million behind the 2016 “Star Wars” spin-off “Rogue One,” also opening the week before Christmas, it has now passed that movie’s gross and should continue to have a strong month of January.

Internationally, Cameron’s sequel has grossed $957 million through Sunday, including the $186.7 million made in overseas territories over the New Year’s weekend, bringing its worldwide total to $1.38 billion.

The animated sequel, “Puss in Boots: The Last Wish,” remained in second place with $16.8 million, up 35% from its opening Christmas weekend, with an estimated $22.6 million through Monday. It has grossed $67 million domestically, although that’s still behind the $90.2 million made by the animated sequel “Sing 2” last year. “Puss in Boots” made $22.4 million internationally this past weekend, bringing its global total $129.6 million.

The biggest surprise of the weekend had to be Marvel’s “Black Panther: Wakanda Forever” bouncing back into third place after being bumped out of the top five by all of the new movies over Christmas weekend. It made another $4.8 million over the three-day weekend with $6.5 million including Monday, which brings its total through Monday to $439.7 million, just behind “Avatar.”

The Whitney Houston biopic, “I Wanna Dance with Someone” took fourth place with $4 million, down 16% for the three-day weekend and $4.9 million with Monday. It has grossed just $15.5 million in its ten days in 3,625 theaters, which means it probably won’t be in that many theaters for much longer. It has done better overseas, where the movie has grossed $28 million through Sunday.

Damien Chazelle’s “Babylon” dropped to fifth place with $2.6 million, down 28% from its opening weekend, and $3.4 million for the four-day with Monday. It has grossed less than $11 million so far, which is not a good chance for the movie’s awards prospects.

Universal’s hit holiday action-comedy “Violent Night” brought in $2.1 million (-40%) over the three-day weekend and $2.6 million through Monday, bringing its domestic total to $48 million.

A24’s indie drama “The Whale,” which is putting Brendan Fraser firmly into awards season, remained in seventh place, taking in an additional $1.3 million over the weekend with $1.7 million, including Monday. It has made $5.8 million so far.

Steven Spielberg’s “The Fabelmans” keeps rolling along, adding more theaters each weekend. This weekend it was in 1,149 theaters where it added another $1 million (up 37% from Xmas weekend), and it has grossed $12.4 million through Monday.

Sony platform-released Tom Hanks’ remake “A Man Called Otto” into four New York and L.A. theaters ahead of its January 13 nationwide release, where it earned $60,000 or $15,000 per theater.

SEE Is ‘Avatar: The Way of Water’ unbeatable for Best Visual Effects at the Oscars?

While the majority of players in Gold Derby’s box office game wisely predicted that “Avatar” would be #1, fewer players had it making $50 to 75 million, although the real decider for this week’s winner(s) will probably fall to the 39 players who correctly picked “Black Panther” for third place.

“paulhardister” won the December 23 box office game, going 6 out of 6 with 36,909 points, putting him ahead of the other four players that predicted all six placements correctly.

On Friday, Universal will release the horror film, “M3GAN,” nationwide, and on Wednesday, you can read Gold Derby’s weekend preview to see how it might fare against “Avatar.”