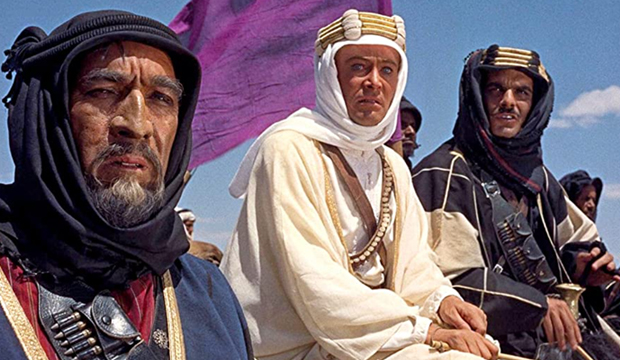 It’s hard to believe that six decades has passed since David Lean’s breathtaking epic “Lawrence of Arabia” was released. Nominated for ten Oscars, the landmark classic revolves about the  enigmatic T.E. Lawrence, the  British intelligence officer stationed in Cairo who helped the Arabs crush the Ottoman Empire. Lean, who had won his first Oscar five years earlier for the World War II drama “The  Bridge on the River Kwai,” was the peak of his powers as a filmmaker. And he elicited dazzling performances from his uber-handsome stars, Peter O’Toole as Lawrence and Omar Sharif as Sherif Ali. The later is memorably introduced in the film with a long, slow shot of him travelling on a camel in the desert.

It was no surprise that “Lawrence” conquered the 35th Academy Awards which took place April 8, 1963 at the Santa Monica Civic Auditorium earning seven statuettes including film, director, cinematography, editing, and of course, for Maurice Jarre’s indelible score. O’Toole, who had made a few films before “Lawrence,” lost Best Actor to Gregory Peck for “To Kill a Mockingbird” and Sharif, who was a popular star in his native Egypt, lost his bid for supporting actor to Ed Begley for “Sweet Bird of Youth.”

It wasn’t not an easy shoot. It was difficult maneuvering 65mm cameras in the desert and then there were the camels. The production had a devil of a time preventing them from getting seasick while traveling by boat from Jordan to Spain.

And poor O’Toole. During the one-year production, the tall, reedy actor lost 28 pounds, sprained an ankle while breaking the other. He also dislocated his back and cracked his skull.

I had the great good fortune to talk to O’Toole and Oscar-winning editor Anne V. Coates several times while working at  the Los Angeles Times. Here are some of their memories.

O’Toole admitted the mysterious Lawrence was the most difficult part he ever played. “I am nothing like T.E. Lawrence, in no way. I was astonished that David wanted me to play the introverted, rather sexless, strange, enigmatic man. David suggested to me that rather than try to make all of these points, if I just made myself speak rather quietly and rather quickly. I remember doing it; I still don’t know how I did it. I doubt to this day I could have sustained that performance over three or four hours on stage.”

He felt like a young bullfighter. “I was a very young and ambitious actor playing the lead in a massive film with a beautiful script. Every day I would wander onto the set, hang up my cape and through this tunnel would come Alec Guinness and then Jose Ferrer and then Anthony Quayle, Tony Quinn, Arthur Kennedy. It was wonderful. You never get over it. These were masters and Omar and I had a great good fortune to work with them . We had such fun.”

And he and Sharif became great friends. Though O’Toole decided to call him Fred. “How could he be called Omar Sharif?,” he noted laughing. “I came to see his airplane [land on location] and here is this beautiful young man with black hair and whiskers staring out of the window and they said he was Omar Sharif. I said, ‘That’s impossible.’”

The production shut down for three months because Oscar-nominated screenwriter Robert Bolt, who wrote the script with blacklisted scribe Michael Wilson, hadn’t finished the script.  To make matters worse, the political activist Bolt was arrested for protesting the proliferation of nuclear weapons. If Bolt apologized for the protest, he wouldn’t go to prison and the script could be completed. According to Coates, Bolt “refused to apologize. They wouldn’t let him out.”

So , the film’s powerful producer Sam Spiegel took matters into his own hands. He went to the jail and and pleaded with him to apologize. Bolt finally apologized but soon regretted it and never spoke to Spiegel after the film was complete.

Just as with O’Toole and Sharif, editing “Lawrence” changed her career. Though she had edited a handful of films, Coates never cut a film with such scope . “It was nerve-racking cutting for David Lean because he was one of the champion editors,” she noted. “I was terrified, but I am a fairly go-ahead person, so I went ahead and did it.” She even suggested to Lean that she edit the second half of the film first. He agreed. “The main reason was there was so much more action in it, the trains and the fights and the big bloodbath. It was much more difficult and complicated for the sound department. The other part was camels plodding across the desert, but not so much action.”

O’Toole found Lean a tough nut to crack, describing him as “inscrutable.  We were friendly. Our last talk was about our first loves. I talked to my first love, who I still had a photograph of and he talked of his, but he didn’t have a photograph. But I never got near him.  We were on good, friendly conversational terms, but I never got near the man. Nobody did. Omar and I used to watch him. He would be up very early and the first thing both of us would see every morning would be David sitting-usually on the ground or on his little stool-with a cigarette in a holder, looking at the horizon, dreaming up his first shot.”