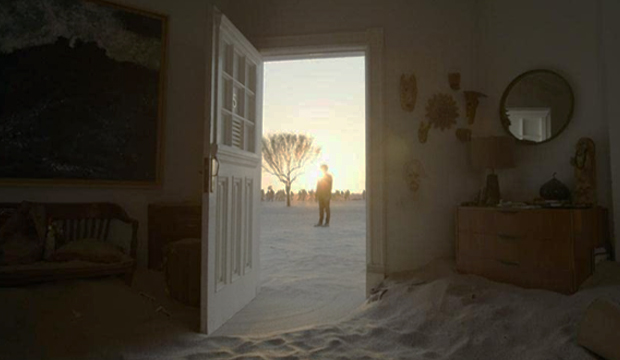 Recent recipients of the cinematography-centric event’s runner-up prize to also compete at the Oscars include Bruno Delbonnel (“The Tragedy of Macbeth”), Łukasz Żal (“Cold War”) and Bradford Young (“Arrival”). Should Khondji join that list when Academy Award nominations are announced on January 24th (he’s eighth in our Best Cinematography odds), he’ll only be getting his second-ever nom—astonishing, considering a career that spans 30 years and includes collaborations with David Fincher, Woody Allen, Bong Joon-ho and Michael Haneke. He also lensed the Safdie brothers’ 2019 “Uncut Gems,” a thriller with the visual electricity of the helicopter scene in “GoodFellas,” and Nicolas Winding Refn’s meticulously stylized limited series, “Too Old to Die Young.”

“Bardo,” its title taken from the Buddhist conceptualization of purgatory, explores the mortality and spiritual crisis of Silverio Gama (Daniel Giménez Cacho), a celebrity documentarian and Mexican expatriate who’s clearly a surrogate for Iñárritu. Aesthetically, the movie draws from the paintings of Spanish surrealist Salvador Dalí, the films of Italian neorealist Federico Fellini, and its own director’s previous partnership with DP Emmanuel Lubezki. Khondji doesn’t so much bring his own style to “Bardo” as adapt the visual language of Iñárritu and Lubezki’s back-to-back Oscar winners, “Birdman, or the Unexpected Virtue of Ignorance” and “The Revenant.” That a viewer can walk away and think, “Chivo’s done it again!” is a testament to how well Khondji understood this assignment.

Age, Silverio complains at one point, is accelerating his experience of the world. “It starts to feel like a convulsion. A tumult of images, memories, slivers all knotted together.” The movie’s kinetic cinematography emulates its protagonist’s description of life as a fluid, unbroken parade of loosely connected stimuli. “Bardo’s” most recurrent image is of Silverio wandering some chaotic scene in bewilderment, an involuntary spectator to his own existence. These moments are shot in long takes and often from low angles. Combined with a fisheye lens, Khondji’s deep-focus photography produces frames akin to reflections one sees in a concave mirror, thereby visually communicating Silverio’s overwhelmed and (at one point literally) shrunken state. These perceptually elongated images almost take on the exaggerated dimensions of a shadow, an intention announced by the movie’s opening shot (an homage to Fellini’s “8 1/2,” as well as a callback to “Birdman,” that projects Silverio’s silhouette onto the desert floor as he repeatedly attempts, and fails, to master flight).

The film’s centerpiece is undoubtedly a single-take dance sequence at a Mexico City nightclub. Affixed to a massive rig Khondji nicknamed “the Monster,” the camera snakes through a crowd of roughly 800 extras with impeccable precision. There’s a spectral quality to the way Khondji’s gliding visuals both distort and accelerate the viewer’s perspective—a thematically apt choice, given the meaning of the film’s title and the revelation that Silverio is, essentially, a ghost we’ve been following since a stroke left him comatose. In a fate that bitterly manifests the barrage of sight and sound he feels has come to define his waking life, a paralyzed Silverio sits on an empty public train and watches the lights of Los Angeles dizzyingly pass him by.

“Bardo’s” visual compositions, a strong case for Khondji’s first Oscar nomination since 1996’s “Evita,” work in tandem with its production design and script to express Iñárritu’s surrealist aims, making the film a piece of stream-of-consciousness storytelling in both content and form. “Bardo” was just nominated by the American Society of Cinematographers, a strong predictor of the Oscars lineup, over “Avatar: The Way of Water” and “The Fabelmans.” Expect to see Khondji rise in our odds soon. The DP’s most recent project, Bong Joon-ho’s “Mickey 17,” is currently in post-production and scheduled for a 2024 release.