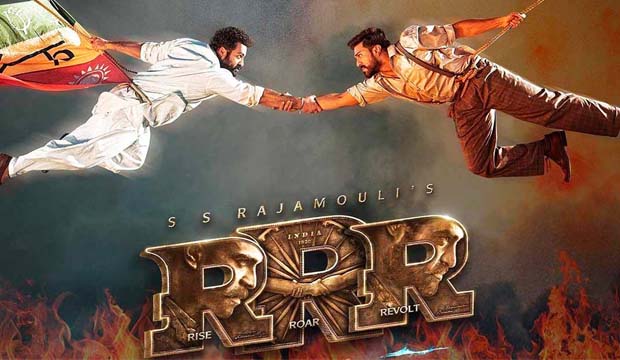 I was privileged to attend a screening of  India’s crazy, mega-intense historical epic “RRR” Monday night at the TCL Chinese Theatre IMAX, and it’s changed everything I thought about this awards season and possibly my life itself up to this point. It may be the most fun I’ve ever had in a movie theater, aside from that one time with Stephanie during my sophomore year in college. But I digress. The Indian Telugu-language action-adventure extravaganza from director S.S. Rajamouli and starring N.T. Rama Rao Jr. and Ram Charan as real-life revolutionaries Khomaram Bheem and Alluri Sitarama Raju, respectively. These guys aren’t just men who become unlikely friends, form a bond and ultimately undertake secret missions to free their people from British colonial rule. They’re literal unbreakable superheroes.

The movie based on them quickly became a blockbuster in India after being released there last March and grew steadily into a cult phenomenon in America after it started streaming on Netflix on May 20 of last year. Now, it’s a bonafide worldwide sensation. But in the United States, the groundswell kept building, and the awards chatter has grown louder and attention more intense, especially in December after “RRR” garnered five nominations at the Critics Choice Awards, including for Best Picture and Best Director for Rajamouli as well as Foreign Film. It’s also earned Rajamouli a near-shocking top directing prize from the New York Film Critics Circle (NYFCC).

Yes, there’s a chance the film will land an Oscar Best Picture nomination, somewhat less likely one for Best Director. There’s also a possibility it will be cited for Original Song for the catchy dance number “Naatu Naatu” that plays out charmingly and powerfully about halfway through “RRR” and won the Golden Globe on Tuesday night, beating out tunes from the likes of Lady Gaga and Taylor Swift. (The film wasn’t put up by India as its official submission for Best International Feature, which has only served to inject fuel into its legend.) But this is more about the experience of watching “RRR” (which stands for “Rise, Roar, Revolt”) on a big screen – in this case, the biggest screen via IMAX. The special screening came complete with a live introduction from none other than J.J. Abrams, who sang the film’s praises before the sold-out house of nearly 1,000. And afterward, Rajamouli, Rama Rao Jr., Charan and composer M.M. Keravani (along with several members of Rajamouli’s family) appeared onstage in front of the adoring crowd to answer questions and thank everyone for their support.

Indeed, the Monday night screening – full to the brim despite a steady downpour – was the kind of adventure we’ve been led to believe is long in the past in the age of COVID and ongoing evidence of people abandoning the movie theatre experience. Tickets reportedly sold out in two minutes once going on sale. Yes, people who have had the opportunity to watch the film stream from the comfort of their living room for eight months opted to flock to an event in the middle of a Biblical-seeming rainstorm for the opportunity to view it the way God and Rajamouli intended.

It was a lot like one of those midnight “Rocky Horror Picture Show” events, but on steroids. A palpable excitement filled the air prior to the start. Once it began, all heck broke loose. There was stomping and shouting, wild applause, random outpourings of passion, and – during the designated number – dancing in the aisles and in an open area in front of the giant screen. People reacted to the emotion of the story with anger, joy, relief, overall catharsis. And it was a total blast to be part of it all, much more like a spiritual revival than a moviegoing experience. The response matched the tone of the movie itself. For the uninitiated, “RRR” is basically a live-action cartoon, deliriously over the top, not a subtle moment to be found.

SEEOscar predictions: Why India’s ‘RRR’ could ‘rise, roar and revolt’ despite no Best International Feature submission

(SPOILER ALERT) Yes, the good guys win. But the way the film turns the British Raj into Nazi-like villains understandably hasn’t gone over particularly well in the UK. There have been some scathing reviews of the movie for that and other reasons, namely its purportedly radical misrepresentation of history. But no one cared about any of that on Monday night, where the three-hour movie played like the Second Coming of “Gone with the Wind.” One woman in the audience admitted to having seen “RRR” 33 times, though it was unclear what she expected to get out of it on viewing #34 that she’d previously missed.

“RRR” isn’t a great movie by any stretch, but it’s so wildly entertaining that you can’t help but get caught up in the gloriously outrageous ride. And that was really the beauty of the screening. Those who mourn the imminent demise of attending movies in person should point to this as a way forward: turning a movie into a can’t-miss communal happening. The point is that it’s something you can’t get from watching at home, an event that was alternately harrowing and exhilarating that left you spent but gratified – and, well, possibly a little shellshocked too, but that’s all part of the deal.