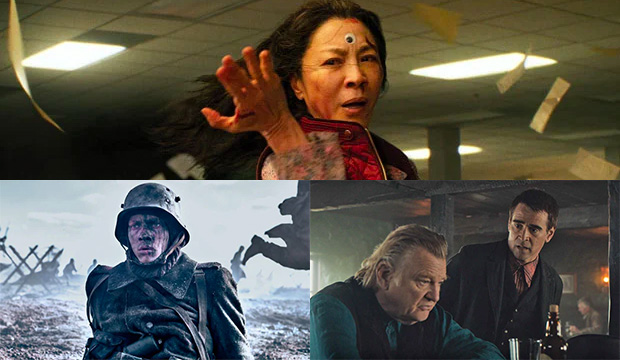 Even in an era when ratings are falling for the Academy Awards telecast annually, there is still something magical about the Oscars, particularly to those of a certain age. Little in entertainment culture can match it and certainly nothing in the awards pantheon. I woke up this morning at 4:45 a.m. and sprang out of bed in anticipation of the 2023 Oscar nominations. After all of the speculation and debate, we’d finally find out who/what made the cut and who/what missed. If you’re a movie fan, it’s basically Christmas morning, and Santa has left something under the tree for every one of us. Now we get nearly seven weeks more of hypothesizing and conjecture and this-is-why and this-is-why-not to look forward to. Lucky us.

Indeed, now we look to the March 12 ceremony for closure, though it’s the anticipation that’s most delicious. Following today’s nominations announcement, I’m now peering into the crystal ball for a number of reasons. Allow me to share those with you right now, because I’m pretty sure you haven’t read quite enough Oscar stories yet today. Have you?

SEE2023 Oscar nominations by film: ‘Everything Everywhere All at Once’ leads with 11

The Best Actress Race: Few could have guessed that this lineup would be minus Danielle Deadwyler for “Till” and Viola Davis for “The Woman King.” Even fewer foresaw Andrea Riseborough getting a nom for “To Leslie,” a microbudget indie made for less than $1 million. This naturally sets up the following question: can Riseborough go all the way and pull off what may be the biggest upset in Oscar history?

Then there is the Tale of the Two Michelles. We’ve been privileged to follow the bouncing Michelle Williams candidacy. First she was considered a lead actress shoo-in for “The Fabelmans,” then less of a sure thing, then a likely supporting actress nominee instead, then a longshot to pull off either one – only to land back at square one on nominations morning. Shows what the experts know. There is also the Michelle Yeoh angle. Here is a highly respected/beloved actress who is finally being recognized at age 60 after 40 years of slogging in the trenches as a gifted performer. Will voters reward her for a film (“Everything Everywhere All at Once”) that’s looking like it could be an Oscar night juggernaut?

Oh, and let’s not forget Cate Blanchett for “TAR.” She’s only the favorite who has been sweeping through awards season.

The Best Actor Race: This is shaping up as quite the three-man race, with co-favorites Brendan Fraser for “The Whale” and Austin Butler for “Elvis” taking on Colin Farrell for “The Banshees of Inisherin.” Fraser gave such an emotional, misty-eyed speech in accepting his Critics Choice Award that you would think it cements his status as a frontrunner. Voters love nothing more than a good solid tale of redemption. But Butler isn’t exactly lacking for momentum and sentiment himself. Farrell, meanwhile, is set up to snatch the trophy out from underneath both as the most solid of longshots. Let the debate begin.

The Best Director Race: The Daniels (Daniel Kwan and Daniel Scheinert) are probably favored for their work on “Everything Everywhere All at Once.” But how are you not going to give this trophy to Steven Spielberg when the last time he won was in 1999 for “Saving Private Ryan” (a quick bit of math tells us that was 24 years ago) and he’s up for the most personal film of his career – a movie that’s semi-autobiographical? On the other hand, those pesky Daniels made one of the most wildly inventive features in years. This one’s gonna be close, which is always when it’s the most fun.

The Coronation of Angela Bassett: Yes, coronation. The other four nominees in Bassett’s supporting actress category (Hong Chau for “The Whale,” Kerry Condon for “The Banshees of Inisherin” and both Jamie Lee Curtis and Stephanie Hsu for “Everything Everywhere All at Once”) are all more than worthy nominees. But it’s got to be a little bit embarrassing to Oscar voters that the extraordinary “Black Panther: Wakanda Forever” actress has never won one of these things and was indeed nominated only once before, 29 years ago for “What’s Love Got to Do With It.” This is Bassett’s year, and it’ll be fun to hear her classy acceptance following a standing ovation.

Strange Bedfellows: I love it when categories contain such radically incongruous nominees. Take Best Adapted Screenplay. You have everything from “Women Talking” to “Glass Onion” to “Top Gun: Maverick.” The “Top Gun” nomination here in particular is a head-scratcher. Nothing against the five-man team responsible for the screenplay and the story, but when I think of a Tom Cruise action-adventure blockbuster in the sky, it’s not the script that comes racing to mind. At the same time, “Maverick” failed to get a cinematography nomination despite the film’s spectacular aerial exploits. Makes. No. Sense.

And yes, I’m still adjusting to this whole adulting thing: I can’t wait to hear a presenter introducing the animated short nominee, “My Year of Dicks.” I must be Beavis. Oy maybe it’s Butt-head.