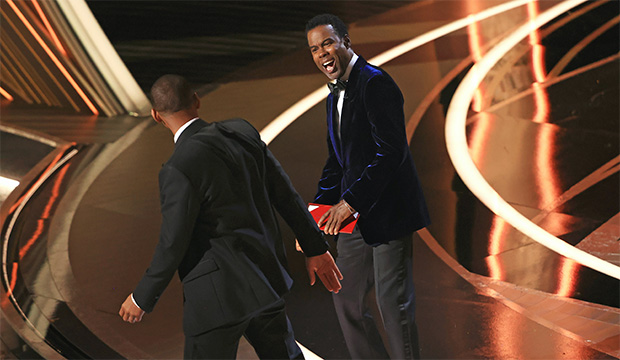 If you watched the Golden Globe Awards on January 10 and the Critics Choice Awards this past Sunday,  you’d be convinced that the silencing bleep was a language all its own. As one of the last vestiges of live programming, awards shows carry the danger of the unpredictable. That means plenty of what are politely known as “f-bombs,” and “s-words” and the four-syllable word that begins with “mother,” and the spelling out of “bs,” and perhaps a few other assorted terms common in everyday language but verboten on that peculiar anachronism known as broadcast television. The reason for all the bleeping of late is the fact the Globes aired on NBC and the Critics Choices on The CW, which means anything deemed explicit or profane (so-called “objectionable content”) had to be silenced.

In this case, silence is anything but golden.

It’s a curious thing. While it seems to make sense that children should be guarded from curse words, the hardest-working person in an awards telecast shouldn’t be whomever is in charge of the mute button. This is nothing new, of course. As long as there have been TV microphones and live programming, the medium has needed to control what comes out of mouths. But it’s no longer every mouth, just the ones on what used to be called over-the-air networks. In case you haven’t checked lately, the rules don’t apply equally across the board. Not even close. Basic and premium cable networks as well as streaming services can allow swearing with impunity because Federal Communications Commission regulations don’t cover subscription services, only TV that people purportedly don’t pay for and is part of the public airwaves.

News alert: nothing is free anymore. The public airwaves no longer exist. It’s tough to find an antenna that will bring pictures and sound to your TV monitor that don’t also involve a cable or internet connection. It’s grown so ridiculous that network comedies flaunt the rules by scripting bleeps into the dialogue. It’s easy to see why. On the lower end of the dial, you can’t openly curse, while a few channel numbers up the obscenities are flying. What’s the difference? Nothing. It’s all the same dial controlled by the same remote or mouse or finger. It’s just that on a few channels, antiquated rules apply that pretend it’s still 1964 and leave them looking completely puritanical, uncool and out of touch.

This brings us back to the awards show bleep-a-thons we’ve recently been treated to. Are eight-year-olds flocking to the Golden Globes? Are their virgin ears going to be forever burnt to a crisp if they hear someone utter the word “fuck”? Just whom are the censors supposed to be protecting, anyway? I’m making a case here for doing away with the bleep dance altogether and letting the FCC chips fall where they may. Let’s have ourselves a good old-fashioned test case, shall we? I’d like to hear the government’s argument that a couple of channels need to remain sterile and profanity-free to protect viewers when hardcore porn is a literal click away, right next-door.

SEECritics Choice Awards show: Passion, tears and endless hikes up to the stage

It isn’t that I’m so enamored of smutty language, What I’m a fan of is fairness and people being able to speak their truth unencumbered by shackles. Why should someone experiencing one of the high points of their lives, winning a prestigious Hollywood award, need to concern themselves with having their words erased in real time? Here we have an interesting dichotomy. They serve the presenters and nominees booze to loosen everyone’s tongue and then put down the clamps when they let a “fuck” or “shit” or “ass” slip through in the heat of the joyous moment – and those at home are left scratching their heads and struggling to lip read. It’s insane.

They already have a 45-second limit on their acceptance speeches before the music starts to play them off (though in truth the big category winners are given at least twice that). Erasing pieces of what they say in addition to the time constraint feels like a whole lot of overkill. If we’re going to be so uptight about their length and specific words, why not just hand the speech to an announcer to read the non-excised parts aloud and be done with it?

Is the idea that the Hollywood awards shows are responsible for upholding some sort of dignity in this process? If so, ha! Looseness and informality are what make these exercises fun. Added stuffiness will only drive away a viewing audience that’s already abandoning awards season in droves. They honestly don’t need added excuses to change the channel.

If the bleeping tradition keeps up, all the awards shows, the Oscars included, are going to wind up on streaming or cable services. That shift has already begun with the new multiyear partnership between the SAG Awards and Netflix that will find the ceremony streaming live on Netflix beginning in 2024. This year, on February 26, it will stream on Netflix’s YouTube channel. This is how it all starts. If the networks won’t take the bleeping away, then take it the bleep away to a place where the full range of the English language is celebrated rather than selectively muted.

Could the Academy Awards fly over to streaming, too? Sure. But it will take a while. ABC’s contract to broadcast them currently runs through 2028, but a lot of viewers were irritated that they couldn’t hear the back-and-forth of the protagonists following Will Smith’s shocking onstage slap of presenter Chris Rock during last year’s show. It was riveting drama that cried out to be heard. But the American broadcaster went silent. Viewers who clamored to hear it were required to take to social media and the Australian and Japanese feeds to discover what really went down. ABC, you see, has imposed a video and audio delay on the Oscars since 2004, originally in response to the FCC’s calling Bono’s using the term “fucking brilliant” during NBC’s 2003 Golden Globes telecast “indecent and profane.”

The truth is, if a show is presented on a delay, it can’t be truly live. And if it’s bleeped, it can’t be fully genuine. It’s really that simple. Whether it’s the producers or the network standards and practices department, they shouldn’t have the power to reign in our viewing experience for a live show. If it’s fear of the conservative special interest groups that’s keeping the bleeps in place, it’s time to face them down. If it isn’t, it’s time for free speech to return in all its crude and fucking brilliant glory.