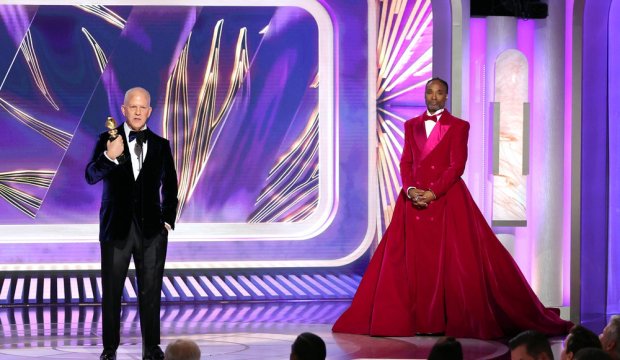 Writer-producer Ryan Murphy made sure to share in the glow while accepting his honorary Golden Globe Award on Tuesday night. The “Glee” and “American Horror Story” creator won the Carol Burnett Award for “outstanding contributions to television on or off the screen.” The special prize was first issued to Burnett in 2019, and the others who have won are Ellen DeGeneres and Norman Lear. (No prize was given last year.)

Murphy’s latest statuette was handed to him by Billy Porter in a velvet fuschia tuxedo gown. Murphy, who co-created Porter’s series “Pose” took the opportunity to thank Porter, and salute others in the room.

He noted that since the Globes were not televised the previous year, some may not have been aware that Michaela Jaé Rodriguez had won for Best TV Drama Actress for “Pose.” Murphy said that “in doing so, MJ from Newark, New Jersey, became the first trans actress ever to win a Golden Globe. Wow. How I would have loved for MJ to be on the stage getting the standing ovation she deserved for making history.” He then prompted her to stand (“she’s my guest tonight; she’s at my table”) and the crowd then gave her a brief standing ovation.

After reminding folks that he worked with Burnett on “Glee,” Murphy compared her fearlessness to Billy Porter’s. “Growing up in Pittsburgh, Billy was constantly told that he was not worthy. Said Billy, ‘When I demanded to be seen as a three-dimensional human being, the work dried up.’ But Billy Porter kept at it, and now he’s one of the most iconic actors of his generation with two Tonys, a Grammy, and an Emmy win for ‘Pose’ to show for it.” He also joked that Porter couldn’t wear the tuxedo gown he wore at the Oscars because, as the performer put it, “bitch, it’s in a museum.”

Murphy then gave a shout-out to Niecy Nash-Betts. “A mother of three, she was told only a couple of years ago when she wanted to marry the love of her life, Jessica Betts, that she couldn’t, shouldn’t do that. She might never work again. Her community and her industry would abandon her. Niecy Nash chose love not fear, and tonight she’s Golden Globe nominee Niecy Nash-Betts and she’s had the biggest year of her entire career with ‘Dahmer’ and ‘The Rookie: Feds.’” (Incidentally, ‘Dahmer – Monster: The Jeffrey Dahmer Story’ is a Ryan Murphy production.)

Next, Murphy brought up how when Matt Bomer grew up in Texas he was told to never come out and to lie because audiences would never buy him as an action hero. The producer then called him a “hero in life, that has defied ridiculous rules” and saluted his previous Golden Globe win for Murphy’s prediction of “The Golden Heart.”

Lastly, he saluted Jeremy Pope, a Murphy alum from “Hollywood” with a Golden Globe nomination for the indie film “The Inspection,” who was also told to hide who he was when growing up in Florida. “Jeremy Pope is the future,” Murphy said.

He then explained that he was taking so much time from his own speech to talk about others “to make a point of hope and progress.”

He went on, “when I was a young person at home in the ’70s watching ‘The Carol Burnett Show,’ I never ever saw a person like me getting an award or even being a character on a TV show. It’s hard being an LGBTQ kid in America, in fact all over the world,” he said. “You were often told you will never become anything. You have to hide your life to survive. But for those kids watching tonight, I offer up MJ and Billy and Niecy and Matt and Jeremy as examples of possibility. There is a way forward.” 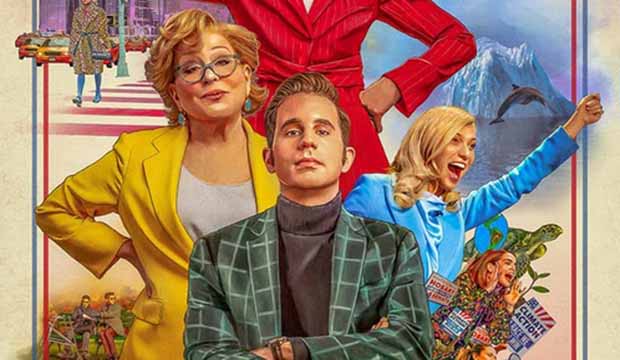