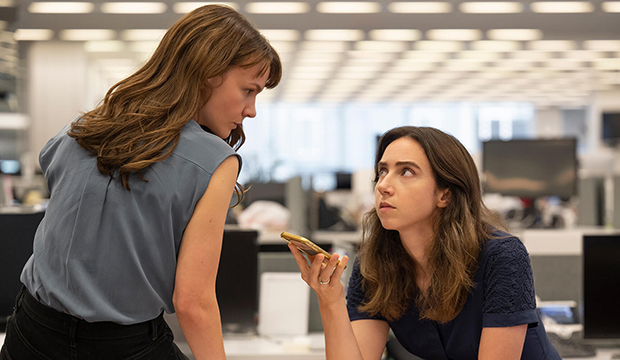 Ever since I had the pleasure of seeing the film “She Said” in October, I find that I’ve been something of a one-man band extolling its Oscar virtues. And it’s been puzzling. No one seems to think it has a prayer of breaking through to the land of Academy Awards nomination on January 24 – as a film, for its direction, for its acting – and I’ve wondered why. My theory is that it has nothing to do with its quality, which is stellar. In telling the story of how two incredibly enterprising New York Times reporters (Jodi Kantor, played by Zoe Kazan, and Megan Twohey, portrayed by Carey Mulligan) helped take down Harvey Weinstein and inspire the launch of the #MeToo movement, “She Said” is every bit as good as “Spotlight,” a similarly-themed biographical drama that won Academy Awards for Best Picture and Original Screenplay in 2016 – a mere seven years ago.

And maybe that’s part of the issue here. The driving narrative of “She Said” is nearly identical to the crusading investigative spirit of “Spotlight,” which depicted the Boston Globe’s exposing of widespread and systemic child sex abuse by numerous Roman Catholic priests in the Boston area. It earned those reporters a Pulitzer Prize, just as it did Kantor and Twohey. In depicting the dogged efforts of the two NYT reporters, sourced from a book written by the reporters, “She Said” stands as a powerful ode to journalistic tenacity and ethics,  shining a (yes) spotlight on the grunt work that leads to exposing corruption and influencing change. It grabs you by the throat and never lets go. At the same time, the movie is neither overly melodramatic nor self-congratulatory, instead using measured restraint in telling its compelling true-life story. The performances by Kazan and Mulligan are explosive, dramatic and exceptional, the direction from Maria Schrader spare and intense.

So then, what’s the problem? Why is “She Said” mired in 16th place between “The Whale” and “Aftersun” among likely Best Picture nominees in the Gold Derby combined odds at 100/1? Why is Schrader far back in 25th place on Gold Derby among potential Best Director nominees?  And it would be a surprise at this point if either of the principal performers (Kazan entered as lead, Mulligan as supporting) were to crack the nominations list. The one serious shot the film has is for Rebecca Lenkiewicz’s tight adapted screenplay, where it currently stands in third place with 6/1 odds behind Sarah Polley for “Women Talking” and Rian Johnson for “Glass Onion.” Even at that, however, while it’s seen as likely to get nominated for its script, no one in the Gold Derby handicap of editors (except me), experts and top users give it any chance to actually win.

Here are a few additional reasons why I think this is happening:

Anyway, that’s my two cents. I want to see much more love for “She Said,” but I fear only a single non-crafts Oscar nomination will be coming its way. And it deserves so much more. Voters, are you listening?