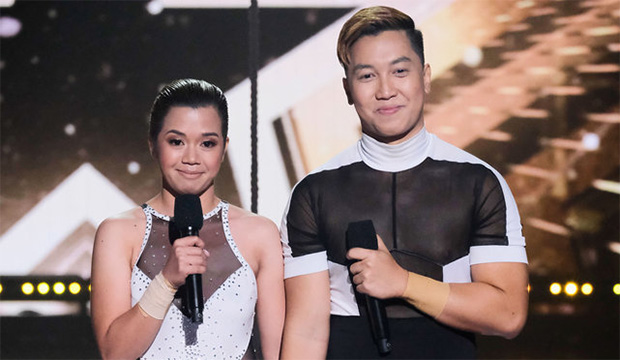 At the end of the fourth episode of “America’s Got Talent: All-Stars,” Simon Cowell appeared gobsmacked when aerialists Power Duo won the superfan vote over chorale group Ndlovu Youth Choir. In fact, the camera only caught the British judge saying two words after Terry Crews made the announcement: “Wow” and “Unbelievable.”

But that’s the way it goes, Simon. Sadly, the superfan voters on “AGT: All-Stars” can only send one act through to the Finals each week and they clearly liked Power Duo the best. The cruel rule means that many other talented acts will unfortunately be sent home in every episode. The married aerialist couple, who won “Philippine’s Got Talent” 2016, beat out Ndlovu Youth Choir (“AGT” Season 14 finalist) in second place and acrobat Darius Mabda (“Romania’s Got Talent” 2022 winner) in third place.

Earlier in the episode, Power Duo performed a dangerous high-flying routine on the big stage that ended with a romantic kiss. All three “AGT” judges had stars in their eyes as they applauded the couple. “I love you two,” Simon proclaimed.

Howie Mandel agreed, noting, “I did love it. I loved that it was a combination of being acrobats, dancers and aerialists.” However, Howie followed up his praise by critiquing the couple for making “a mistake” during the performance when the husband threw a rope that his wife missed.

“You saw [the mistake], we all saw it, it doesn’t matter because you guys are great,” Heidi Klum interjected. “And it is so beautiful to watch two people that are in love and then do something so beautiful together. It was beautiful to watch.” Heidi later revealed she “loved” Power Duo but that it was “too early” in the evening to push her Golden Buzzer.