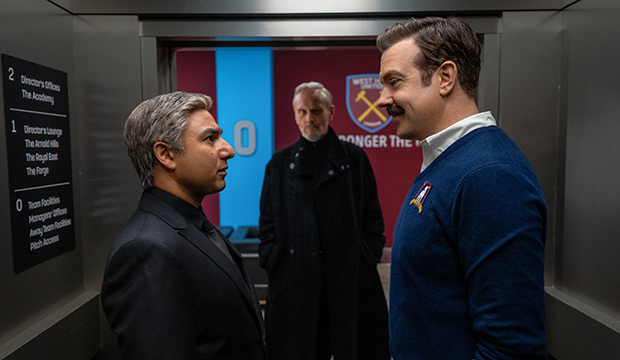 After more than a year off the air, “Ted Lasso” will return with Season 3 in the spring, Apple TV+ announced Wednesday at the Television Critics Association winter press tour. An exact date was not revealed.

However, to tide you over, the streamer did share a first look photo at the long-awaited third season. It features Ted (Jason Sudeikis) and Nate (Nick Mohammed) having a staring contest coming face to face in an elevator in what is probably one of their first meetings since their blowup in the Season 2 finale and the latter went full villain, defecting AFC Richmond to coach Rupert’s (Anthony Head) West Ham squad. And Rupert, fittingly, is right in the middle in black. Can’t wait for them to recreate this on the pitch.

This will be the first time that “Ted Lasso” is not airing in the summer. The series premiered in August 2020 and Season 2 launched in July 2021, a week after the show scored 20 Emmy nominations for its breakout first season.

But a spring premiere, especially if it’s in March for a 12-episode season, means “Ted Lasso” will be eligible at the Emmys with the chance to three-peat in Best Comedy Series, something last accomplished by “Veep” (2015-17). The soccer comedy won seven Emmys in 2021 for its inaugural season and added four more statuettes in September for its sophomore installment. In addition to the series title defense, Sudeikis and supporting player Brett Goldstein also went back to back for their performances.

Sudeikis, who co-created the series, has long stated that he has a three-season story in mind for the titular soccer coach. In June, Goldstein, who also serves as a writer on the show, told the Sunday Times that they were writing the third season like it’s the final one. “It was planned as three,” he said. There’s been no official word on whether the show will end with Season 3.