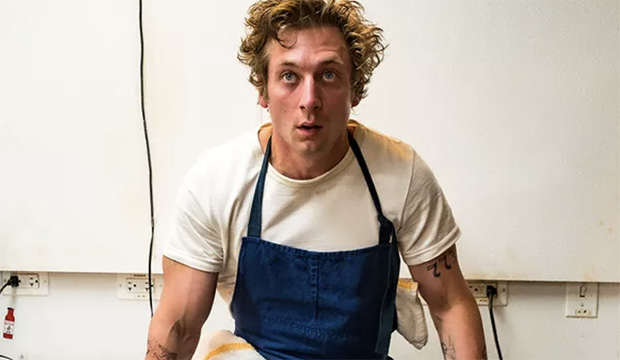 When I saw that both the Golden Globes (coming to a TV set or streaming monitor near you next Tuesday) and the Critics Choice Awards had nominated “The Bear” and its lead actor Jeremy Allen White — and in the case of the Critics Choice, supporting actress Ayo Edebiri, too — in COMEDY categories, I thought maybe there was something wrong with my laugh detector. So I sat my wife down to watch a couple of episodes of the FX on Hulu freshman series about the drama inside a Chicago sandwich shop so we could find the hilarity together. We emerged pleasantly exhausted from the experience of taking in the show’s excitement, intensity and superb performances — but we didn’t laugh once. In point of fact, we didn’t even crack a smile.

“What’s wrong with us?” I asked Jill.

“Nothing,” she replied. “This show is a lot of things, but a comedy isn’t one of them.”

“But how can that be true,” I countered, “when it’s listed here in the ‘comedy or musical’ category for the Globes and straight-on ‘comedy’ for the Critics Choice? Could it be that we’re just too old now to appreciate quality humor? Did we maybe miss the part where the star and his sandwich shop cohorts were singing?”

“No,” she calmly responded. “It’s neither funny nor tuneful. I think it must be them.”

“But when,” I asked plaintively, “has the Golden Globes ever steered us wrong?”

Even as the words were tumbling from my mouth, I understood how ridiculous they were.

Things started to change in the 2010s in terms of the takeover of single-camera, streaming — and irony subbing for laughter. There were a pair of victories for “Glee,” which satisfied the rarely sated Globe appetite for the “musical” part of the category, followed by “Modern Family,” “Girls” and “Brooklyn Nine-Nine.” But then things went all-out dramedy with “Transparent,” “Atlanta,” “The Marvelous Mrs. Maisel,” “The Kominsky Method” and “Fleabag.” However, that quintet were uproarious knee-slappers compared to “The Bear,” which I repeat is a singularly terrific and entertaining show that is utterly miscast as even a quasi-comedy.

SEEJeremy Allen White (‘The Bear’): Chef Carmy is ‘addicted to the possibility of everything falling apart’ [Exclusive Video Interview]

And yet…it’s being taken completely seriously (no pun intended) in the category. It’s tied with “Only Murders in the Building” for second place in the Golden Globes combined count with 4/1 odds, trailing only “Abbott Elementary.” And “The Bear” star Jeremy Allen White has been the wire-to-wire category leader for comedy actor at 16/5 ahead of Steve Martin (a guy who actually is funny). A similar story is being told in the Critics Choice nominations, where again the show is the second choice behind “Abbott Elementary” with 5/1 combined odds while White is the leader among comedy actors at 17/5 and costar Ayo Edebiri is the third choice among comedy supporting actresses at 9/2.

Again, this is not a slam against the quality of “The Bear,” which isn’t in dispute. It’s a superb piece of television. But it’s not a comedy. Seemingly, the primary (only?) criterion for a show’s categorization is its length, which in this case is under 30 minutes. But it’s destined to look pretty weird should White win at either the Globes or Critics Choices for comedy when his performance isn’t even snarky-amusing and seemingly doesn’t try to be. What it and these awards shows desperately need is threefold:

1. Get rid of the “musical” part of the “comedy or musical” equation at the Globes. If a musical surfaces, it can fit into drama or comedy just fine.

2. Create a genre-splitting “dramedy” category for television nominees (including for shows like “Barry” and “Hacks” as well) at both the Golden Globes and Critics Choice competitions. Trust me that it’s long overdue.

3. In a situation like “The Bear” where there is no actual comedy, relegate even shorter-duration dramas to enter as drama series.