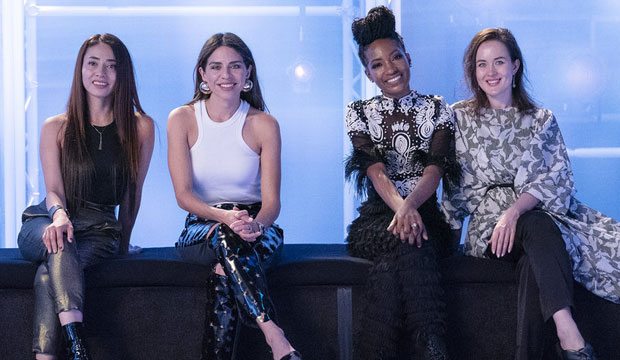 Last time, on the 12th episode of “Project Runway” season 19, fashion editorial icon Coco Rocha served as both guest judge and “model as muse” for the final five designers as they created a look that Coco would wear on a photo shoot of their own vision. Without a runway presentation, the designers were judged live at the photo shoot based on how well they were able to translate their design for editorial purposes. Bones Jones created a gorgeous dress that was ultimately not as effective for print as the others and so he was sent home. Once again, Shantall Lacayo was declared the week’s winner, making it four overall for her on the season.

Below, read our “Project Runway” recap of season 19, episode 13, titled “The Sky Is the Limit,” to find out how the final four managed to impress the judges on Thursday, January 27, with a final look to decide who among them would go on to New York Fashion Week. Then be sure to sound off in the comments section about your favorite designers on Bravo’s reality TV show, who has the best aesthetic, and who you think will ultimately be crowned the next big name in fashion.

After receiving an invitation from Christian Siriano, the designers made their way to a rooftop at Rockefeller Center where they met him and Nina Garcia. Not only are they the final four, but a final four made up of all women for the first time ever. And as Christian pointed out to them, 10 of the season’s 13 challenges were won by them. For their final challenge before New York Fashion Week, Christian and Nina asked them to think “sky high” to create a look that explains why their brand is the next big thing in fashion. The open-ended challenge gave them all the chance to create anything they wanted to show the judges why they deserve to show a full collection in the finale.

With $750 and 30 minutes to shop at Mood, Kristina went to the denim section wanting to do something in streetwear, specifically making a pair of jeans. Christian gave Chasity a hard time for heading straight to black fabric, but she insisted that she’s trying to communicate a message of strength that only black conveys. Shantall went for navy fabric, and when Christian pushed her toward a different palette as well she decided to purchase some white to give her more time to think about which direction she’d take her gender fluid idea. Christian had almost heard enough when he saw Coral picking up nude fabrics and Kristina going for more blues, but he was only able to push Kristina toward a different color. She picked up some reds to add to her idea of creating something resembling the American flag.

When the designers got back to the workroom they were greeted by a duo who would advise them as they considered their brand identities. Sara Kozlowski from the CFDA and publicist Tenique Bernard were there to hear more from the finalists and offer advice about navigating the industry as they look to build their collections. They emphasized the importance of “creating a voice” and showing consistency from collection to collection so that the audience and consumer can always connect back to the brand identity. Throughout the day, Sara and Tenique also met with each of the designers individually on the runway where all of the looks they had created for the season were on display.

With Coral’s work, Sara and Tenique were drawn to the blend of her macramé with modern style and tailoring. They encouraged her to continue to think about color and noted that the monochromatic looks are, from a business perspective, really sellable. They also complimented the way she incorporates her cultural heritage through her style which provides a unique point of view. The wearability and fun that Kristina has with draping is what spoke to them most about her work, as well as her interesting use and mixing of patterns and textures. That being said, they warned her about too much print in collections because they can become challenging and not as easily sold as a brand identity.

Chasity explained that while she loves doing gowns, she’s interested in translating that into wearable streetwear as well. Sara told her to build a network and community in Houston with the fashion council there because it helps inspire and connect designers with opportunities and people to dress. They told Shantall the key to her success is editing and thinking about who she wants to dress and finding her own signature within that. They loved the elegance of a lot of the pieces she created and responded to the structure and tailoring.

During final check-ins, Christian advised Coral against spending time creating a jacket that would cover up the gorgeous macramé dress that she had already begun. He wanted her to instead focus on the dress and responded well to her giving it the “ethnic feel” that she was going for. In Chasity’s look, he liked that it wasn’t perfect and said that she was pushing herself in a direction she hadn’t yet gone. When Kristina brought up the idea of doing a criss cross tie around the waist again, Christian said absolutely not and strongly suggested that she not do something she’s already shown the judges. He was impressed with how ambitious Shantall was getting with her suit with cut-outs, and not so impressed with the fact that she was still making patterns for it with the clock ticking.

The next day on the runway, Nina was joined by Brandon Maxwell, Elaine Welteroth and guest judge (and past “Runway” host) Karlie Kloss. After seeing all four looks walk, the judges spoke to each of the designers to discuss their work and decide which three should advance to NYFW. Kristina spoke to her vision of elevating streetwear by making her garments work in multiple situations. The judges were impressed by how much she was able to create in a short amount of time, and Karlie thought it was conceptual as well as commercial. Nina called the versatility of her looks a “superpower,” but Elaine thought a drawback was that it could be too complicated for consumers and was also repetitive of what they’ve seen her do already. Coral said that her vision is about showing her culture and making it high fashion, and that’s exactly what the judges felt was her mark as an artist. Nina liked the play between “delicate and edgy,” seeing her craftsmanship in everything that she does.

Brandon called Chasity’s look beautifully done, but thinks she could have edited it a little bit. Elaine called it a classic gown, but agreed that there was something dated in the sleeves and collar and called black fabric a safe choice. She stressed that this was Chasity’s chance to make an impression, but that she didn’t clearly show how her point of view is a step into the future. With Shantall’s suit, Brandon acknowledged how ambitious she was considering how little time they had and that made him excited for what she’d be able to create with more time. Elaine appreciated and was excited that Shantall centered the non-binary body and gender fluidity fashion from conception and Nina said her confidence comes through in her clothes.

This time the judges did not need more time to deliberate privately. Instead, Brandon went to the other judges and quietly conferred for a few moments before announcing that all four of the women would advance to New York Fashion Week! Elaine said that there is something special and unique in each of their designs that makes them all deserving of producing a collection.

Before sending them on their way, Brandon told Shantall that they have a big question on what is her signature and what is her aesthetic. Nina told Chasity that she’s talented in making memorable evening wear, but she wants to see the stuff she designs for herself because they love that, too. Elaine challenged Kristina to show something they haven’t seen from her yet, outside of modular clothes. Nina expressed to Coral that they love all of the macramé and cultural work she’s created and encouraged her to continue to dig deep.

NEXT TIME: The finalists have $10,000 and five months to create a 10 piece collection to show at New York Fashion Week.