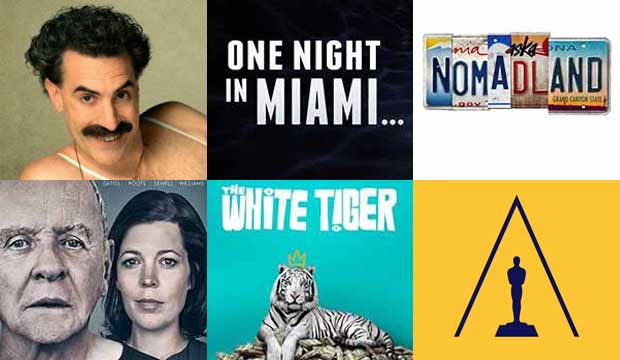 Since the first ceremony, Oscar voters have honored the importance of the first step in the filmmaking process by awarding screenwriters on an annual basis. The Best Adapted Screenplay award is given in recognition of each year’s most outstanding script derived from an existing work. Academy rules allow for a variety of source materials, including fiction and nonfiction books, plays, and even previous short and feature films.

In adapting his play “The Father” from stage to screen, Florian Zeller teamed with Christopher Hampton, who previously won this award in 1989 for “Dangerous Liaisons.” Hampton is now one of 22 writers with at least three nominations in this category, having also earned one for “Atonement” in 2008. A second win would make him the 10th person to triumph here twice. He would also set a new category record for the longest period of time between wins, which is currently only seven years and held by George Seaton (“Miracle on 34th Street,” 1948 and “The Country Girl,” 1955).

Also returning to this category after over a decade are four of the “Borat Subsequent Moviefilm” writers. Sacha Baron Cohen, Peter Baynham, Anthony Hines, and Dan Mazer were all previously nominated in 2007 for writing the first “Borat” film, which fleshed out the titular character after his origination on British television. The sequel has a total of nine credited writers, which is a record high amount for a single film in either writing category.

The 2021 lineup’s total of 14 individual writers ties the record set by the 2007 group, which included five writers each from “Borat” and “Children of Men.” Baron Cohen follows George Clooney (“The Ides of March” and “The Descendants,” 2012) as the second person to receive nominations here and in an acting category for different films during the same year. He is also in the running for Best Supporting Actor for his work in “The Trial of the Chicago 7.”

Kemp Powers (“One Night in Miami”) is the 13th Black writer to ever compete for this prize and would be the fifth to win. Including Powers, only four Black writers (all playwrights) have earned recognition for adapting their own work. Charles Fuller (“A Soldier’s Story,” 1985) was the first, followed in 2017 by winner Tarrell Alvin McCraney (“Moonlight”) and the late August Wilson (“Fences”).

Either Chloé Zhao (“Nomadland”) or the trio of women who contributed to “Borat Subsequent Moviefilm” (Jena Friedman, Nina Pedrad, and Erica Rivinoja) could become the first female winner(s) in this category since Diana Ossana (“Brokeback Mountain”) in 2006. The only other women to ever prevail here are Sarah Y. Mason (“Little Women,” 1934), Claudine West (“Mrs. Miniver,” 1943), Ruth Prawer Jhabvala (“A Room with a View,” 1986 and “Howards End,” 1993), Emma Thompson (“Sense and Sensibility,” 1996), and Philippa Boyens and Fran Walsh (“The Lord of the Rings: The Return of the King,” 2004). Zhao is also contending in three other categories for her work on “Nomadland”: Best Picture, Best Director, and Best Film Editing.