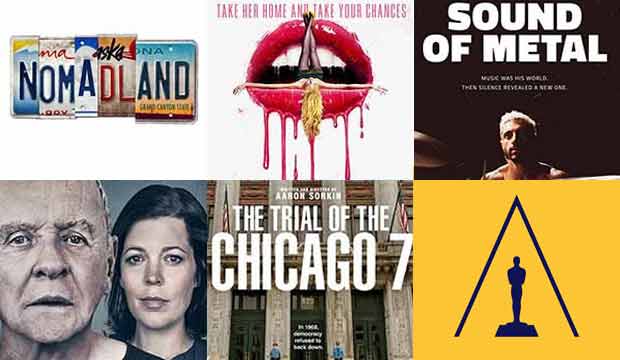 Of the five individuals in this year’s lineup, only Baumgarten has been nominated before. He, Jay Cassidy, and Crispin Struthers were collectively recognized for “American Hustle” in 2014 but lost to Alfonso Cuarón and Mark Sanger (“Gravity”).

Any one of the newcomers could become the fifth cutter in eight years to prevail on their first outing. Sanger was the first, followed by Margaret Sixel (“Mad Max: Fury Road,” 2016), John Ottman (“Bohemian Rhapsody,” 2019), and Andrew Buckland (“Ford v Ferrari,” 2020).

“Nomadland” editor Chloé Zhao is also in contention for three other awards this year: Best Picture, Best Director, and Best Adapted Screenplay. She could follow Edith Head (1951), Catherine Martin (2002 and 2014), Fran Walsh (2004), and Kathryn Bigelow (2010) as the fifth woman to win multiple Oscars in a single night. As of now, Walsh stands above the rest, having won Best Picture, Best Adapted Screenplay, and Best Original Song for “The Lord of the Rings: The Return of the King.” If Zhao surpasses her, she will tie the record of four wins in one year that Walt Disney set in 1954.

Zhao, who has already made history as the first Asian woman to compete for this award, could become the 14th woman to win it overall. The only three who have triumphed in the last three decades are Thelma Schoonmaker (“The Aviator,” 2005 and “The Departed,” 2007), Chris Innis (“The Hurt Locker,” 2010), and Sixel.