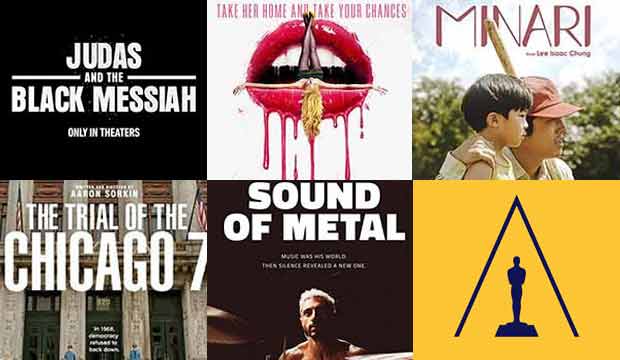 Beginning with the 13th Academy Awards ceremony in 1941, the Best Original Screenplay prize has been given in honor of each year’s most outstanding script written directly for the screen. The category was originally created to draw a distinction between the work of these writers and those who adapt existing works. The latter type is recognized in the Best Adapted Screenplay category.

For the first time in 19 years, every individual writer included in the current lineup is new to the category. Aaron Sorkin, who penned “The Trial of the Chicago 7” on his own, is the only one of the 10 to have ever been recognized by the academy at all. He scored a Best Adapted Screenplay win for “The Social Network” in 2011 before garnering two additional bids in that category for “Moneyball” (2012) and “Molly’s Game” (2018).

This year marks the very first time that all five Best Original Screenplay-nominated films are also in the running for Best Picture. Including “Mank,” six of the eight films contending for the top honor derive from original scripts. Appearing in both lineups are writer-producers Emerald Fennell (“Promising Young Woman”) and Shaka King (“Judas and the Black Messiah”). Fennell is also up for Best Director, as is Lee Isaac Chung, the writer of “Minari.”

Chung is the ninth person of Asian descent to earn a nomination in this category and the fourth to hold sole writing credit after Hanif Kureishi (“My Beautiful Laundrette,” 1987), M. Night Shyamalan (“The Sixth Sense,” 2000) and Asghar Farhadi (“A Separation,” 2012). A victory would make him the third Asian winner of either writing award following Bong Joon Ho and Jin-won Han, who jointly triumphed for “Parasite” last year.

King and his co-writers, Keith Lucas and Kenny Lucas, have brought the total number of Black nominees in this category from four to seven. King is the fourth of the seven to have also directed his film, after Spike Lee (“Do the Right Thing,” 1990), John Singleton (“Boyz n the Hood,” 1992), and Jordan Peele (“Get Out,” 2018). Peele remains the only Black Best Original Screenplay winner.

Although many women have been recognized in this category, only 18 have earned bids as the sole writers of their screenplays. Fennell and Greta Gerwig (“Lady Bird,” 2018) are the only ones to achieve the feat over the last 10 years. If Fennell triumphs, she will be the fifth such winner of the award after Callie Khouri (“Thelma & Louise,” 1992), Jane Campion (“The Piano,” 1994), Sofia Coppola (“Lost in Translation,” 2004), and Diablo Cody (“Juno,” 2008).