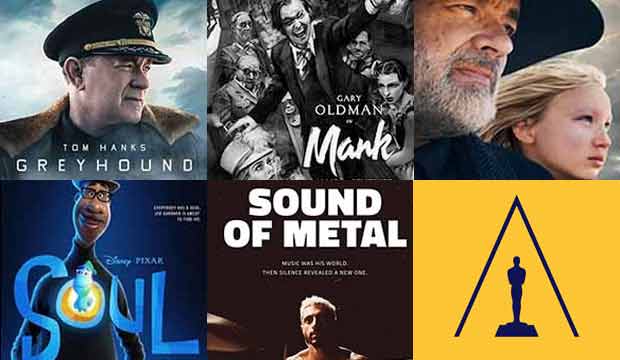 The individuals included in the current lineup have amassed a total of 34 nominations for their sound work in 30 films. “Sound of Metal” is the only film of the five that does not include any previous Oscar nominees on its sound team. Its first-time contenders are: Jaime Baksht, Nicolas Becker, Philip Bladh, Carlos Cortés and Michelle Couttolenc.

“Sound of Metal” and “Mank” now hold the distinction of being the first films recognized in a sound category with five credited team members each.

This year, Michael Minkler (“Greyhound”) celebrates his lucky 13th bid over four decades after receiving his first for “The Electric Horseman” (1980). Only 11 others have earned as many or more sound nominations. He has collected three Oscars for “Black Hawk Down” (2002), “Chicago” (2003), and “Dreamgirls” (2006) and competed just last year with “Once Upon a Time in Hollywood.” He shares this bid with Beau Borders, who was previously nominated for his work in “Lone Survivor” (2014), and first-time contenders Warren Shaw and David Wyman.

Of the four members of the “News of the World” team, three are past nominees (William Miller is the rookie) and two have competed together before. John Pritchett’s first bid came in 2003 for “Road to Perdition” and was followed by a second for “Memoirs of a Geisha” in 2006. Mike Prestwood Smith and Oliver Tarney earned notices in 2014 for their respective sound mixing and editing work in another Paul Greengrass film, “Captain Phillips.” Tarney later garnered bids for “The Martian” (2016) and “1917” (2020).

Ren Klyce and David Parker are both dual nominees this year for their work in “Mank” and “Soul.” “Mank” is the fourth David Fincher film for which they have both been recognized after “The Curious Case of Benjamin Button” (2009), “The Social Network” (2011), and “The Girl with the Dragon Tattoo” (2012). They also competed as a pair in 2018 with “Star Wars: The Last Jedi.” Parker has won Oscars for his work in “The English Patient” (1997) and “The Bourne Ultimatum” (2008).

Also included in the “Mank” group is Drew Kunin, who is a past nominee for “Life of Pi” (2013) and “Bridge of Spies” (2016) and rookies Jeremy Molod and Nathan Nance. First-time nominee Coya Elliot rounds out the “Soul” team.