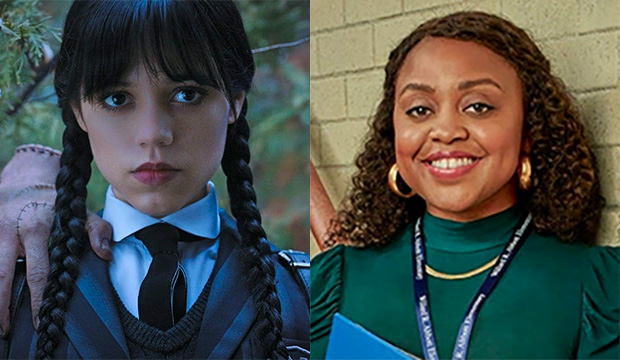 The 2023 Golden Globes nominations were announced on December 12 in film and television, as voted on by members of the Hollywood Foreign Press Association. Who will prevail in the category of Best Comedy Actress during NBC’s ceremony on Tuesday, January 10? This year’s five nominees are: Quinta Brunson (“Abbott Elementary”), Kaley Cuoco (“The Flight Attendant”), Selena Gomez (“Only Murders in the Building”), Jenna Ortega (“Wednesday”) and Jean Smart (“Hacks”).

Scroll down to see Gold Derby’s 2023 Golden Globes TV Predictions for Best Comedy Actress, listed in order of their racetrack odds. Our Golden Globe odds are based on the combined forecasts of thousands of readers, including Experts we’ve polled from major media outlets, Editors who cover awards year-round for this website, Top 24 Users who did the best predicting the winners last time, All-Star Users who had the best prediction scores over the last two years, and the mass of Users who make up our biggest predictions bloc.

3. Jean Smart (“Hacks”) — 4/1 odds
This awards magnet stars as an aging Las Vegas comedian, Deborah Vance, who struggles with having a young new writer by her side, Ava Daniels (Hannah Einbinder). The HBO Max show claimed two Globes last year — comedy series and lead actress — and now Smart is hoping to become the first woman to repeat in this category since Rachel Brosnahan (“The Marvelous Mrs. Maisel”) in 2017 and ’18.
Experts predicting: None

4. Selena Gomez (“Only Murders in the Building”) — 9/2 odds
The second season of Hulu’s whodunnit mystery welcomes back Gomez as Mabel Mora alongside Steve Martin as Charles-Haden Savage and Martin Short as Oliver Putnam. This time around, the unlikely podcasting trio puts their heads together to try to figure out who killed their board president, Bunny Folger (Jayne Houdyshell), while Mabel explores a new relationship with Alice (Cara Delevingne).
Experts predicting: None

5. Kaley Cuoco (“The Flight Attendant”) — 9/2 odds
Cuoco enjoys her second nomination for the HBO Max dramedy, in which she takes on the role of Cassie Bowden, an alcoholic flight attendant who inexplicably gets recruited by the CIA. In Season 2, the character begins to have visions where she’s interacting with different versions of herself, which gives Cuoco plenty of moments to shine and show off her impressive acting abilities.
Experts predicting: None