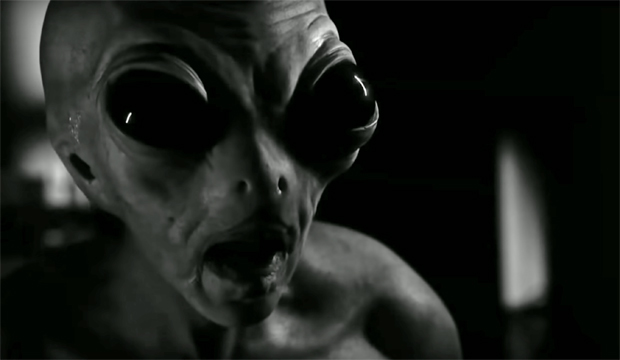 Ever since aliens first popped up on “American Horror Story” in 2012’s “Asylum,” fans have been dying to learn more about the little grey men. But they had to wait almost a decade to see the otherworldly creatures return, thanks to 2021’s “Double Feature” Part 2, titled “Death Valley.” If you’re having trouble remembering what’s up with the non-humanoids, you’ve come to the right place. Read on for everything to know about the “American Horror Story” aliens explained.

The extraterrestrials are first mentioned in the “American Horror Story” universe when they abduct and experiment on Kit Walker (Evan Peters) and his wife Alma (Britne Oldford) in the 1960s. Kit is returned to Earth in a wooded area that just so happens to be the site of Bloody Face’s (Zachary Quinto) many murders, so Kit is tried and convicted of being a serial killer. After Kit starts yapping about aliens, he is sentenced to Briarcliff Manor. The asylum’s creepy doctor, Arthur Arden (James Cromwell), later removes a spider-like piece of alien technology from Kit’s neck. This triggers the creatures to be interested in the asylum, and a drunk Sister Jude (Jessica Lange) soon sees an alien-like figure roaming the halls.

When Dr. Arden is performing surgery on another patient, Grace Bertrand (Lizzie Brochere), the aliens show up unexpectedly and abduct her. In order to get her back, he devises a scenario where he temporarily kills Kit so that the aliens will return. The plan works, with a bright light shining outside his office signaling Grace’s return … only she’s pregnant. Another abducted inmate, Pepper (Naomi Grossman), explains the ETs have the ability to control humans’ minds and bodies. She is proven right when Dr. Arden tries to cut into Grace’s stomach and his scalpel flies across the room.

Grace delivers her baby, which luckily appears to be human. She believes Kit to be the father and that their baby will have special powers thanks to the aliens’ influences. When Kit eventually leaves the asylum, his first wife Alma is returned to earth and she is also now with child. Soon after his 40th birthday, Kit’s friends assume he dies of pancreatic cancer, but in reality he is abducted for the final time and never seen again. Producers Ryan Murphy and Tim Minear likened these “Asylum” extraterrestrials to being “an obvious metaphor for God” and “the closest things to angels,” respectively.

Much of the “Asylum” storyline took place during the 1960s, around the same time frame the visitors were working with President Dwight D. Eisenhower (Neal McDonough) to create alien-human hybrids in “Double Feature.” Eisenhower becomes involved in the conspiracy after a UFO is shot down by the Air Force in Palm Springs, California. That leads him to discover none other than Amelia Earhart (Lily Rabe), who originally went missing in 1937. The aviation pioneer is now pregnant and has strange markings on her back, but she freaks out when the doctors suggest she may have been abducted. Amelia’s baby later rips out of her body, killing her instantly.

The scientists acquire a non-human body from the wreckage that is grey and smooth and has big black eyes. However, when they perform an autopsy, they discover it’s just a shell and the actual alien is hiding within — it’s a strange blob shape that attaches to their faces and explodes their heads. Just like in “Asylum,” the “Death Valley” aliens have the ability to control humans. However, it’s much more obvious now as they make peoples’ eyes turn white and their bodies float off the ground. One person they control is Mamie Eisenhower (Sarah Paulson), who tells her husband that he must work with the aliens. The goal, she believes, is to acquire their advanced technology, including microwaves, in the hopes of saving Earth.

Decades later in the present day, four college students are all abducted and returned to Earth pregnant — two women, two men. This marks the first time in “AHS” history that men are seen to be pregnant, suggesting the aliens have found a way to make the unthinkable happen in the years since Kit was first abducted. When it’s time to give birth, the four characters are abducted and placed in Area 51. They meet a hybrid named Theta (Angelica Ross), who reveals the alien planet — not Earth — is the one that will be saved by the new species.

In the “Double Feature” finale, the aliens finally, after decades of research, create the perfect alien-human hybrid. They decapitate the host, Kendall Carr (Kaia Gerber), and then replace her head with a large silver orb so they can use her body to create countless more hybrids. A still-alive Mamie tries to stop them, but she is killed by Theta. Thus, it’s presumed the aliens now have all they need to take over the planet. Another race of reptile-like extraterrestrials are mentioned in this season, but little is known about their existence.