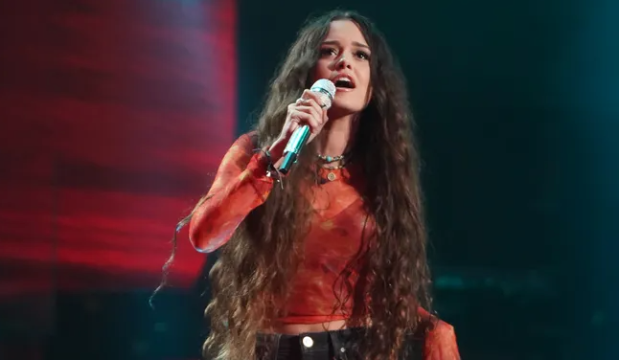 The shock departure of Caleb Kennedy from “American Idol,” leaves just four artists — Chayce Beckham, Casey Bishop, Grace Kinstler and Willie Spence — still in contention to win season 19. These Top 4 will sing three songs each on Sunday’s show a song inspired by their personal idol, a duet produced by mentor Finneas, and their winner’s singles.

Heading into the May 16 two-hour episode, which will air live nationwide, we are surveying “American Idol” viewers for their season 19 winner predictions. Caleb had been polling at about 10%. Without him in the race, Casey has widened her lead and now registers at a whopping 40% of the vote in our poll. Willie sits in second at 28% while Grace has 20%. Rounding out the race is Chayce with 12%.

The last time this quartet performed was on May 9, when they did two songs each: one from the Coldplay catalog and the other in tribute to Mother’s Day. Casey nailed her covers of the Coldplay hit “Paradise” and Alanis Morissette‘s signature tune “Ironic.” Willie did well when he went with “Yellow” by Coldplay and “You Are So Beautiful” by Joe Cocker. Grace, who had been the frontrunner earlier this season, struggled with her versions of “Fix You” (Coldplay) and “When We Were Young” (Adele). Chayce, who sang Coldplay’s “Magic,” opted to perform a original song in tribute to his mama.

Scroll through the photo gallery below to find out more about the Top 4 (and the rest of the season 19 contestants) and then sound off in the comments section as to your choice for the “American Idol” season 19 winner.