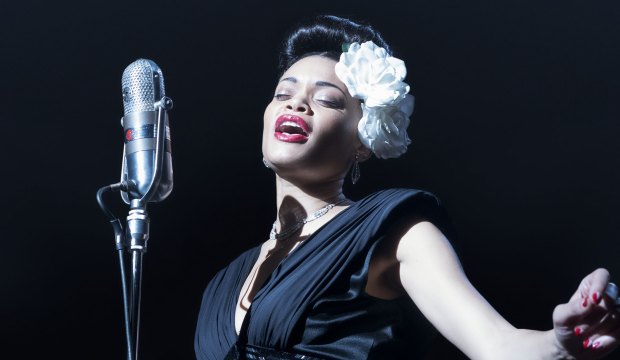 Diana Ross made her indelible film debut as the legendary Billie Holiday in 1972’s “Lady Sings the Blues,” earning both Globe and Oscar nominations for her performance and winning the newcomer award from the HFPA. Nearly 50 years later, Grammy-nominated singer Andra Day is making her film debut as Lady Day in Lee Daniel’s “The United States vs. Billie Holiday,” which Hulu starts streaming on Feb. 12. Just as Ross, Day has earned a Golden Globe bid for Best Drama Actress and is considered a strong contender for a Best Actress Oscar nomination. (Ironically Ross’ son Evan plays a federal agent in this new movie.)

The film revolves around the federal government’s efforts to stop Holiday from singing “Strange Fruit,” the landmark song she introduced in 1939 which dealt with lynching in the South:

Federal Bureau of Narcotics commissioner and unabashed racist Harry Anslinger (Garrett Hedlund) becomes obsessed with Holiday. Besides forbidding her to sing the song, he also saw her as a way to crack down on drug use among the Black community. Holiday was a well-known heroin user and Anslinger used a Black undercover agent Jimmy Fletcher (Trevante Rhodes) to infiltrate her inner circle and bust her. Anslinger was still obsessed with Holiday in 1959 when she was dying at the age of 44 from heart and lung issues as well as cirrhosis of the liver due to her drug and alcohol abuse. When she was in the hospital, Anslinger’s men handcuffed her to the bed.

Recently, Daniels, Day and Rhodes reunited for a Zoom interview about the movie, which marks the filmmaker’s first feature since 2013’s “The Butler.” “It seems like forever,” said Daniels, who moved to TV to do the acclaimed 2015-2020 Fox series “Empire.” “You get caught up in TV and you think, ‘Oh God, I’m a filmmaker.’” “The Butler,” which starred Forrest Whitaker as the White House butler who served eight presidents, was about hope, offered Daniels. “Obama was in the White House and we’d never seen it before.”

Besides paying homage to the iconic Holiday, the film is “really about a call to arms. We are at the place right now. America is at that place right now. I could feel it in the air two years back.” Daniels said he thought of his grandfather, who hailed from Durham, North Carolina, when he first heard “Strange Fruit” in his 20s. “I was trying to feel like it was like for my grandfather,” he explained. “I was trying to put myself in his shoes and how he interacted with white men and the fear he must have had of being lynched for doing nothing-just existing.” (In 1937, the U.S. Senate considered a bill outlawing lynching; it did not pass.)

The director doesn’t describe “Billie Holiday” as a biopic. “This is a hard-core look at the life of a black woman,” he said. “It’s a slice of life. It’s a moment in time of this woman’s quest for standing up for her country. I think she kicked off the civil rights movement as we know it to be.”

Holiday, noted Day, was targeted by the government for 20 years to “make an enemy out of her. It was targeted to get her in prison, targeted to kill her ultimately. To kill her message and to kill any sort of hint of really Black independence and self-sufficiency and freedom. For me, she was really one of the biggest pillars of that-the fact that she was living her life loud. She was living in her freedom and living in her truth.”

In 1999, Time named “Strange Fruit” the Song of the Century