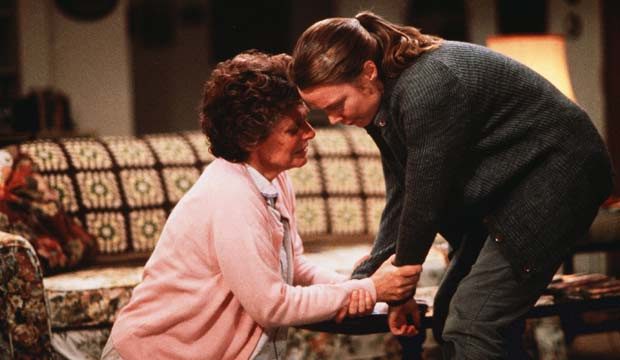 Anne Bancroft would’ve celebrated her 87th birthday on September 17. Born in 1931, the actress had a celebrated career on both the stage and screen, becoming one of the few people to win the trifecta of performance awards (the Oscar, the Emmy, and the Tony). In honor of her birthday, let’s take a look back at 12 of her greatest films, ranked worst to best.

Bancroft made her Broadway debut in William Gibson‘s “Two for the Seesaw,” directed by Arthur Penn. The role brought her a Tony as Best Featured Actress in a play (1958). The very next year, she re-teamed with Gibson and Penn for “The Miracle Worker,” for which she won a second Tony (Best Actress in a Play in 1959).

Following the stage success, Bancroft, Penn and Gibson adapted “The Miracle Worker” to the big screen in 1962. Recreating the role of Annie Sullivan, a teacher struggling to help the deaf and blind Helen Keller (Patty Duke) learn to communicate, won Bancroft the Oscar as Best Actress.

Though portraying Annie Sullivan brought her awards glory, Bancroft is best remembered for her iconic role as Mrs. Robinson, a middle-aged woman who begins an affair with a college student (Dustin Hoffman), in “The Graduate” (1967). The film caused a stir for its frank portrayal of sexuality and generational anxiety, serving as an initiation, along with “Bonnie and Clyde” (1967), into the New Hollywood.

Bancroft’s marriage to comedic director and EGOT champ Mel Brooks lasted from 1964 until her death in 2005. She made multiple cameo appearances in his films, including “Blazing Saddles” (1974) and “Silent Movie” (1976). The two appeared onscreen together in the riotous “To Be or Not to Be” (1983), playing a Polish husband-and-wife acting duo in the lead-up to WWII.

Take a tour through our photo gallery of Bancroft’s 12 greatest films, featuring some Oscar-caliber performances.

12. ‘NIGHT, MOTHER (1986)
Unfortunately, the electrifying performances by Bancroft and Sissy Spacek aren’t enough to break this drama free of its stage roots. Based on the controversial play by Marsha Norman, the film stars Spacek as a depressed, epileptic woman who has decided to commit suicide. Her mother (Golden Globe nominee Bancroft) spends the evening trying to convince her that life is worth living.

10. AGNES OF GOD (1985)
Bancroft reaped her fifth and final Best Actress Oscar nomination for Norman Jewison’s engrossing and perplexing mystery. When a newborn is found murdered in a convent, a simple and naive nun (Supporting Actress nominee Meg Tilly) is suspected of killing her own child. A court appointed psychiatrist (Jane Fonda) arrives to uncover the truth, and is met with resistance by the bullish mother superior (Bancroft).

9. G.I. JANE (1997)
In Ridley Scott’s “G.I. Jane,” Bancroft plays a U.S. Senator who wants to prove that a woman can hold her own in the Navy SEAL training program, a boot camp so rigorous few men make it past day one. But Lt. Jordan O’Neil (Demi Moore) just might be able to do it. The film takes a sharp and baffling left turn when it’s revealed the senator has ulterior motives.

8. THE SLENDER THREAD (1965)
Sydney Pollack’s feature directorial debut stars Bancroft as a woman who takes a lethal dose of sleeping pills, then calls a crisis hotline to talk with someone before she dies. She gets in touch with a student volunteer (Sydney Poitier) who tries to keep her on the line long enough to track her down and organize a rescue. Pollack creates as much suspense as one can with two people talking on a telephone, aided by capable performances from Bancroft and Poitier.

7. TORCH SONG TRILOGY (1988)
Bancroft received top billing in this heavily rewritten and truncated adaptation of Harvey Fierstein’s landmark play. Fierstein reprises his Tony Award-winning role as Arnold, a drag queen who faces trials and tribulations throughout his lifetime, all with dignity and a few witty one-liners. The standout sequence is a final, painful confrontation between Arnold and his domineering, emotionally-volatile mother (Bancroft), in which he lays out his feelings about his sexuality and her attitude towards it.

6. THE PUMPKIN EATER (1964)
Jack Clayton’s oddball domestic drama, written by Harold Pinter, features Bancroft as an unusually fertile woman on her third husband (Peter Finch), a fledgling screenwriter. When his success leads to infidelity with other women, his wife is left at home to tend to her eight children, leading to a nervous breakdown. Bancroft carries the overlong film on her capable shoulders, particularly when she’s wandering the streets of London searching for a good listener.

5. THE TURNING POINT (1977)
“The Turning Point” finds Bancroft and Shirley MacLaine squaring off in one of the all-time great diva showdowns. It centers on two ballerinas who reconnect after several years, one (Bancroft) a world-renowned dancer, the other (MacLaine) a housewife who gave up her promising career. When MacLaine’s daughter (Leslie Browne) wants to join a ballet company, it sets off an epic catfight.

4. THE ELEPHANT MAN (1980)
Bancroft has a small but memorable role in David Lynch’s haunting biopic (produced by her husband, Mel Brooks). John Hurt stars as the horribly disfigured John Merrick, cruelly referred to as “The Elephant Man.” He’s rescued from a sideshow by a sympathetic surgeon (Anthony Hopkins) who brings out the intelligence and humanity beneath his horrifying appearance. Bancroft plays Madge Kendal, a renowned stage actress who strikes up a friendship with Merrick.

3. TO BE OR NOT TO BE (1983)
Bancroft often made cameo appearances in films directed by her husband, Mel Brooks. In “To Be or Not to Be,” the two pair up for a highly entertaining remake of the Ernst Lubitsch classic (produced by Brooks and helmed by Alan Johnson). They star as a Polish husband-and-wife acting duo who become entangled in a dangerous spy operation in the lead-up to WWII.

2. THE MIRACLE WORKER (1962)
“The Miracle Worker” brought Bancroft some serious awards hardware. After winning the Tony for the acclaimed stage version, she snagged Best Actress at the Oscars for the equally-lauded film adaptation. It tells the true story of Annie Sullivan (Bancroft), a teacher struggling to help the deaf and blind Helen Keller (Supporting Actress winner Patty Duke) learn to communicate.

1. THE GRADUATE (1967)
Here’s to you, Mrs. Robinson. The highlight of Bancroft’s career is Mike Nichols’ countercultural sex comedy about a disillusioned college student (Dustin Hoffman) who begins an affair with a middle-aged woman (Bancroft), only to fall in love with her daughter (Katharine Ross). When it was released in 1967, “The Graduate” was seen as the ultimate love song to a generation bucking the ideals and materialism of their parents. Yet the true rebel is Mrs. Robinson, an intelligent, worldly woman desperately trying to break free from the monotony of her life.