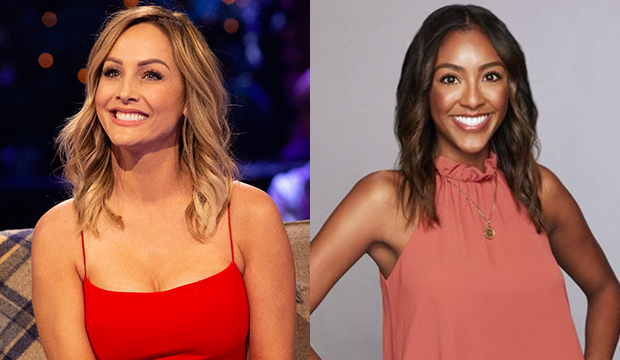 Oh, boy, this really is going to be the most dramatic season yet of “The Bachelorette.” Just two weeks into filming Season 16 — after a four-month delay due to COVID-19 — Clare Crawley is no longer the lead and has been replaced by “Bachelor” Season 23 alum Tayshia Adams. And in a franchise first, both of them will be part of the season when it premieres in the fall. Guess after all this waiting we deserve two Bachelorettes?

ABC has not announced the shakeup —  and it’s not expected to before the premiere — but multiple reports have confirmed the twist, and there’s lots of evidence backing it up. And then there was ABC’s purposely vague promo on Monday night that literally kept the Bachelorette’s face in the dark (you can tell it’s Crawley, though, because Adams also probably hasn’t had time to film one).

So how did it all go down? Here’s what you need to know about the crazy switch.

Crawley fell hard for one of her guys
That guy is Dale Moss, a former NFL player and one of the guys in the original cast of 32 that was announced in March. He ended up being one of the 17 who survived the recast. “Life & Style” reported on July 30 that Crawley wanted to quit after getting enamored with Moss, whom Reality Steve confirmed got the first impression rose after production started on July 17. A Reddit user posted that Crawley didn’t show up for scheduled filming.

Crawley and Moss may have already been in contact before production began
A source told “People” that “one of her guys” — aka Moss — “found a way to get in touch with her and they began talking” during lockdown. So once filming started, they “basically already in love” and “no one stood a chance.” If this is true, the irony is that Crawley had seemingly subtweeted Matt James, one of her OG suitors who is now the first Black Bachelor, in April about capitalizing on his casting and doing interviews and Cameos (he was doing them for his charity).

Adams was cast and the rejected men were contacted to return
At some point, producers let Crawley and Moss go on their merry way, and then cast Adams, who headed to La Quinta Resort & Spa in La Quinta, California, where the whole season is being filmed, to quarantine. Adams’ last social media post was on Instagram on July 30 and features emoji comments from producer Julie LaPlaca, aka the producer people thought Peter Weber was dating, and the official Bachelor Nation account.

On July 31, “Us Weekly” reported that producers had asked the men who were rejected before production began to return within 24 hours, and that it was, per a source, “very apparent that something had happened with production.” At the time, Reality Steve reported that none of those men had said yes.

“Tayshia was game and ready to go,” “People’s” source said. “What remains to be seen is if more men will be brought in now to give Tayshia a full roster of suitors.”

Crawley’s (accidental?) “like” and Adams’ dead phone
On Aug. 2, as rumors swirled over the weekend, Crawley appeared to return to social media and liked a tweet from a fan expressing excitement over the possibility of Adams being the Bachelorette. The tweet was un-liked the next morning. On the flip side, “Bachelor” alum Demi Burnett told Reality Steve during an Instagram Live that her texts to Adams have been going through as green, indicating that her phone was turned off, which means producers have already confiscated it. “Oh, she’s there then,” Steve said.

Crawley and Adams will both be Season 16 leads
There is no intention of acting like Crawley’s accelerated love story didn’t happen, as she will be featured when the season starts. After she departs, Adams — who will be the second BIPOC Bachelorette lead after Rachel Lindsay — will step in and the show will pivot to her quest for love.

Crawley and Moss might be engaged already
That’s the latest from “Life & Style.” It’s unclear if this alleged proposal happened while they were still on the show. “Clare has definitely moved on with Dale in some capacity, we don’t have confirmation they were talking pre-show but we assume they were, and her story will be shown when the season airs in September,” Reality Steve tweeted. “That’s where we’re at right now. Will update as I hear anything more.”

But Clare has definitely moved on with Dale in some capacity, we don’t have confirmation they were talking pre-show but we assume they were, and her story will be shown when the season airs in September. That’s where we’re at right now. Will update as I hear anything more.

“The Bachelorette” will premiere in the fall
Still no premiere date yet, but remember, the show has a new day now: It will air on Tuesdays at 8/7c.