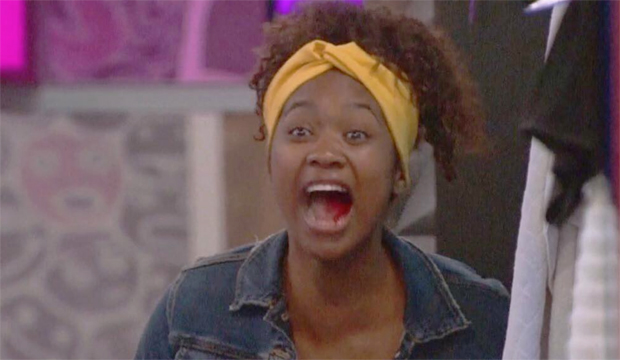 Many of the “Big Brother 22: All-Stars” contestants have played alongside each other before, but one duo will always be remembered for their epic fight in Season 20 in which, yes, blood was spilled. To recap, Bayleigh Dayton and Tyler Crispen attended a house meeting midway through the summer of 2018 so that Haleigh Broucher could confess to being the Hacker who secretly nominated Tyler and then later nullified his eviction vote. All week long the houseguests had falsely accused Bayleigh of being the Hacker, so this was Haleigh’s way of clearing the air.

Unfortunately, as is often the case with “Big Brother” house meetings, things didn’t go according to plan. Re-watch Bayleigh and Tyler’s “BB20” fight from the August 9, 2018 episode in the flashback video below.

Bayleigh publicly accused Tyler of throwing his showmance partner Angela Rummans under the bus, claiming he wanted Angela to go up on the block the previous week if the Veto was used. But Tyler denied the accusation, insinuating Bayleigh had completely mischaracterized their conversation.

“How about this, Tyler? You’re caught,” Bayleigh stated in front of the entire house. “The way that you treated me this week was trash,” she added, referring to several instances when she tried to have conversations with him and he shut her down.

As she became more agitated, a wide-eyed Tyler responded, “You’re screaming at me and [Haleigh] is the one that did this to you. She’s the one that set you up” because of the Hacker twist.

On her way out of the room, Bayleigh bent over and calmly replied, “She was trying to set you up, sweetheart. She never meant for me to take the fall.”

SEENo, Janelle did not waste her Safety Suite pass on ‘Big Brother 22’

“There is no reason for me to throw Angela under the bus,” Tyler proclaimed. “You know it. I don’t care how much you want to scream and yell and throw personal shots at me. I did not do that. Everyone knows I didn’t do that. You’re the one that lied to everybody about not having a power and then got called out about it.”

Bayleigh shot back that the reason she received a special Power App in the third week was because America felt bad for her when her future husband Christopher “Swaggy C” Williams was evicted early. She then apparently bit her lip, as blood started pooling in her mouth. “Swaggy got backdoored and I was left in this house by myself,” she shouted. “That’s why I got the power. I didn’t ask for it. Like, are you kidding me? You are terrible! You made my life in this house a f***ing hell!”

After she slammed the door to the bedroom, an exasperated Tyler threw his hands up in the air. “Oh my God, how did that get so far? I am not a villain like that, Bayleigh. Come on!”

As of this writing, Tyler and Bayleigh have been in the “BB22” house for almost a week and it’s still not clear whether they’ve mended fences or if there’s some lingering animosity. Find out what happens when “All-Stars” returns on Wednesday night.