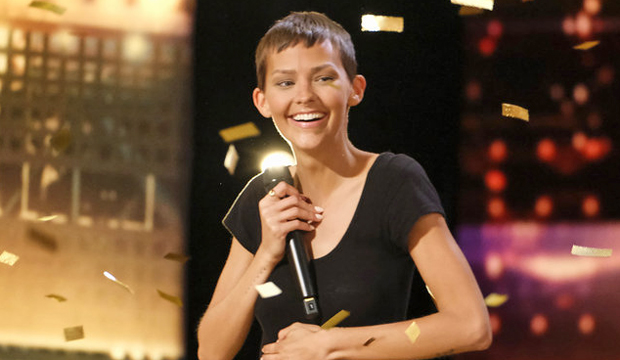 The 16th season of “America’s Got Talent” kicked off June 1 with all four judges returning to the panel: Simon Cowell, Sofia Vergara, Heidi Klum and Howie Mandel. Throughout the summer, dozens of talented singers, dancers, magicians, etc. will grace the “AGT” stage in the hopes of impressing the judges … and America. But only one act can go the distance and win the title and the $1 million prize that goes along with it. Who will it be? Below, take a look at our picks for the best acts of “America’s Got Talent” Season 16 (so far).

Nightbirde (Singer)
The angel-voiced crooner’s June 8 audition of her original song “It’s Okay” ended with a golden confetti shower. At the age of 30, Nightbirde (also known as Jane) wrote the tune about her battle with cancer in her lungs, spine and liver. She later explained the doctors have given her only a 2% chance to live. All the judges were in unison that Nightbirde deserved to move on to the next round, but Simon said he wasn’t going to give her a “yes” vote … because he wanted to press his Golden Buzzer instead.

Patrick Kun (Magician)
The Pittsburgh resident is newly married, but revealed his wife isn’t such a big fan of magic anymore because, “She thinks I love magic more than her.” Patrick’s June 8 audition featured various close-up tricks included cards disappearing and reappearing right in front of the judges’ eyes. For his big finale, he made their signed cards inexplicably appear inside a sealed case. “There are certain things that can’t be explained, which means it’s magic,” Simon raved.

Northwell Health Nurse Choir (Chorale Group)
These front-line workers brought on the waterworks when they performed a mash-up of “Lean on Me” by Bill Withers and “Stand by Me” by Ben E. King during their June 1 audition. Their collective message when things get rough? There is always that light at the end of the tunnel. Howie was so moved that he stated, “You stand by people you don’t know, you watch horror and you watch strength, and I thought I just want to stand by you,” before pressing the Golden Buzzer.

Peter Rosalita (Singer)
Dressed in a stylish cream-colored suit, the 10-year-old immediately endeared himself to the judges when he repeatedly tapped his microphone and asked, “Hello? Hello?” The talented tyke explained how he was born in Abu Dhabi, United Arab Emirates but now lives in the Philippines. For his June 1 audition, Peter took on Celine Dion‘s classic ballad “All by Myself.” Heidi thought he was “incredible” and that his powerful voice could “explode glass.”

World Taekwondo (Demonstration Team)
Their June 15 audition blew away the judges (and viewers at home) thanks to their spectacular martial arts skills and their positive motto: “Peace is more precious than Triumph.” The athletic team hails from South Korea and the United States, and they only auditioned for “AGT” because they weren’t able to perform at the Tokyo Olympics due to the Covid-19 pandemic. Terry Crews excitedly pressed his Golden Buzzer for the group, proclaiming he’d “never, ever seen anything like this in [his] life.”

T.3 (Harmonic Trio)
T.3 has only been together for a little over a year, but they already sound like they’ve been working together for decades. The New Yorkers originally synced up when one of the guys DM’ed the others after seeing their YouTube videos. “So we put together a little group, and we’ve been doing it every week for 14 months now,” they revealed. Their June 15 audition of “Into the Unknown” from “Frozen 2” marked the first time they performed on a big stage, after singing in a staircase for much of the past year.