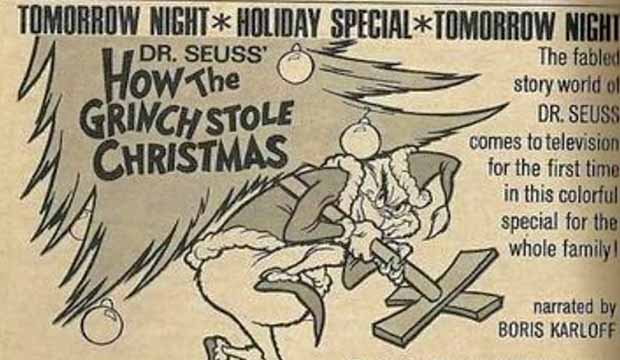 I’m not gonna lie, there’s been a lot of debate around here about what the best Christmas specials are and why. In fact, sometimes it’s gotten downright nasty around the office – and by “office,” of course I mean each of our homes, because that’s just how we roll. You can understand how heated discussion like this can get, because even a Jew like me has his favorites. See, even though I was Jewish, my family had Christmas trees and discussion about Santa Claus coming down the chimney and chestnuts roasting and the singing of carols off-key, because we basically secretly (or not so secretly) wanted to be Christian so we wouldn’t have to pretend to be just as happy celebrating Hanukkah and getting socks and coloring books as gifts while all the goyum seemed to be having the greatest time of their lives and so I grew up with religious confusion and holiday season malaise and a sense of isolation and…

Wait, where was I? Oh yeah – the joy of the Christmas season as expressed in TV specials. It’s so easy to go off on meaningless tangents this time of year. While watching these specials, I experienced all sorts of yearning. I wanted to be just like the characters in these specials, at least the ones who weren’t depressed and/or pathetic. Meanwhile, I’d sit around and wait for the Hanukkah specials that never came, making me feel even more excluded than if I’d never turned on the TV in the first place. Mind you, these feelings of disconnection weren’t restricted to my childhood but happened as recently as, oh, a few hours ago. I think it all must go back to when my mother decided to bottle-feed me shortly after emerging from the womb. She never…

Oh my God, how embarrassing. Another tangent. We’d best get to the 25 greatest TV specials before it happens again.

Ralph Bakshi of “Fritz the Cat” fame conceived and directed this special that was actually an unsold pilot for Nickelodeon, telling the animated tale of a town where all the the discarded stuff comes to life and starring a doll and stuffed dog.

An animated half-hour developed for CBS, and based on the beloved “Elf on the Shelf” books, that surrounds a young elf who helps Santa determine who’s naughty or nice taking on an assignment to help restore a 9-year-old boy’s belief in Christmas.

The schmaltzy premise of this charming Apple TV+ offering finds the singer being enlisted by the North Pole to intervene in a crisis. Seems Santa needs a hand spreading Christmas cheer. It’s Mariah Carey to the rescue, with assists from Ariana Grande, Jennifer Hudson and Snoop Dogg.

This Pixar-produced special for ABC found Tom Hanks and Tim Allen reprising their roles as the voices of Woody and Buzz Lightyear, respectively, in a plot that finds the toys taking on a group of aggressive new Battlesaurs dino toys. Lightweight but fun.

In this animated adaptation of the Dickens classic, Mr. Magoo (voiced by the great Jim Backus) is the miserly Ebenezer Scrooge. As it it wasn’t politically incorrect enough to feature a lead character who is elderly, legally blind and never takes responsibility for his actions. Enjoy, kiddies!

One of those star-studded holiday variety extravaganzas of yore, with legendary crooner Bing Crosby playing host (and dying before principal photography was completed). The campy highlight is Bing’s duet on “The Little Drummer Boy” with (drum roll, please) David Bowie.

Renowned for how outrageous it was, this infamous short film that was produced between the original “Star Wars” and “The Empire Strikes Back” finds Chewbacca and Han Solo attempting to visit the Wookiees home planet of Kashyyyk to celebrate Life Day. Mitigating factor: It was co-written by Bruce Vilanch and costars Harvey Korman and Bea Arthur.

It’s a very cool 3D computer-animated featurette from Disney that features the characters from “Frozen” that finds Olaf the snowman teaming up on a merry mission with Sven the reindeer. Voiced by Josh Gad, Kristen Bell, Idina Menzell and Jonathan Groff.

A visually arresting and moving stop-motion animated special from the legendary Rankin/Bass Productions that depicts a young Jewish boy, scarred from an unspeakable crime against everything he holds dear, finds his life changed forever upon meeting three wise men on their way to Bethlehem. Jose Ferrer is among the voices.

It’s Christmastime in Bedrock, are we are urged to check our disbelief at the door, as theoretically it’s the Stone Age and Jesus wouldn’t be born for eons. But no matter. Santa is in need of desperate help delivering presents, and Fred and Barney are just the guys for the job.

Yet another stop-motion animated extravaganza from the good folks at Rankin/Bass Prods. Hollywood legend Mickey Rooney plays the voice of Santa, who decides he’s had it with the whole Christmas thing and leaves it to Mrs. Claus and his elves to save the holiday.

Jim Henson himself wrote this 52-minute special (and even makes a cameo appearance at the end) that features various puppets from throughout the Muppets universe, in a tale that finds the Muppets surprising Fozzie Bear’s mother with a Christmas visit to her farmhouse when in fact she’s already fled to Malibu.

Stop-motion animation carries the day here yet again,. with comedian Buddy Hackett doing the narration of a special that originally aired on NBC and weaves the story of how Jack Frost once turned human to help a knight win the heart of a lady.

Set at the turn of the 20th century in the fictional town of Junctionville, NY, this charming animated effort involves Santa Claus getting his whiskers in a twist over an an0onymous letter to a newspaper claiming he doesn’t exist. It’s based on the famed 1823 poem that opens with the title line.

Directed by Muppet master Henson, it’s an agreeably strange mixture of heart and strangeness in relating the Christmas tale of a family of poor, bluegrass-loving otters. The special features narration by Kermit the Frog.

This inspired Netflix effort in Bill Murray’s attempt at both spoof of and homage to the great Christmas variety shoes of the past, directed by Sofia C0ppola and with an impressive ensemble cast including Amy Poehler, George Clooney, Chris Rock, Maya Rudolph, Rashida Jones, Miley Cyrus and Michael Cera.

Based on the Bloom County comic strip from cartoonist Berkeley Breathed, this wonderful gem of a holiday special casts Opus the Penguin and Bill the Cat in the story of the aerodynamically-challenged Opus’ attempts at flight. Sweet and i9nspired.

This beloved holiday classic tells the story of how Rudolph the Red-Nosed Reindeer came to be, featuring Mr. Christmas himself, Burl Ives, as Sam the Snowman. We know that by the end, Rudolph will be able to play in plenty of reindeer games, after all – and that fills us with joy.

The best-known and most loved of all the Peanuts specials, it’s abut how poor mocked Charlie Brown has a rough and depressing time of it at Christmastime when he tries to organize a school pageant and even when he tries to get a Christmas tree. But even his droopy wonder will ultimately rise to the occasion and the day will be saved in the end.

The first-ever TV special to feature the character of Frosty and narrated by the great Jimmy Durante, it details how the snowman comes to life with an assist from a certain magician’s hat placed on him by7 a group of schoolchildren. The kids then scramble in a race against time to get Frosty to the North Pole before his inevitable date with meltdown. A wonderful gen of a special.

Long before the Jim Carrey movie, there was this mid-1960s animated classic voiced by horror film maven Boris Karloff (as Mr. Grinch) based on Dr. Seuss story about the surly green dude who decides on Christmas Eve to deny the residents of Whoville their joyous yuletide celebration. The greatest holiday special of ’em all.