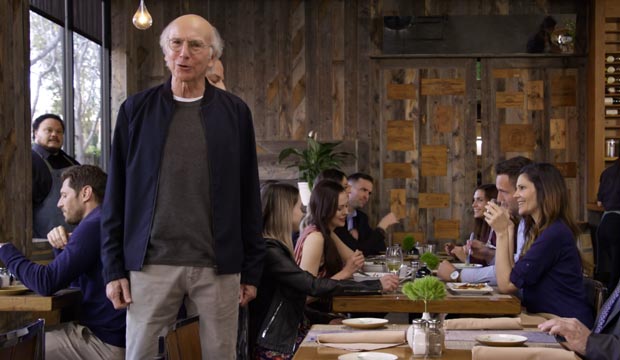 You may not realize it, but 20 years ago, us mortals were delivered a gift from the higher powers of comedy. I’m referring to Larry David’s hilarious and groundbreaking program, “Curb Your Enthusiasm,” which premiered on HBO precisely two decades ago on October 15, 2000.  To help celebrate the prettaaay, prettaaay good run that the show has had, we at Gold Derby are ranking the 20 best episodes of the Emmy-winning show for its 20th anniversary. Scroll through our photo gallery and see where your favorite episode is ranked.

The show centers on David, playing a somewhat fictionalized version of himself, and the often inane and neurotic interactions he has with with those that are closest to him. Among the people in this orbit are his much-more-grounded wife Cheryl (Cheryl Hines), his manager/best friend Jeff Greene (Jeff Garlin) and Jeff’s wife, Susie Greene (Susie Essman), who is always at least irritated with whatever Larry is up to. The sixth season saw the addition of a new regular character in Leon Black (J.B. Smoove), the brother of a family matriarch that moves into Larry’s house after they were displaced by a hurricane. Even after the woman and her family move out of Larry’s house, Leon continues to live with Larry.

The idea for the show was first conceived with David’s 1999 HBO special, “Larry David: Curb Your Enthusiasm.” The special shows Larry returning to performing stand-up comedy for the first time since “Seinfeld” premiered, while interspersing scenes of Larry pitching HBO on having his own comedy special. One year after the special aired, “Curb Your Enthusiasm” premiered its first season on October 15, 2000. The trademark feature of the show was the fact that there was no formal script for the episodes. Rather, Larry would write a detailed outline for the actors indicating what had to be accomplished in a scene and the actual dialogue would be completely improvised by the actors. So far, the show has aired ten seasons with an eleventh one having been greenlit.

The reaction to the series from critics was near-universal acclaim. Allan Johnson of The Chicago Tribune said it was, “An insanely funny romp thanks to its unique storytelling technique and an inspired performance by the star.” Phil Gallo, writing for Variety, declared, “No one has created a funnier TV character this fall. It’s a show viewers will remember the following day and likely laugh at even harder than they did the first time.” The positive reactions have continued with the most recent season of “Curb” premiering earlier this year. Matthew Gilbert, of The Boston Globe, wrote that, “Even with the looseness of the scenes, David still knows how to guide the larger storylines to a climax – or, more often, a collision.”

The love for the show has also been demonstrated with the accolades that the show has picked up over its 20 year run. So far, it has amassed 47 Emmy nominations including nine nominations for Best Comedy Series. The show has picked up two trophies over the years: Best Comedy Directing in 2003 for Robert B. Weide (“Krazee Eyez Killa”) and Comedy Single-Camera Picture Editing for Steve Rasch (“Palestinian Chicken”). The show also picked up the Golden Globe Award for Best TV Series – Comedy in 2002. Upon receiving the trophy, David said, “This is a sad day for the Golden Globes. It is, however, quite a good day for Larry David. I suspect the wife will be a little forthcoming tonight. This is what I have to do for sex. I have to win an award. Thank you, Hollywood Foreign Press Association, for what I hope will be a memorable evening.”

Can you figure out which episode was ranked #1 in our gallery? Some of the top episodes in our gallery include, “The Survivor,” “Grand Opening,” “Opening Night” and “The Doll.”