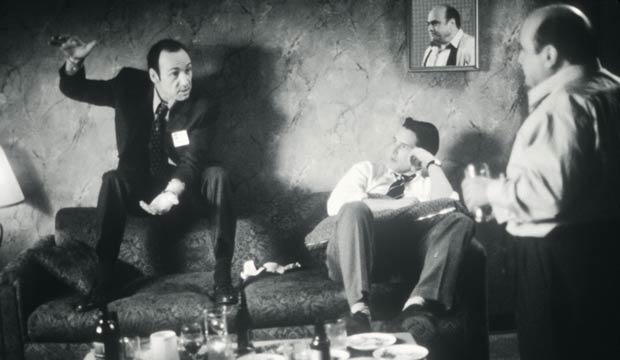 Emmy-and-Golden Globe winning actor. Oscar-nominated producer. Director. Writer. In his 50 years in the industry, Danny DeVito has worn many hats, becoming one of the most successful and popular entertainers of his generation.

Daniel Michael DeVito, Jr. was born on November 17, 1944, in New Jersey, with multiple epiphyseal dysplasia. Also known as Fairbank’s disease, this rare genetic disorder affects bone growth and contributed to his short stature. This has not hindered his successes, beginning with his training at the American Academy of Dramatic Arts and early work in the theater.

In 1975, DeVito successfully reprised his off-Broadway role in “One Flew Over the Cuckoo’s Nest” in the film version, and soon found success as Louie DePalma in the television sitcom “Taxi,” for which he received four Primetime Emmy and four Golden Globe nominations, winning the Emmy in 1978 and the Globe in 1980. Louie was the arrogant dispatcher of the Sunshine Cab Company who rules over the drivers from his cage, taunting and bullying them. This smug but lovable persona would become one of the most memorable characters in television history and carry over into many of his future roles.

SEETim Burton movies: All 19 films ranked from worst to best

His continued success allowed him to co-found his own production company, Jersey Films, which is responsible for such films as “Pulp Fiction” (1994), “Get Shorty” (1995) and “Man on the Moon” (1999), which chronicled the unusual life of his “Taxi” co-star Andy Kaufman. His production team earned a Best Picture nomination in 2001 for the film “Erin Brockovich.” His distinctive gravelly voice has given life to many cartoon characters, including Mr. Swackhammer in “Space Jam” (1996), Herb Powell in “The Simpsons” (1991, 1992) and Philoctetes in Disney’s “Hercules” (1997).

Having worked consistently in some aspect of the entertainment industry for 50 years, DeVito shows no signs of slowing down. In 2004, he received his fifth Primetime Emmy nomination as a guest actor for his hilarious turn as a stripper on the sitcom “Friends.” In 2017, he received a Tony nomination for his Broadway debut in Arthur Miller‘s “The Price.” Since 2006, he has portrayed the character Frank Reynolds on the sitcom “It’s Always Sunny in Philadelphia.” In 2019, he appeared in Tim Burton‘s live action “Dumbo,” and is currently involved in a sequel to his hit “Twins” called “Triplets.”

In 1971, DeVito met fellow actress Rhea Perlman, and they moved in together two weeks later. They married in 1982, have three children and have co-starred in many projects, including episodes of “Taxi” and as the parents in “Matilda.” Since 2012, they have separated and reconciled a couple of times, and are currently separated. However, both have indicated that they continue to be on good terms and neither seems to be planning to divorce.

Tour our photo gallery, which ranks his 15 greatest film performances from worst to best.