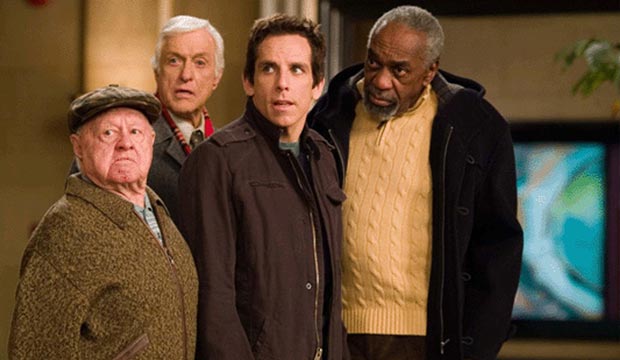 At 5’2, Mickey Rooney may have been small in stature, but he had a huge personality and was one of the biggest stars in the heyday of the Golden Era of Hollywood. He had one of the longest careers of any entertainer, with a body of work that spans nine decades in the industry, including vaudeville, films, television, radio and the stage.

Rooney was born Joe Yule, Jr. on September 23, 1920, in Brooklyn, New York, so his fans around the world are celebrating his 100th birthday! At 17 months old, he made his stage debut in his parent’s vaudeville act, and made his motion picture debut in 1926. In 1927, he starred in the first of several short films in the “Mickey Maguire” series, and adopted the stage name “Mickey Rooney.” He made 78 of these comedies, and also received great notices in films such as “A Midsummer Night’s Dream” (1935). Then in 1937, he made the film that would establish his star status. “A Family Affair” was the first of 16 films in which he played the popular character Andy Hardy, the rambunctious and girl-crazy teenage son to the wise Judge James Hardy. Andy often found himself in “girl trouble,” with the likes of such MGM starlets as Lana Turner, Ann Rutherford and, most famously, Judy Garland.

In 1937, Rooney and Garland appeared in their first of 10 films together, “Thoroughbreds Don’t Cry.” They became extremely close, remaining friends until her death in 1969, and he always spoke with great love of her and their friendship. This genuine affection came across in their many romantic musicals, the best of which is “Babes in Arms,” (1939) for which Rooney became the first teenager to receive an Academy Award nomination for Best Actor.

The popularity of these films and the Andy Hardy character made Rooney the top box-office star in 1939, 1940 and 1941, beating out the likes of Clark Gable, Spencer Tracy, James Cagney and Errol Flynn. Rooney was one of the most versatile actors in that generation, with his ability to sing and dance and play musical instruments, his dead-on comedic timing and his ability to transition to more dramatic roles. In all, in made more than 300 films between 1926 and 2014, acting up to the time of his death, with his final two roles released posthumously, in the films “Night at the Museum: Secret of the Tomb” (2014) and “Dr. Jekyll and Mr. Hyde” (2017). He has an acting credit almost every one of those almost 90 years, whether it be in film or television, or on stage.

One of the few breaks in this career came in 1944, when Rooney was inducted into the United States Army. His contribution to the war effort was entertainment, as he spent 21 months performing for troops in America and Europe. He was awarded the Bronze Star Medal for entertaining troops in war zones, in addition to other medals, such as the Army Good Conduct Medal. However, this break in his career caused him problems when he returned home, as he was now too old to play his popular teenage characters, and he did not have the “look” of a leading man. But the cocky Rooney was nothing if not resilient, and his incredible talent would not go to waste.

Besides receiving his second Oscar nomination in 1944 for “The Human Comedy,” Rooney starred in a couple of radio series in the late 1940s, and appeared in his first television series, “The Mickey Rooney Show” (1954-1955). In the 1961 film “Breakfast at Tiffany’s,” he portrayed his most controversial character, Mr. Yunioshi, which has been criticized over its negative portrayal of Asians. He later said he never would have done the role had he known it would upset people. He would lend his distinctive voice to animation in later years, including the voices of Santa Claus in the stop-motion classic “Santa Claus Is Coming to Town” (1979) and Tod in the Disney classic “The Fox and the Hound” (1981). In 1979, he made his Broadway debut in “Sugar Babies,” alongside Ann Miller, and received a Tony nomination for his performance. The acclaimed play ran 1,208 performances in New York and then toured for five years.

Rooney’s first professional recognition was a Juvenile Oscar the Academy bestowed upon him for his his work in “Boys Town” (1937), and he would receive four more nominations. Besides the Best Actor nominations for “Babes in Arms” and “The Human Comedy,” he received noms in the supporting category for “The Bold and the Brave” in 1957 and “The Black Stallion” in 1980, and in 1983, was finally presented an Honorary Oscar for 50 years of memorable characters in the film industry. He won two Golden Globe awards, for Best Male TV Star in 1964 for “Mickey” and for his moving performance in “Bill” in 1982. Rooney’s performance as the mentally disabled “Bill” also garnered him his only Primetime Emmy in 1982. He received nominations for a “Playhouse 90” episode “The Comedian” (1958), an “Alcoa Theatre” episode “Eddie” (1959), “The Dick Powell Show” episode “Somebody’s Waiting” (1962), and for the sequel to his win “Bill: On His Own” (1983).

Rooney’s personal life was as colorful as his professional. As happens with many child actors, he struggled with addiction, most notably a sleeping pill addiction he overcame in 2000 and a gambling addiction that led to two bankruptcies. He loved beautiful women, and was married eight times, the first being to starlet Ava Gardner in 1942, when she was only 19 years old. That marriage only lasted a year, and Rooney gained a reputation for being a ladies man and seemed to have trouble remaining faithful. His fifth marriage to Barbara Ann Thomason ended when she was killed in a murder-suicide by her secret lover. His last marriage to Jan Chamberlain lasted the longest, from 1978 to his death in 2014. However, they were separated in 2012 after he claimed his was a victim of elder abuse by her son. In March of 2011, Rooney appeared before a special U.S. Senate committee that was considering legislation against elder abuse. He spent his final years in the care of his stepson. On April 6, 2014, Rooney died at the age of 93 from natural causes. He left behind nine children and two stepchildren, 19 grandchildren and numerous great grandchildren.

It’s terribly difficult to sum up such a huge career and life into one small article. Mickey Rooney was truly one of the greatest entertainers to have ever lived. Many of his contemporaries considered him so: Laurence Olivier once declared Rooney “the best” and in his autobiography, Marlon Brando claimed that Rooney was “an unsung hero of the actors’ world. . . he could do almost anything.” Tough film critic James Agee wrote, ” I am quite sure about Mickey Rooney: He is an extremely wise and moving actor. . .” Director John Frankenheimer claimed Rooney to be “the best actor I ever worked with.”

Tour our photo gallery above ranking his 15 best movies, including several of the ones mentioned above.