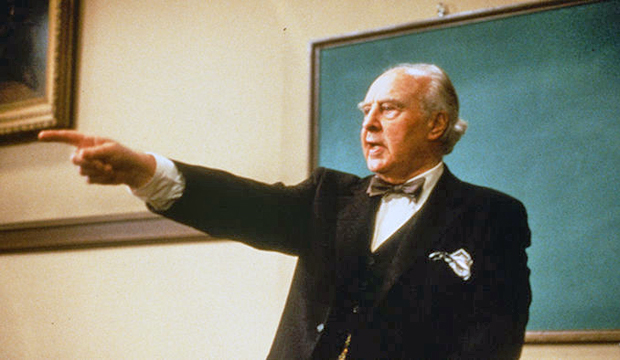 There are many who champion the idea of the Best Supporting Actor Oscar category honoring traditionally secondary roles and lament the fact that it has fallen out of fashion. Still, plenty of performances short on screen time have prevailed in the category’s 84-year history. Here is a look at the 10 shortest of all time, including the record holder:

10. James Coburn (“Affliction”)
17 minutes, 10 seconds (15.03% of the film)
After a prolific acting career, James Coburn was finally rewarded in 1999 with his first Oscar nomination and win. At 70 years old, he was the oldest acting nominee of the year, as well as the only first time nominee in his lineup. His overdue narrative certainly helped him win, but so did the skillful quality of his performance. After four decades of portraying characters with limited screen time, Coburn made abusive father Glen Whitehouse the role of a lifetime.

9. Hugh Griffith (“Ben-Hur”)
16 minutes, 51 seconds (7.57% of the film)
At the time of his win in 1960, Hugh Griffith’s was the second shortest performance to ever triumph in his category, and remains the shortest by percentage due to the film’s 212-minute running time. He also still holds the record among all acting winners for making the latest entrance in his film; his character, Sheik Ilderim, does not make his first appearance until the 1 hour, 43 minute, and 32 second mark. Also worth noting is the fact that the Academy distinctly chose to award Griffith for his short, inarguably supporting performance instead of Stephen Boyd, who had a much more prominent role in the film but did not receive an Oscar nomination despite winning the same year’s Golden Globe for Best Supporting Actor.

8. John Houseman (“The Paper Chase”)
16 minutes, 26 seconds (14.80% of the film)
In 1974, famed theatre and film producer John Houseman won an Oscar for his role as crotchety Harvard Law School professor Charles Kingsfield. Though he was nominated 20 years earlier for producing Julius Caesar, 71-year-old Houseman had just one prior film acting credit and was in fact one of an entire lineup of first time acting nominees. What likely secured his win was the brief yet memorable nature of his performance. It clearly attracted more voters than the much longer performances of Jason Miller in “The Exorcist” (44 minutes, 44 seconds) and Randy Quaid in “The Last Detail” (1 hour, 10 minutes, 41 seconds).

7. Joseph Schildkraut (“The Life of Emile Zola”)
15 minutes, 2 seconds (12.96% of the film)
In 1937, the inaugural Best Supporting Actor Oscar went to the nominee with the most screen time: Walter Brennan, whose performance in “Come and Get It” clocks in at 39 minutes and 27 seconds. The next year’s award went to Schildkraut, the nominee with the least screen time. His performance as wrongfully imprisoned Captain Alfred Dreyfus held the record for shortest Best Supporting Actor-winning performance for 27 years, and only one performance shorter than 20 minutes Griffith’s in “Ben-Hur”) would go on to win in the category during that time.

6. Alan Arkin (“Little Miss Sunshine”)
14 minutes, 20 seconds (13.99% of the film)
After two unsuccessful Best Actor nominations in the 1960s, Arkin scored a Best Supporting Actor win in 2007 for his role as cantankerous yet supportive grandfather Edwin Hoover. Hoover’s exit before the film’s halfway mark is a major plot point and was the earliest exit for an Oscar-winning character at the time (Mahershala Ali’s Juan, who exited at the end of the first third of “Moonlight,” broke the record ten years later). Arkin went on to be nominated in 2013 for his even shorter performance in “Argo” (8 minutes, 39 seconds), giving him the rare distinction of having multiple nominated performances that clock in under 15 minutes.

5. Jason Robards (“All the President’s Men”)
12 minutes, 58 seconds (9.39% of the film)
Robards won his first Oscar for playing Washington Post executive editor Ben Bradlee, who oversaw the investigation of the Watergate scandal. Despite only appearing in a few scenes, Robards’s no-nonsense portrayal left a clearly indelible mark on academy voters in 1977. While “Network” earned five acting nominations across all four categories, it finished with just three acting wins, with Robards preventing a clean sweep. The year’s 10 supporting nominees had an average screen time of only 13 minutes and ten seconds, so the length of Robards’s performance did not set him apart. Indeed, it seems that he had the perfect amount of screen time.

4. Jack Palance (“City Slickers”)
12 minutes, 24 seconds (10.93% of the film)
1992’s Best Supporting Actor lineup consisted entirely of performances that fell between ten and 17 minutes of screen time, with an average of under 13 minutes – the lowest in the history of the category. Palance, the middle nominee, was chosen as the winner for playing tough-as-nails trail boss Curly Washburn. Like Robards in 1977, and indeed even more so, Palance’s low screen time did not set him apart from his competition. In his case, this being the well-respected actor’s third nomination and first in 38 years ensured his win.

3. Jason Robards (“Julia”)
10 minutes, 49 seconds (9.22% of the film)
In 1978, Jason Robards won his second consecutive Best Supporting Actor Oscar, once again for portraying a real life figure. As detective story writer Dashiell Hammett, he serves as lover and critic to blacklisted playwright Lillian Hellman. Vanessa Redgrave won the Best Supporting Actress award for her 17-minute, 45-second performance as the title character in the same film, making her and Robards the fourth of six supporting winner pairs whose performances totalled less than 30 minutes of screen time. Maximilian Schell was also nominated for his six-minute, 49-second performance in “Julia,” and his loss against Robards’s four-minute-longer performance seems to indicate that he did not have quite enough screen time, while Robards again had just the right amount.

2. Martin Balsam (“A Thousand Clowns”)
10 minutes, 18 seconds (8.73% of the film)
Nearly three decades after Schildkraut set the record for shortest Best Supporting Actor-winning performance, Balsam broke it with his 1966 win. However, since he only held it for a few years, he is not remembered as a record breaker, and his performance as an unemployed writer’s brother and agent is just as forgettable. It is not the type of performance that would win in the category today. Indeed, if the nominees were the same, the current academy voters would probably choose to award Frank Finlay’s 1-hour, 30-minute, and 43-second performance in “Othello.”

1. Ben Johnson (“The Last Picture Show”)
9 minutes, 54 seconds (7.84% of the film)
Just six years after Balsam’s win, Johnson set a new record for shortest performance to prevail in the Best Supporting Actor category, which he has held since 1972. At the time, only five male supporting performances with less than ten minutes of screen time had received nominations, and Johnson’s remains one of only 17. His competition, including co-star Jeff Bridges, all had screen time totals of between 25 and 35 minutes. Johnson stood out because every moment of his brief performance is meaningful. His character, Sam the Lion, has a few important scenes including one key monologue before exiting at the end of the film’s first half. He never fades into the background and there are no bits of filler in his performance, which the voters seemed to admire.