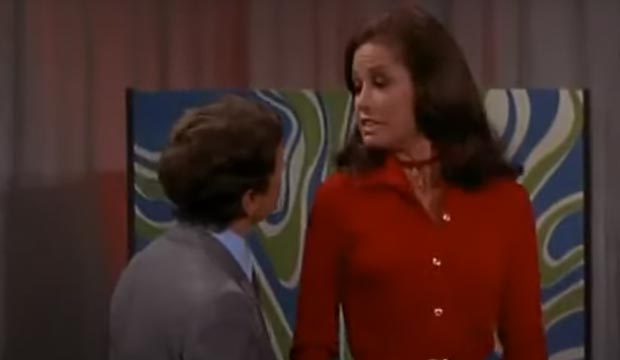 Fifty years ago she turned the world on with her smile, and we haven’t stopped laughing since. “The Mary Tyler Moore Show” debuted on September 19, 1970. It’s one of a handful of sitcoms from the CBS network that changed the way television comedies were made. Throughout its seven seasons, the show received 67 Emmy nominations, winning 29, which was a record until 2002 when “Frasier” won its 30th award. It received a nomination for Best Comedy Series each year of its run, winning for each of the last three seasons, and spawned three successful spinoffs: sister sitcoms “Rhoda” and “Phyllis” and acclaimed drama “Lou Grant.” Although the shag carpet, plaid suits and bell bottoms will forever associate “MTM” with the 1970s, the characters and stories are timeless and just as funny today as they were 50 years ago.

Mary Richards (Moore) is a 30-year-old woman who moves to the big city of Minneapolis after a bad break up. Full of self-doubt and nerves, she also has a layer of grit that helps her stand up for herself to her gruff (who’s really a big softie) boss news producer Lou Grant (Edward Asner), and earn respect among her male coworkers: the quick-with-a-quip head writer Murray Slaughter (Gavin MacLeod) and the buffoonish anchorman of the Six O’Clock News Ted Baxter (Ted Knight). Women are well-represented: sarcastic and very direct friend Rhoda Morgenstern (Valerie Harper), self-absorbed Phyllis Lindstrom (Cloris Leachman), the deceptively sweet Sue Ann Nivens (Betty White) and ditzy but sweet Georgette Franklin Baxter (Georgia Engel). Moore and Asner were each Emmy-nominated for every season, and each ended up with three wins. With a collective 33 acting nominations and 15 wins, the cast dominated much of the Emmy acting categories in the 1970s; Engel was the only one to have never won, but more astonishing is the MacLeod never even received a well-deserved nomination.

Mary is one of the first single career women portrayed on television, and the first major one whose career becomes more important to her than her love life. Rhoda and Sue Ann are also single career women, and all three women have active dating lives, including references to men staying the night. Less than a decade before, sitcoms rarely addressed controversial issues, and stuck to mainly lighter topics. “MTM” addressed topics such as discrimination, equal pay for women, infidelity, divorce, sex education. The award-winning writing team of “MTM” managed to turn such heavy topics into comedy gold, and we laugh along with Mary and her friends as they struggle to work their way through difficult situations which are timeless – which is why the show remains relatable today.

SEEMary Tyler Moore: Our personal, heartfelt tribute to the television and film star

There were also episodes which were strictly for fun, and there were quite a few recurring themes, including Mary and friends stuck somewhere due to a snowstorm, resulting in people getting on each other’s nerves, and the annual Teddy Awards, around which there was usually a mishap or misunderstanding. Some of the best moments, however, occur during Mary’s infamous dinner parties. Mary wants so much to give a good party, but something disastrous always happens – a husband takes home another woman, Phyllis despairs over her brother dating her archenemy Rhoda, Lou reveals he hates surprises right before his surprise birthday party, the lights go out before Johnny Carson is to make an appearance at one of her dinners. People hate Mary’s parties, but she still hosts them and people still come – I guess just to see what’s going to happen next!

And what is a great show without a memorable opening? The theme song “Love Is All Around,” the logo, the clips of Mary handling life, the famous hat toss at the end – it all comes together to show us a single gal can make it on her own after all.

“The Mary Tyler Moore Show” is one of my personal favorite shows. I watched her in reruns during my growing-up years, and she was a huge positive influence on me. I wanted to grow up and live in her iconic apartment, and although that didn’t happen, I like to think that her independent spirit and forward-thinking rubbed off on me. There’s really not a bad episode out of the 168, so it was really difficult to narrow it down to 25, but here are some of the best of the best.