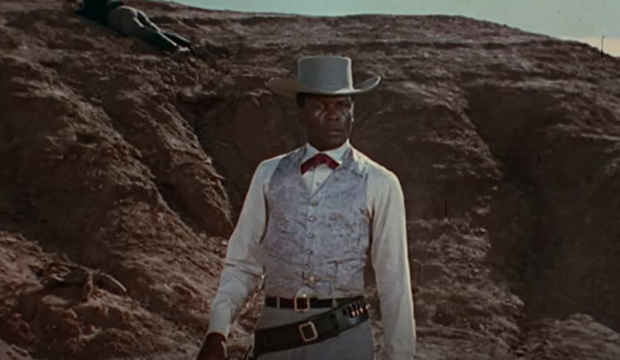 “While the events of this story are fictional…These. People. Existed.” Thus begins Jeymes Samuel’s western “The Harder They Fall,” currently streaming on Netflix. The period picture is populated with 19th century Black icons including Nat Love (Jonathan Majors), a former enslaved cowboy, Mary Fields (Zazie Beetz), the first Black star-route mail carrier in the U.S., and Rufus Black (Idris Elba), the head of the ruthless multi-racial gang of bank robbers.

“The Harder They Fall” is the first major Western led by a Black cast since Mario Van Peebles 1993 “Posse.” The director, though, told the L.A. Times that “The Harder They Fall” shouldn’t be described as simply a “Black” Western. “It’s just a story about these people in their own world, just like ‘Rio Bravo” is a story about John Wayne and Dean Martin in their own world,” Samuel said. “These aren’t white Westerns or white movies, they’re just movies.”

Still, he wanted to do a movie focusing on black people who existed “to once and for all dead the argument that we [didn’t] exist in the Old West. Hollywood just whitewashed that whole period, so in order to put it on a huge canvas, I made a fictional story but put all of these real-life characters in it.” But long before Van Peebles, Elba, and Majors saddled up, there were pioneering Black actors who brought Western heroes to the big screen.

Herb Jeffries
With the advent of sound, audiences couldn’t get enough of singing cowboys like Roy Rogers, Gene Autry and even John Wayne (dubbed, of course) as Singing Sandy in 1933’s “Riders of Destiny.” But Black audiences didn’t have a Western hero. Enter Herb Jeffries. The popular jazz singer of mixed race appeared in five successful black cowboy musicals including 1937’s “Harlem on the Prairie” and 1939’s “The Bronze Buckaroo” usually billed as Herbert Jeffries.

Jeffries, who died in 2014 at the age of 100, talked to me in 2009 for a L.A. Times story about “race” films.  “I was a ghetto baby and came out of it,” said Jeffries, who grew up in Detroit. “We had all kinds of races; there was no segregation. When you are not segregated. I didn’t know the difference in color or ethnicity.” According to Jeffries, he was “three-eighths Negro” having a white Irish mother and a father  he ever knew whom Jeffries said had Sicilian, French, Italian and Moorish roots. “I wanted to sing jazz and you couldn’t sing with a band that was not of your own ethnicity,” he noted. “I had enough tan in my skin so I could pass for mulatto.”

In the 1930s, he began touring the South with the famed Earl “Fatha” Hines Orchestra and noticed that Black audiences were forced to go to segregated theaters. And the only Westerns they saw had white casts.  So, he decided to give them their own singing black hero. He read about Jed Buell, who was producing the infamous 1938 Western with little people called “The Terror of Tiny Town.” “I thought if the guy will do a cowboy picture with little people, he will do a cowboy picture for about colored people.” Darkening his skin with makeup, Jeffries became a sensation in “Harlem on the Prairie.” He made four more musicals over the next two years before joining Duke Ellington’s orchestra.

Woody Strode
The tall, powerful former decathlete and UCLA football star cut quite a figure in John Ford’s 1960 Western racial drama “Sergeant Rutledge.” He earned strong reviews in this post-Civil War Western as stalwart sergeant who is accused and put on trial for a double murder and rape of a young white woman. The New York Times stated: “The theme of racial tension has been firmly imprinted by director John Ford,” adding the “granite sensitivity and strength in the face of Mr. Strode, a gaunt giant of a man” dominated the film. “Almost from the outset, it is simply impossible to believe that such a proud, professional Army man would yield to heinous crimes.”

Strode later said in an interview that the studio wanted either Sidney Poitier or Harry Belafonte to play Rutledge, but Ford refused to cast either of them: “He said, ‘Well, they’re not tough enough to do what I want Sergeant Rutledge to be,”’ recalled Strode. The actor made four more films with Ford including 1962’s “The Man Who Shot Liberty Valance” and 1966’s “7 Women.” Strode appeared in many more Westerns including Richard Brooks’ 1966 “The Professionals” ;  Sergio Leone’s 1968 “Once Upon a Time in the West”; Daniel Mann’s 1972’s “The Revengers”; Van Peebles’ 1993 “Posse” and Sam Raimi’s 1995 “The Quick and the Dead,” which was released posthumously after his death on  Dec., 31 1994 at the age of 80.

Sidney Poitier
The legendary Black actor reunited with director Ralph Nelson, who guided him to the 1963 Best Actor Oscar for “Lilies of the Field,” for the acclaimed 1966 western “Duel at Diablo.” James Garner played an ex-Scout determined to find the man who murdered his Native American wife; Poitier portrays an ex-Buffalo soldier now working as a horse breaker. The two join a calvary squad that’s escorting a shipment of ammo to an isolated fort.

Six years after “Duel at Diablo,” Poitier made his feature directorial debut with 1972 “Buck and the Preacher,” in which he also starred with his good friends Belafonte and Ruby Dee. Poitier plays a former soldier who leads wagon trains of African Americans from Louisiana to Kansas and has made a deal with the Native Americans that they can shoot buffalos for food and have safe passage through their land. Belafonte plays a shady character named the Preacher who teams up with Poitier’s Buck to thwart violent white raiders intent on stopping the wagon trains from getting to Kansas.

The opening statement of the film tells of the problems freed slaves endured to start a new life after the Civil War and dedicates the film to “those men, woman and children who lie in graves as unmarked as their place in history.” Joseph Sargent was originally hired as the director but was soon replaced with Poitier. Daily Variety stated that the change was made because of “differences between the director and stars,” while Belafonte was quoted in Filmfacts recalling: “We might we well face it. We needed a Black man for a sensitive job about Black people.” Both film’s stars hoped there would be a sequel to “Buck and the Preacher,” but it didn’t burn up the box office. The two didn’t reunite until the 1974 hit comedy “Uptown Saturday Night,” which Poitier also directed.